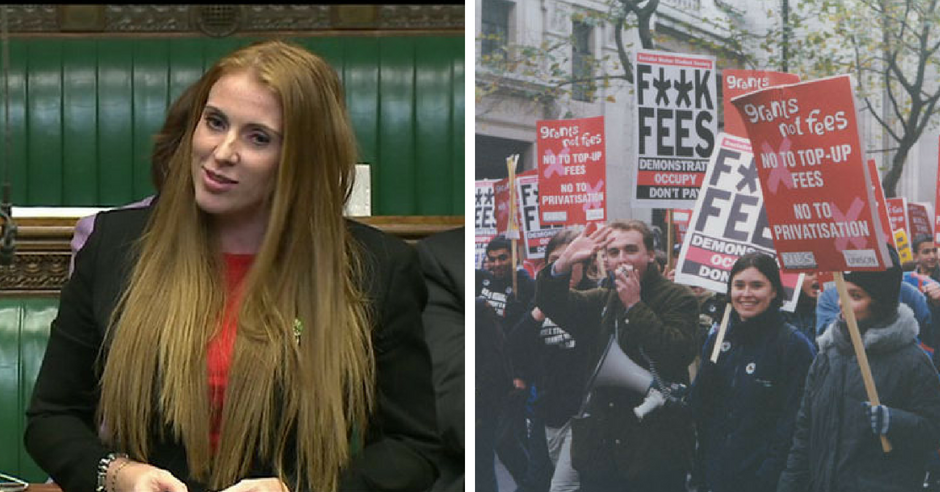 Student groups up and down the country are gearing up to lobby Labour MPs and Shadow Education Secretary Angela Rayner to table a free education amendment to the Tories’ Autumn Budget.

Socialist Students, who have around sixty branches in universities across Britain, have been at the forefront of the campaign for free education for a number of years.

Their Campaign to Defeat Fees was launched in 2006, and eleven years on, they feel that now is the perfect time to take the Tories to task and expose the fragility of Theresa May’s government.

They have penned a letter to Shadow Education Secretary Angela Rayner outlining their case, it begins:

We are writing to you today in the lead up to the Chancellor’s Autumn Budget to ask that Labour uses budget day as an opportunity to push for the full scrapping of tuition fees.

With the Tories in the midst of a severe internal crisis, and the DUP potentially unwilling to support future Tory austerity measures, a free education amendment to the Tory Budget presented to Parliament after November 22nd could threaten the Tories with a vote of no confidence, leading to the collapse of their government.

Socialist Students is therefore writing to enquire if any such plan of action currently exists, and if not to request that a free education amendment to the Chancellor’s Autumn Budget is moved in Parliament after November 22nd.

It is the view of Socialist Students that the colossal youth turnout on June 8th in support of Jeremy Corbyn’s programme was a concrete demonstration of the fact that, when given a bold and unapologetic political leadership, young people are willing to fight for a radical change to our society. In doing so, they have collectively generated a political shockwave which has pushed the Tories into a new period of crisis.”

Clearly, Socialist Students believe that adopting an amendment on free education could, in the best case scenario, bring down the government. The DUP, who are currently propping up Theresa May and the Tories, have previously supported Labour on tuition fees and the NHS.

If they are willing to make a stand during the Autumn Budget and side with a hypothetical Labour amendment on tuition fees – the already weak and feeble Tory government could end up facing a crisis of confidence even worse than the one they’re currently facing now. The letter continues:

“Already Theresa May’s government has been forced into various tactical retreats in a desperate bid to pacify the growing mood of anger which exists against Tory rule, the most significant retreat perhaps being their announcement at conference that they were freezing tuition fees at £9250 a year, alongside launching a review into student funding.

If left unchallenged however, we believe that the Tories could stagger on in power until 2022, free to wreak even further havoc on the lives of students and workers. Jeremy Corbyn after the General Election indicated that he was prepared to present an alternative Queen’s speech to Parliament in order to undermine the Tories after their majority was severely slashed at the general election.

As you will know, the DUP in late September voted in favour of a Labour Party Parliamentary motion which called for a halt to any further increases in university tuition fees. We believe that the DUP’s decision was their attempt to preserve their own basis of support within Northern Ireland by distancing themselves from the toxicity of Tory austerity and anti-working class policies.”

However, the appeal to Angela Rayner and the Labour Party goes a step further than pushing Jeremy Corbyn’s original manifesto pledge. The Tory attacks on Jeremy Corbyn supposedly saying he would write off existing student-debt were transparent to say the least. Labour made no such pledge during the General Election, and with the Tories feeling threatened by the surge in young support for Labour, they resulted to selective quoting and misinformation in order to try and stem the tide.

According to Socialist Students, however, Corbyn should genuinely consider writing off existing student debt. It would provide a clear signal to students that they are unwavering in their commitment to not only create a fairer education system, but ease the burden of those who have racked up a huge amount of debt since David Cameron and Nick Clegg raised tuition fees to £9000 a year. The letter states:

Yet of course it isn’t just tuition fees which threaten the collective future of young workers and students. Graduate debt, which at the start of this year climbed past the £100 billion mark, is a weight around the necks of thousands of students, three quarters of whom (according to the Institute for Fiscal Studies) will never be able to pay off their debt.

On October 15th, the Sunday Times reported that even the Brexit secretary David Davis had ‘urged’ the Treasury to investigate the possibility of writing down some of these historic student debts. Davis’ call is yet another indication of the panic which currently grips the Tory party.

In addition to a free education amendment, if Labour presented a separate amendment to the Budget which called for the cancellation of the student debt, this would not only potentially present another obstacle to the Tories in Parliament but would serve to build on the vast gains the Labour Party made amongst students and young workers in the general election.

Such a lead provided by Labour MPs in Parliament would strike an even greater blow against the Tories if it were organised alongside peaceful direct actions (including local protests, occupations and walk outs) on campuses up and down the country on budget day itself in support of free education and the cancellation of graduate debt.

Socialist Students would therefore like to additionally request a public statement of support for the building of such actions on November 22nd, which we are seeking to build co-cooperatively between ourselves, Labour Students groups and any other student groups willing to participate in the fight for free education.

It is not yet clear how Angela Rayner and the Labour Party will respond to this plea, nor is it clear whether they plan to table any amendments on tuition fees and education to the Tory Autumn Budget. What is clear, though, is that there is a huge demand across the country for action to be taken by the Labour Party in order to create a fairer education system that does not turn students into consumers and refuses to prioritise profit. With the Conservative government so feeble, now could be the perfect time for a movement both inside and outside of Parliament to force drastic changes to our education policy, and even a change of government.

Socialist Students have organised a nationwide day of action on campuses across the UK on November 22nd to protest the Autumn Budget and demand free education.