Home UK News Economy John McDonnell reveals that Goldman Sachs has started GROVELLING to him in... 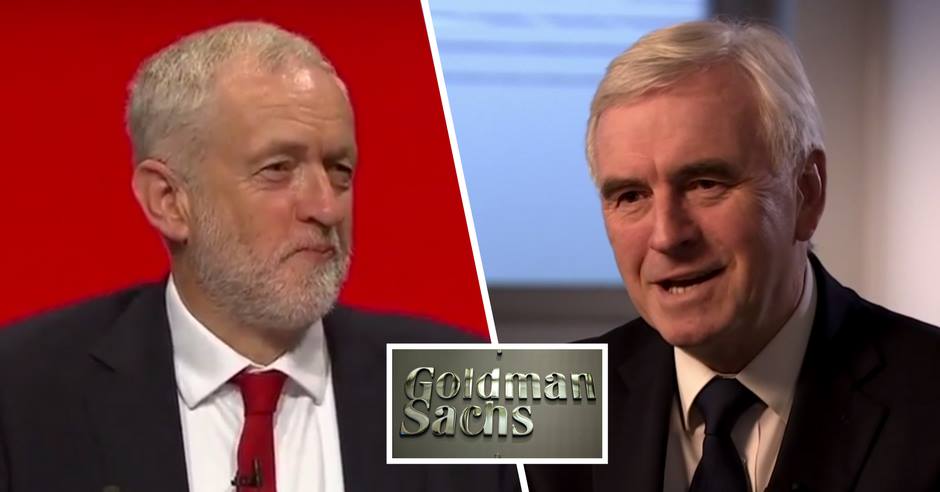 In news that reveals just how seriously businesses are taking the imminent possibility of a Labour government, the Shadow Chancellor John McDonnell has revealed that he was approached by New York-based bank Goldman Sachs to meet the Chief Executive officer of its overseas operations for talks.

The Shadow Chancellor responded to the request from Goldman Sachs by quipping:

I said of course I would… We’ll make him a cup of tea and throw in some rich teas as well.

The meeting is a further indication that big business is seriously preparing for an imminent Labour government to take charge of the country.

The request also follows a recent YouGov poll that showed seventy-five percent of business leaders think a Corbyn government could arrive within five years, with more than a third of these believing it likely.

Whilst before the General Election, business behemoth JP Morgan proposed that:

The Prime Minister’s relentless cavalcade of errors and repeated demonstrations of ineptitude have inevitably struck palpable fear into business markets across the globe, with corporations formerly reluctant to engage with a left wing agenda now coming around to the idea that neoliberalism may well be coming to an end sooner rather than later.

Indeed, Shadow Chancellor McDonnell remarked to Bloomberg how banks and businesses leave meetings with him “feeling reassured”, stating that:

The news continues a recent spree of economic policy announcements and public debate with the banks, including the revelation that the Labour party are considering plans to transfer some of the Bank of England’s operations to Birmingham, with McDonnell saying,

We want to try and locate institutions outside of London… there is a dominance of London and the southeast in decision making.

Whilst another economic headlines from last week saw Jeremy Corbyn sarcastically agreeing with Morgan Stanley in its assessment that his being leader of the UK would be a “threat” to them.

This defiant approach to the bank seems to have worked, however, with Morgan Stanley now also preparing to hold talks with McDonnell.

Best get more tea and biscuits in, John.

You can watch the Shadow Chancellor’s revealing interview with Bloomberg here: