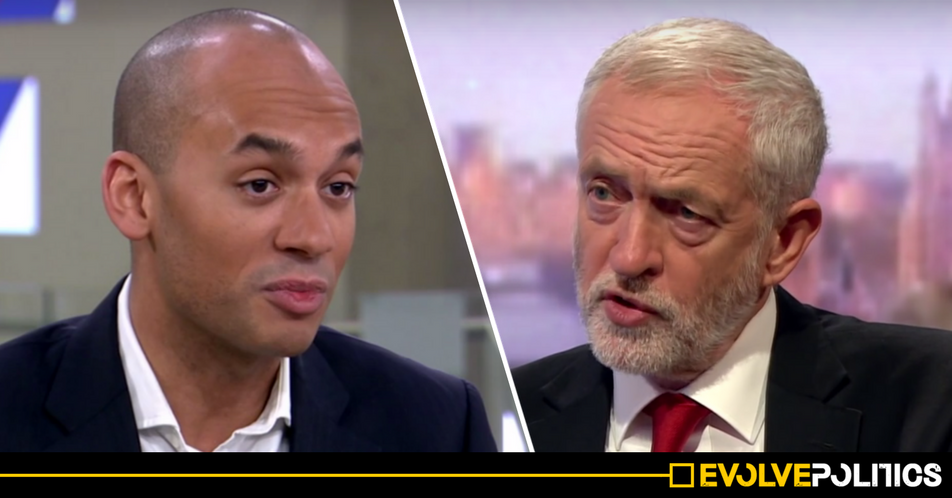 Chuka Umunna’s political record is so shameful it would even mottle the grey cheeks of John Major. The Labour right-winger supported the bombing of Syria; he voted in favour of the Con-Dem’s vicious Welfare cap in 2014, and he failed to oppose the Tories’ Welfare Bill in 2015.

Umunna backed Liz “4%” Kendall (the Murdoch candidate) in the first leadership election. He then went on to be an outspoken supporter of the multiple antidemocratic attempts to oust Jeremy Corbyn, first resigning from the frontbench in September 2015 – as part of a coordinated attack – and then backing Owen Smith in the failed coup of 2016.

As well as being contemptuous about democracy, Umunna is also derisive about Labour’s new membership, frequently adding fuel to Tory propaganda that, under Corbyn, the Labour Party has become a home for bullies, fanatics, and extremists.

But all this destructive behavour hasn’t stopped Mr Ummuna from taking to the pages of the Guardian to make a plea for Labour unity – laughable really!

The article in question is couched in terms of a conversation with Paul Mason – who Umunna describes as one of the “more thoughtful people on the left.”

But one of the points of departure between Umunna and Mason is over the issue of mandatory reselection. Umunna writes:

It is a great shame he [Mason] has been drawn into the endless and, frankly,  counterproductive talk of the deselection of Labour MPs.

Deselection (better known as mandatory reselection) is a democratic process that enables members to choose who their parliamentary candidate will be ahead of elections. It shouldn’t really be controversial. It is not even particularly radical. It is, simply put, democracy.

In fact, the same structure exists in other democratic bodies on the left. Trade union general secretaries, for example, stand for election every five years; lay union representatives stand for election between one and every three years.

Umunna is not completely opposed to deselection, however. As one of the principal agitators in calling for the deselection of Jeremy Corbyn as Labour leader, it is clear that Umunna’s views on deselection rather depend on who it is that is being targeted.

This hypocrisy is also reflected in Umunna’s new views on Labour’s membership. He states that:

The truth is that all of the shades of left – from your Marxists to your centre-left social democrats – should have a place in the Labour family. Unless they do, because of our broken First Past The Post electoral system, the left – whatever shade – will not be able to govern in any enduring way.

Yet the Compliance Unit continues to expel Marxists and socialists, and Umunna has not lifted a finger in protest. On the contrary, Progress – the faction with which he is aligned – leads the way with smears and attacks on ordinary Labour Party members.

No doubt many will also raise an eyebrow at Umunna’s self-identification as a centre-left social democrat. But it gets worse:

I subscribe to Keynesian economic theories and believe a “social market” model – where the private and public sectors work in partnership together – provides the best vehicle through which we can build a more equal, fair, democratic, sustainable and prosperous society.

And yet one of the defining features of Keynesian economics is an emphasis on public spending and investment. This doesn’t really tally with earlier comments that Umunna has made about cuts being necessary. Nor does it square with New Labour’s embrace of austerity, as opposed to investment, as a solution to the capitalist crisis. In fact, Keynesian is moer accurately used as a descriptor for Corbyn’s programme.

The best clue to Umunna’s real political philosophy is found in his mention of “private and public sectors work[ing] in partnership together” – a not-so oblique reference to Public-Private Partnerships (PPP), which were rolled out across our public services under Tony Blair. The most common form of PPP is, of course, Private Finance Initiatives (PFIs). PFIs have resulted in hospital trusts being saddled with unprecedented levels of debt – some of whom now spend more on repaying loans to private contractors than on running hospitals.

The truth is that despite protestations to the contrary Umunna, and the Blairites in general, have nothing in common with Labour’s new membership. And they certainly have nothing positive to offer a future Corbyn government.

So why this change of heart? Corbyn’s gains in the 2017 General Election have placed the Blairites squarely on the backfoot, and in the aftermath of the “shock” election result, Umunna went on the record as saying:

He’s had a brilliant campaign. Jeremy has fought this campaign with enthusiasm, energy, verve.

I think he has done a really, really good job getting across a hopeful, optimistic vision and set of policies, which we’ve advanced during this campaign. I cannot fault this campaign.

Fine words. But before accepting this Damascene conversion, we would do well to consider the implications of the civil war waged by the Blairites against their socialist leader. The constant talking down of Corbyn’s leadership abilities, the policies he stands for, and attempts to smear Labour’s new membership undoubtedly had an effect on how people voted.

The actions of Umunna and his peers directly contributed to the election of yet another Tory-led government: an unforgiveable sin, reminiscent of the cabal of Labour right wingers who split from Labour 1981 to form the Social Democratic Party, eventually allowing Thatcher to get re-elected in 1983.

In addition, the toxic pessimism the Blairites helped to instil amongst many Labour members actually resulted in a drain of vital financial and human resources from marginal seats, where they could have made a huge difference, into fighting to protect safe-seats which were never really under any threat.

Fight back against neoliberal entryism

The reason why Umunna and many like him are now offering a fig leaf to Corbyn and his supporters is because their ideas are provably unpopular, and support for right wing social democracy is in massive decline across the world. This is evident in the electoral collapse of the Socialist Party in France, PASOK in Greece, PSOE in Spain, Labour in Ireland, the SPD in Germany, and Blairism in the UK.

But right wingers remain in a very strong position in the Labour Party. With the exception of the National Executive Committee, the apparatus of the Labour Party is dominated by Blairites – a situation which flows from their dominance in parliament and local government.

The strategy that they are now pursuing is one of hanging on until a Corbyn government is elected in order to sabotage it at every turn. Corbyn cannot afford to fight a rear-guard action against Blairism whilst also taking on the towering heights of big business. This is why it is essential that reselection contests take place to ensure that a united Labour Party goes into government.

MPs have not got ‘jobs for life’. They represent their constituency but ultimately they are selected by and accountable to their Constituency Labour Party. To ensure democratic accountability and the rights of party members to select candidates that reflect their views, this branch supports the need for mandatory reselection of Labour MPs in each Parliament as essential.

We call on the [name of Labour Party branch] CLP to support a rule change to the Labour Party rulebook to reintroduce mandatory reselection of MPs before each general election.