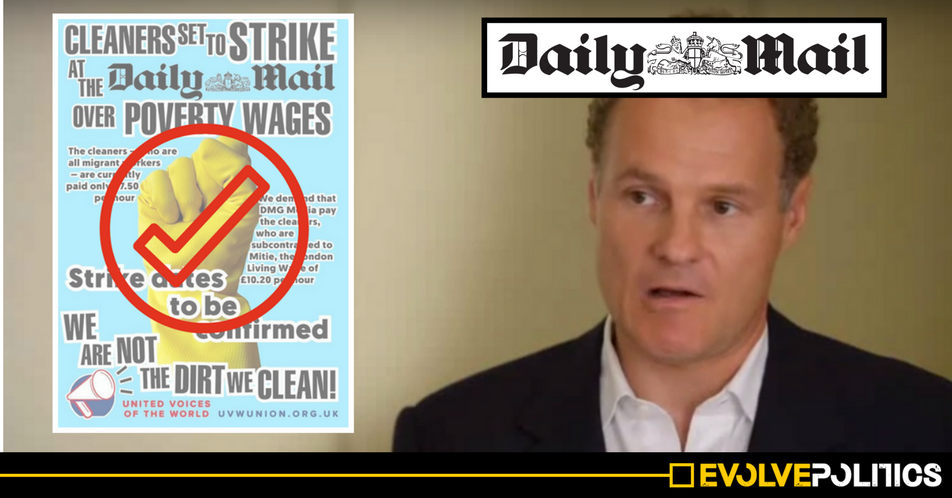 A workforce made up entirely of migrant cleaners at the Daily Mail’s Kensington offices have succeeded in their demands to be paid a fair Living Wage by their employer after unionising and threatening all-out strike action.

Following threats of an all-out strike, as of April 1st all cleaners at the Daily Mail headquarters will now receive the London Living Wage of £10.20 per hour. Workers were previously only paid the National Minimum Wage of £7.50 an hour.

The ‘historic’ victory also comes after over 100,000 people signed a petition calling on the Daily Mail Editor-in-Chief Paul Dacre – who ‘received a whopping £2.37 million’ in wages last year – to pay the Daily Mail’s migrant cleaners the London Living Wage.

Writing on the petition, the group had previously claimed that their employer had threatened to sack them all if they went ahead and took strike action – a move they said was ‘in gross violation of our trade union and human rights.‘

The petition also went on to call out the sheer hypocrisy of the Daily Mail, stating that “These offices are kept spick and span by a 100% migrant workforce. Sadly, the Mail have blamed migrants for depressing wages and yet the agency they employ choose to pay their cleaners the absolute minimum that is legally possible – a wage that keeps the cleaners in poverty – and then unlawfully suppresses any efforts to gain a pay rise.“

And now, after receiving a huge amount of support from the public, and after promising Daily Mail chiefs the prospect of ‘large and lively protests and pickets’, their bosses have finally seen sense and given in to the to the demands of the unionised workers to be paid a fair Living Wage.

The group said being paid the Living Wage would enable them “to have an acceptable standard of living in the capital, to have an adequate level of warmth and shelter, a healthy diet, and allow us better integration and to avoid chronic stress.”

Writing on the United Voice of the World Union Facebook page, a statement declaring the victory read:

A group of migrant cleaners – who are members of the trade union United Voices of the World (UVW) – have just won a historic victory at the Daily Mail.

After the threat of an all-out cleaners strike at the Mail’s offices in Kensington, and the prospects of large and lively protests and pickets, it is now confirmed that the cleaners’ demands have been met: as of 1st April 2018 they will all receive the London Living Wage of £10.20 per hour.

The cleaners – some of whom have been scrubbing and polishing the Mail’s offices for nearly 20 years and are outsourced to Mitie Group Plc, a FTSE 250 company – were previously paid only the national minimum wage of £7.50 per hour.

In real terms the cleaners have secured a 25% wage increase equating to nearly £500 extra per month per worker, or around £6,000 extra per year.

This victory will therefore lift the cleaners out of the poverty which, up until now, the Mail has cruelly constrained them to languish in.

The cleaners’ bravery in speaking out also captured the public imagination with nearly 100,000 people signing a petition, on Change.org, written by the cleaners under the pseudonym Juliana, in support of their demands.

This was no easy feat for the cleaners, none of whom had been in a trade union before let alone been on strike. Furthermore, on receipt of the declaration of a trade dispute from UVW and notice that the cleaners would be balloted for strike action, the contract manager for Mitie stormed in to the Mail’s offices and unlawfully threatened the cleaners telling them that if they ever went on strike they would immediately be sacked.

The cleaners’ courage to not let such desperate and unlawful threats intimidate them cannot be overstated.

Winning this wage increase is all the more impressive as just last month the Mail forced through £30,000 worth of cuts to the cleaning contract, clearly showing that before the cleaners made their demands the paper had no intention at all of investing a single penny more in their salaries.

The cleaners – all of whom are migrants predominantly from Latin America and Africa – also knew that they were standing up to an organisation that is responsible for churning out all manner of hateful bile about migrants, including the pernicious lie that migrants drive down wages.

Well, now the Daily Mail writers need look no further than their own offices to see that this claim is utterly false. It’s not migrant workers who suppress wages, it’s miserly and unscrupulous employers who take advantage of unorganised workers and keep them on the breadline. Perhaps the millionaire editor of the Daily Mail Paul Dacre will reflect on this before he sits down to sign off on another anti-migrant headline in an office kept clean and tidy by the very people his publication routinely denigrates.”