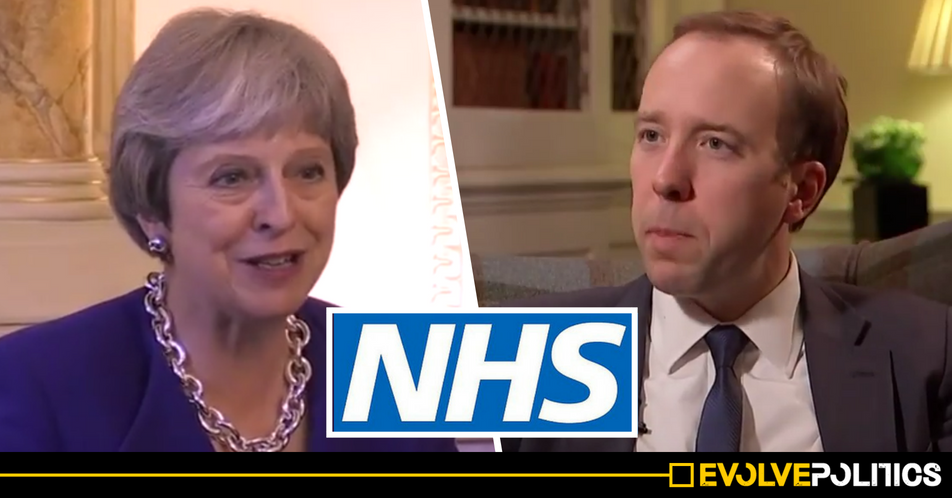 The Conservative MP who Theresa May has just promoted to take over from Jeremy Hunt to oversee our National Health Service, Matt Hancock, has received tens of thousands of pounds worth of donations from the Chairman of a notorious free-market thinktank whose clear policy it is to abolish the NHS and privatise healthcare in the UK.

From December 2010 until the present day, the MP’s Register of Interests shows that the newly appointed Health Secretary, Matt Hancock, has received in the region of £32,000 from Neil Record, who just so happens to be the Chairman of the Institute for Economic Affairs (IEA).

The IEA are a well-known free-market neoliberal thinktank who have long argued in favour of privatising the NHS.

The IEA’s Head of Health and Welfare policy, Kristian Niemietz, has also made absolutely no secret of the Institute’s desire to fully abolish and privatise the NHS, and can be regularly found on Twitter arguing firmly in favour of more private sector involvement.

Given their firm support for abolishing Britain’s most-cherished institution, it is no surprise that many on social media have raised huge concerns about the newly appointed Health Secretary’s shady financial ties to the organisation.

Further to the tens of thousands of pounds worth of donations he has received from their Chairman, the new Tory Health Secretary is also speculated to secretly share the IEA’s free-market pro-privatisation philosophy – a stance which will surely horrify pro-NHS campaigners across Britain.

Another own goal by Theresa May on appointing Matt Hancock as Health Secretary. He has been funded for years by Neil Record, chairman of ⁦@iealondon⁩, which wants to abolish NHS & privatise healthcare (via ⁦@CaveTamasin⁩) #NHS #Privatisation https://t.co/qITOjZEnXq

Some key information on Matt Hancock, the new Secretary of State for Health: He shares same neoliberal philosophy of @iealondon and has been funded by their Chairman, Neil Record, for years. IEA is a free market think tank with clear policy to abolish #NHS & privatise healthcare pic.twitter.com/iU8bUD9JAe

Were the IEA’s stance on NHS privatisation to be implemented on Britain, we would likely see our NHS abolished and turned into an insurance based system similar to that of the United States.

On average, each American citizen is estimated to pay around $300 (£226) every month for Health Insurance Premiums, and around 27,000,000 Americans are currently left completely uninsured – meaning that there is absolutely no help for them when they get sick.

Furthermore, around 600,000 people are forced to declare bankruptcy every year in the USA due to medical bills which they are unable to pay.

It’s not only the personal financial toll that should worry Brits about looming NHS privatisation, health outcomes in America are also far worse than in Britain.

As a percentage of GDP, the USA spends 17.8% on healthcare compared to just 10% in the UK. Despite this, a 2017 study by the Journal of the American Medical Foundation found that compared to 10 other countries – the United Kingdom, Canada, Germany, Australia, Japan, Sweden, France, Denmark, the Netherlands and Switzerland – the United States ranked last for life expectancy, had the worst infant mortality rates (triple that of the UK), and more infant deaths than any other country.

It is no wonder that almost 70% of Brits rank our publicly funded NHS as the number one thing that makes us proud to be British – even ranking above Britain’s decision to stand alone against Hitler and Fascism in 1940.

Last week marked the 70th year since the creation of the NHS – a milestone which was proudly celebrated across the country.

However, as much as they try to convince the public otherwise, the Conservative Party’s true stance on the NHS is as far removed from public opinion as you can get.

Labour MP Richard Burgon summed up the Tories’ duplicity on the National Health Service marvellously when he noted how all Conservative MPs were made to wear badges celebrating the NHS’ 70th birthday – a milestone which also happened to mark 70 years since the Tories voted 22 times against the creation of the institution they were now purporting to support.

At #PMQs today every Conservative MP is wearing an “NHS 70” badge – to mark 70 years since they voted against its creation.

The Tories don’t care one jot about keeping the NHS free for everyone – in part due to the fact that it completely disproves their theory that socialism cannot work.

For every second that it has existed, the NHS has made a mockery of the Tories’ self-serving, greed-based ideology – and there is no question that if they could actually get away with it, the Tories would privatise the whole thing at the drop of a hat.

However, with Theresa May now choosing to promote Matt Hancock to Health Secretary – a man who is unashamedly funded by lobbyists who want to abolish and privatise the NHS – the Tories’ mask has slipped just a little more.

Over his tenure as Health Secretary, Jeremy Hunt was allowed free reign to catastrophically defund the service and demoralise NHS staff. And now, if things couldn’t get much bleaker for a service which has heroically withstood 10 years of despicable Tory attacks, it seems that the already bought-and-paid-for Matt Hancock has now been given the task of finishing the job.