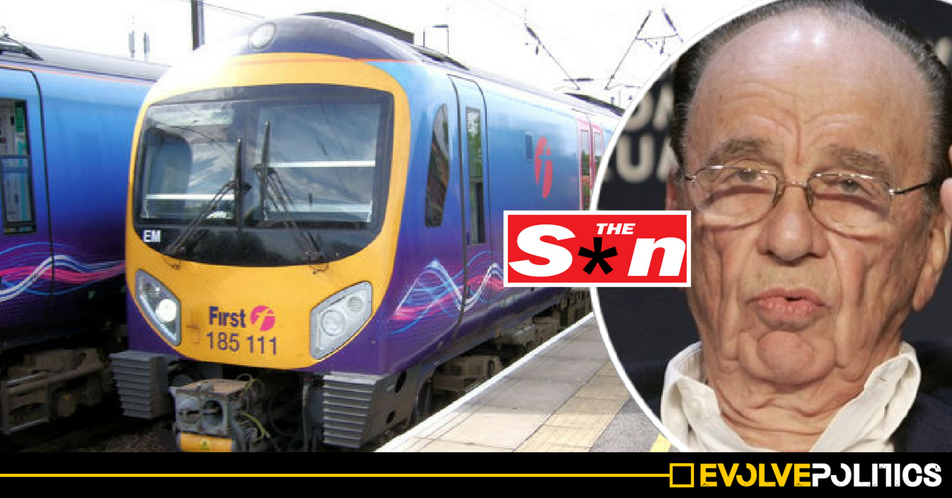 Britain’s most loathed hate-rag, The S*n, has been forced into a grovelling apology after running a story in which they vastly exaggerated the salaries of railway platform staff, ticket sellers and train drivers. In other words, the Murdoch-rag got caught out lying. Again.

In other words, many workers appear to be paid far less today than they were ten years ago – and could only dream of earning The S*n’s fabricated figure of £45,000.

The Sun’s latest fake news article projected the same mistruths about the salaries of ticket sellers, with the shameless far-right rag claiming they earned £24,000 to £27,000 in 2008 and £36,000 today.

Furthermore, train drivers are currently paid around £47,000, and not £63,000 as shown in The S*ns despicably untruthful graphic.

|AN APOLOGY|@TheSun tried and succeeded in inciting hatred against rail workers and unions by grossly overstating their salaries.

It was all completely made up and hardly any of its readers will realise. pic.twitter.com/pQpsa4FMAn

It doesn’t take much research to find that many railway staff, employed by private outsourcing companies, are in fact paid even less: current jobs being advertised on job site Indeed include train guards (£20k/year for a 42 hour week) and train dispatchers (from £7.20/hour, which would appear to be below the minimum wage).

Even a ‘station team leader’ is only offered £23k/year. But clearly doing a bit of research is not in the job description for S*n journalists: better to make up a load of lies in order to suit your political ideology and then hide a tiny little correction that nobody who read the original fake article is ever likely to find.

The Sun tried to make out, of course, that this was not a deliberate ‘error’, designed to push their readers’ ‘militant trade unionists’ buttons. No, according to the Sun they had ‘accidentally misattributed‘ the salary figures.

No malice intended, of course. Which is hard to square with the Sun’s record of hostility to trade unions, with endless smear stories and a fixation with how Jeremy Corbyn is going to ‘rip up trade union laws’ (that is, laws which restrict workers’ rights) if Labour comes to power.

Making ‘mistakes’ is nothing new for the Sun. As @SunApology points out on Twitter, this was the fourth apology issued by the Sun in eight days.

For those who are keeping count, that's four apologies issued by The Sun in eight days. pic.twitter.com/2LAKlt6bzV

But we know that their ‘apologies’ are nothing of the sort: they’re a few words buried in the back of the paper on the occasions that their foul, hate-filled lies are found out. This was one such time, but don’t expect the Sun to start printing the truth anytime soon.