Home Fake News The Sun sneakily removes ‘Brexit Bargains’ article after being told it was... 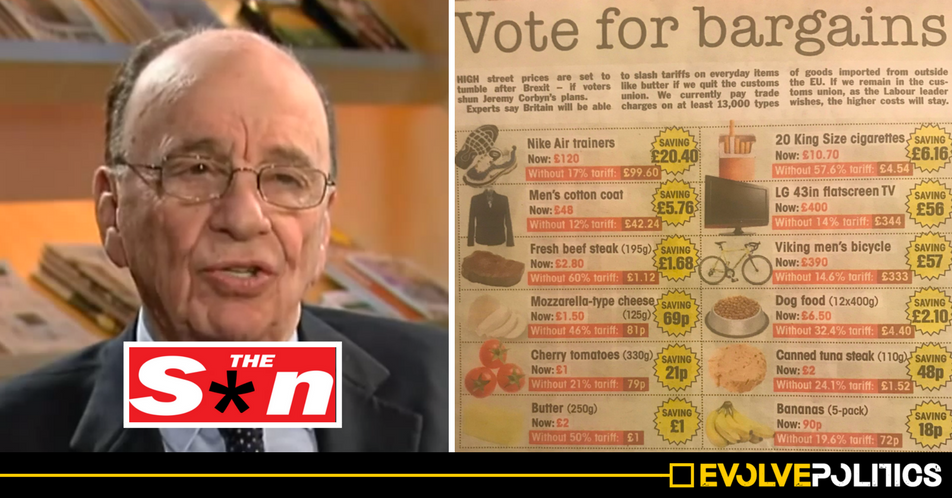 Twenty cigarettes for £4.54 after Brexit, rather than the current £10.70? Bargains on mozzarella and trainers? It all sounds rather ridiculous, but according to the Sun that’s what we can look forward to after Brexit – provided we follow the Murdoch rag’s advice and ‘reject Jeremy Corbyn’s plans’ to stay in the Customs Union, of course.

Labour recently said that it supports staying in the Customs Union after Brexit. But the Sun doesn’t like that idea at all. And, to counter Labour’s Brexit position, The Sun went about telling its readers they could expect a bonanza of savings if we leave the Customs Unions, as Britain would supposedly be able to ‘slash tariffs on everyday items like butter’.

Under the heading of ‘Vote for Bargains’,  the Sun article gave examples of all the money we would supposedly save once we reach the nirvana of a hard Brexit. And not just on cigarettes; we’d also get Nike Air trainers for £99 and ‘mozzarella-type cheese’ (which sounds a little, well, European) for just 81p, whilst that butter will only cost us £1.

However, if you’re excitedly looking for the article online to see what other bargains you’ll be able to bag, don’t bother. You’ll only get a page saying ‘Whoops! We can’t seem to find what you’re looking for.’

The Sun has now deleted this work of fiction from its website. The lie has been seen in print by millions. The new URL says it all (h/t @SAshworthHayes) pic.twitter.com/iFG10arMOn

But look closely at the URL for that Whoops! page:

It would appear that the Sun has had to remove the page on legal advice – presumably because it was an utter pack of lies.

Research by the UK Trade Policy Observatory (a joint project of the University of Sussex and Chatham House) points out that after Brexit, far from getting rid of tariffs, Britain will have to pay tariffs on items imported from the EU.

So far from going on a massive cigarette and trainer-buying spree after Brexit, all of us are likely to suffer a substantial increase in the cost of living. For those who are barely scraping by now because of Tory austerity policies, it may be the difference between living on the breadline, and destitution.

The Sun’s sneaky removal of its piece comes after many on social media had told them that the piece was a total pack of lies, with Another Angry Voice (AAV) writing a brilliantly forensic destruction of The Sun’s ridiculously numerically-challenged piece here:

One of the most obvious problems (with The Sun’s article) is that a significant number of the items mentioned are produced within the EU.

Why would you worry about paying a tariff of fake mozzarella-style cheese when membership of the European Single Market means that we can buy genuine mozzarella from Italy with no tariff at all, and be sure that you’re buying the genuine thing because of protected designation of origin labelling rules?

Then there’s the supposed saving on beef. Why on earth wouldn’t you just eat British or Irish beef that come with 0% tariffs, rather than crying that you have to pay a tariff on imported hormone-riddled beef from the United States?

Aside from beef and mozzarella, there are numerous other products that could easily be purchased tariff free because they are mass produced in the EU, like cherry tomatoes, butter, and dog food.

Then there’s the LG flatscreen TV. It’s hardly a secret that the EU has a bilateral Free Trade Agreement with South Korea, meaning that tariffs of South Korean flat screen TVs have already been eliminated.

Before summing up the sheer audacity of The Sun’s attempted journalism by saying:

Perhaps the most shocking aspect of all is the disgraceful mathematical illiteracy of the whole thing. Take the butter as an example. If the butter costs £1 originally but has a 50% tariff applied on it, then the price rises to £1.50, not to £2.

The same goes for all of the other calculations too. Every single one of them have been made by someone so innumerate they’d fail Year 6 maths.

If the Brexiteers are so innumerate that they can’t even cope with simple mathematical operations that my 9 year old son can understand, then who on earth would trust their judgement on an issue as complex as Brexit?

The Sun is well known for its fact-free journalism, and the @SunApology Twitter account is never short of stories. Blaming Jeremy Corbyn for the price of cigarettes is just the latest barrel-scraping offering. Expect plenty more.