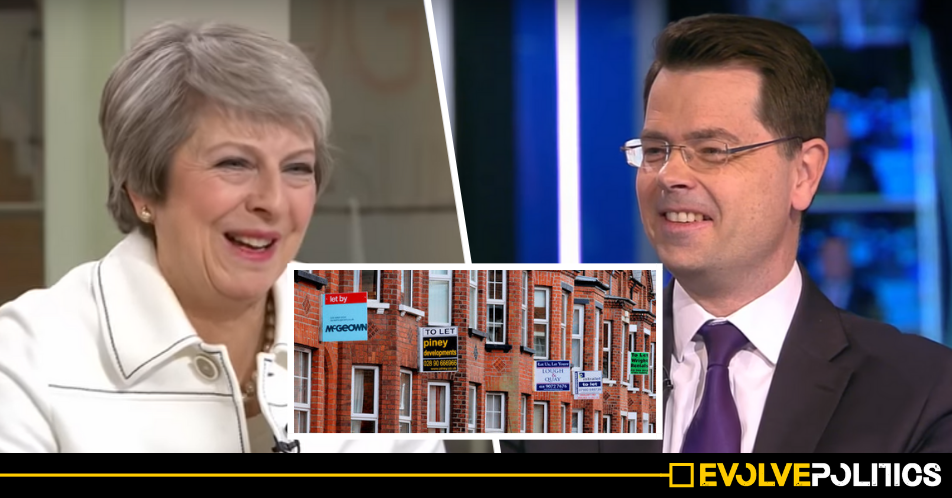 After two years of delays and obfuscation, the government’s ostensibly generous Tenant Fees Bill has finally gained Royal assent, meaning that from June 1st 2019, Estate Agents and landlords will no longer be able to charge any fees whatsoever – other than rent, deposits and tenancy renewal fees – to people wishing to rent a residential property.

At first glance, the new law looks likely a timely change of heart from the Tories, whose entire history shows a consistent theme of enacting laws that protect the wealth and power of landlords and property moguls over and above the rights of tenants.

Following the law gaining final approval on Tuesday, the government’s Communities Secretary, James Brokenshire, proudly boasted that the act would ‘help renters keep more of their hard-earned cash’ by banning estate agents and landlords from charging tenants fees for administration, referencing and credit checks, as well as capping rental deposits at a maximum of five-weeks’ rent, stating:

“Tenants across the country should not be stung by unexpected costs from agents or landlords.

“This Act not only delivers on our promise to ban letting fees but also caps deposits at 5 weeks’ rent and sets out how and when landlords can charge tenants fees – helping renters keep more of their hard-earned cash.

This is part of our ongoing action to make renting fairer and more transparent and make a housing market that works for everyone.”

The Tenant Fees Act also caps contract renewal fees at £50 “unless the landlord demonstrates that greater costs were incurred“, and gives the Trading Standards authority powers to ensure tenants can recover any fees they have been unlawfully charged.

The government states that the intention of their new law “is part of a wider package of government reforms aimed at rebalancing the relationship between tenants and landlords to deliver a fairer, better quality and more affordable private rental market.“

Communities Secretary @jbrokenshire spells out what the new Tenant Fees Act means and how it will save renters money pic.twitter.com/xPPa3qXIh8

So what’s the catch?

When the law comes into effect on June 1st this year, all estate agents and landlords in the country will face the same problem:  their incomes will be equally hit by the ban.

With the housing market still in crisis, and demand for affordable rented properties still far outweighing supply, the major effect of the Tories’ tenant fee ban will be to force estate agents and landlords to simply raise rents and other forms of income in order to maintain their profit margins – an expense which, contrary to the Tories’ claims about their new law, will inevitably end up falling on the shoulders of renters, leaving them absolutely no better off.

The Tories’ have history for introducing laws that, at first glance, appear to be uncharacteristically egalitarian, but which contain loopholes that easily allow the wealthy to maintain their power over the little guy.

In November 2017, the Chancellor Philip Hammond announced that the government would be abolishing Stamp Duty for people buying houses costing under £300k (and under £500k in London) – a law that, on first sight, looked like a gem for first time buyers.

However, following the announcement, it was revealed that the government had pushed through the change despite advice from the Office for Budget Responsibility which categorically stated that abolishing Stamp Duty on such properties would simply “feed one-to-one into house prices” and that “the main gainers from the policy are people who already own property“.

In effect, what the Tories’ abolition of Stamp Duty did was allow sellers to simply raise their prices to account for the extra money buyers had available from the Stamp Duty abolition.

With the government steadfastly refusing to build anywhere near the necessary amount of social housing to meet demand, added to the fact that property developers are obdurately refusing to increase the supply of affordable housing as it might hit their profit margins, the Tories’ Tenant Fees Act will almost certainly do absolutely nothing to help private renters, and could in fact end up hurting them further.

If the government truly wanted to make the housing market fairer for the little guy then they would start by building enough houses – this would gradually result in the reduction of rents and house prices by increasing the housing stock available for both renters and buyers.

However, the Tories have absolutely no plans to truly help those on the bottom rung of the ladder, because their priority is, and always has been, pandering to the rich and powerful who prop up their party in massive six-figure donations, and the tax-avoiding billionaires who regularly churn out pro-Tory propaganda in the massively over-represented UK right-wing media.