A recent report from leading academics at the University of Oxford disturbingly illustrates how the government is using social media platforms such as Facebook, Twitter, and YouTube, to “influence” public opinion.

The report details evidence that the government are using social media as a tool of “social control” – deploying the British Army as “cyber troops” to run “psychological operations” (psyops — also known as psychological warfare) against the general public.

The report authored by The Computational Propaganda Project at the Oxford Internet Institute shows the widespread use of cyber troops to spread online propaganda across the world, in 28 countries — both “democratic” such as ours and authoritarian like North Korea and China.

The study notes (sadly, unsurprisingly) that:

Authoritarian regimes are not the only or even the best at organized social media manipulation.

Governments across the world target both their own populations on social media and foreign countries in this propaganda war. 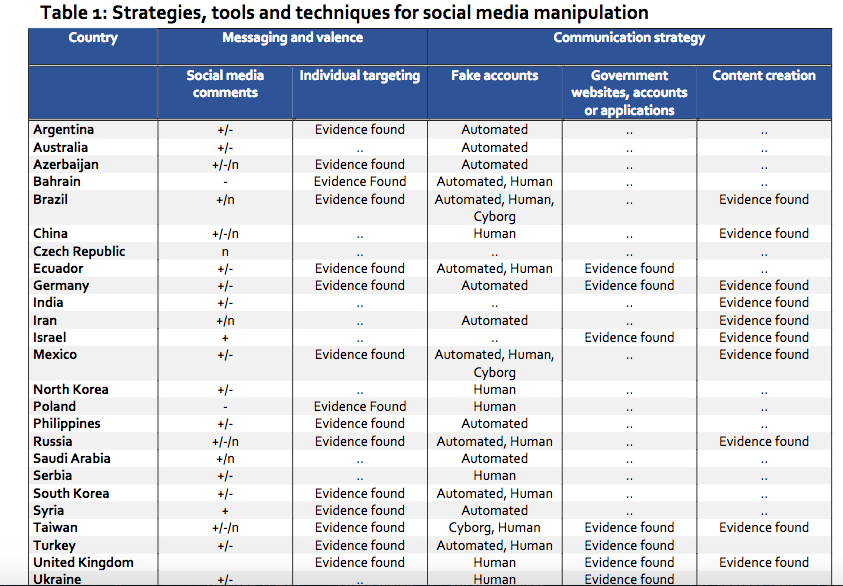 The report shows that the government uses the British Army to run:

The British government set up a unit called the 77th Brigade in 2015 — saying that the purpose of it:

is to shape public behavior through the use of “dynamic narratives” to combat the political propaganda disseminated by terrorist organizations.

77th Brigade is a newly formed British Army Brigade formed from specialist across the regular and Army Reserve. The HQ is located in Hermitage, Berkshire.

Here is one of their recent posts. 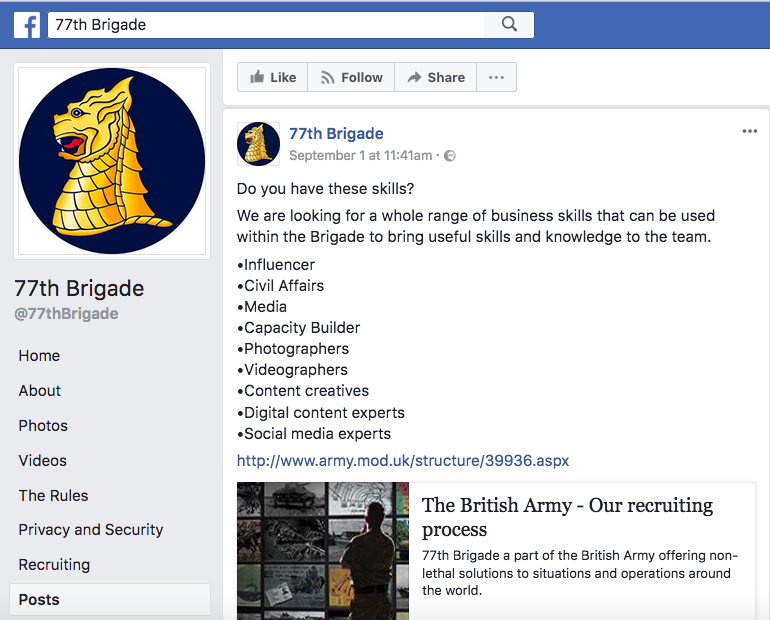 As you can see they are currently recruiting for a range of interesting positions: influencers, content creatives, digital content experts and those who describe themselves as social media experts.

Another post gives us an even greater insight into what could well be the real purpose of the 77th Brigade — it has little to do with fighting terrorist propaganda:

The Army requires somebody to make “MEMES” or “cartoons and humor” on a full-time basis — a bit strange, isn’t it?

Must be all where all those rib-tickling, laugh a second, anti-ISIS memes floating around the web come from, I guess…

The report shows the wide range of techniques employed by the cyber troops, ranging from “commenting on social media posts” in order to distract, or influence from a certain anti-government narrative to creating fake accounts and using “bots” to spread what appears to be grassroots political activism and “fake news”.

All with the intention of promoting government-Tory narratives, lies, misinformation and propaganda.

The report found that this extends beyond social media and into direct content creation, noting that:

Some cyber troop teams create substantive content to spread political messages. This content creation amounts to more than just a comment on a blog or social media feed, but instead includes the creation of content such as blog posts, YouTube videos, fake news stories, pictures or memes that help promote the government’s political agenda.

Which is interesting, isn’t it? It gets even more disturbing as the report continues:

In the United Kingdom, cyber troops have been known to create and upload YouTube videos that “contain persuasive messages” under online aliases (Benedictus, 2016).”

Some of these“psychological operations”, or psyops, have been framed as“anti‐radicalization” campaigns designed to deter British Muslims from going to Syria (Williams, 2015)

The report, however, doesn’t mention that fact that ISIS Twitter accounts were traced back to government departments in Whitehall by a hacking group in 2015.

The government responded by claiming that they had sold the IP address to a Saudi company and thus were not responsible for the Tweets – a funny way of combating terrorist propaganda, isn’t it?

The report also shows the range of cyber troops involved in this mass propaganda psyops project, including government based cyber troops, noting that their use extends beyond the 77th brigade:

In the United Kingdom, cyber troops can be found across a variety of government ministries and functions, including the military (77th Brigade) and electronic communications (GCHQ) (Greenwald, 2014c; MacAskill, 2015).

The report says that cyber troops are also used by politicians and parties:

Social media is used by political parties to manipulate the public, using fake accounts to artificially inflate the number of followers, likes, shares or retweets a candidate receives, creating a false sense of popularity.

Other techniques include paying private contractors to carry out social media propaganda campaigns, volunteers and paying citizens, the report says:

Some cyber troops are citizens are actively recruited by the government and are paid or remunerated in some way for their work.

The report notes that these groups are highly organised and that the British government is employing at least 1,500 people to act as cyber troops

The cost to the taxpayer of running these programs was unknown to the researchers, but we imagine such operations are not exactly cheap to run.

Given all of this research and information, we can only assume that much of the political discussion online, on social media will be subject to these cyber troops and their psyop tactics.

Around the time of the last general election, both Evolve and my personal site Enemy In A State were targeted on a daily basis by countless trolls spreading lies about Jeremy Corbyn and Labour, spouting endless Tory propaganda. The trolls would appear on both pages within seconds of posting, and we sincerely doubt we were the only pages to have dealt with this kind of organised trolling.

A quick dive into one of  the biggest political “discussion” groups on Facebook, The Heart of British Politics, almost always leads to some sort of bare-faced trolling or racism, or extreme xenophobia, lies, or a racist meme war.

Posts such as this are very much the order of the day:

One has to wonder whether there is more than just an army of dedicated right-wing trolls on the internet, whether that army is in fact so organised and dedicated because they are in fact paid-up members of the British Army.

The facts are now categorically clear – social media is used by this Tory Government to spread propaganda in a number of ways that the public at large is completely unaware of – trolling people online, simply to control the narrative and the population.

Not only is such practice immoral, it completely undermines democracy and free speech itself. Of course, this is a totally predictable reaction from the establishment to freedom of any kind.

The internet can act as social space where people connect, discuss, share, organise, and debate in ways they couldn’t just 15 years ago – and this public unity is seen as hugely dangerous by authoritarian governments across the globe. So much so that Donald Trump has literally just suggested that we should switch the internet off.

It was the British state who essentially created the modern propaganda system as we know it, including the extenisive use of psychological warfare, and whose World War I (WWI) propaganda is known to have inspired the Nazi minister for propaganda Joseph Goebells, with Hitler himself declaring that the Germans lost WW1 because of ineffective propaganda.

Writing about WW1, in Mein Kampf, Hitler says his experiences with the allied forces:

spurred me to take up the question of propaganda even more deeply than before… What we failed to do, the enemy did with amazing skill and really brilliant calculation. I myself learned enormously from this enemy war propaganda

Hitler concluded his thoughts on the matter by saying that allied propaganda was “a weapon of the first order”.

Hitler and the Nazis may have lost the war, but the British state have ensured that the propaganda system he so admired continues to live on even in the modern age of social media.