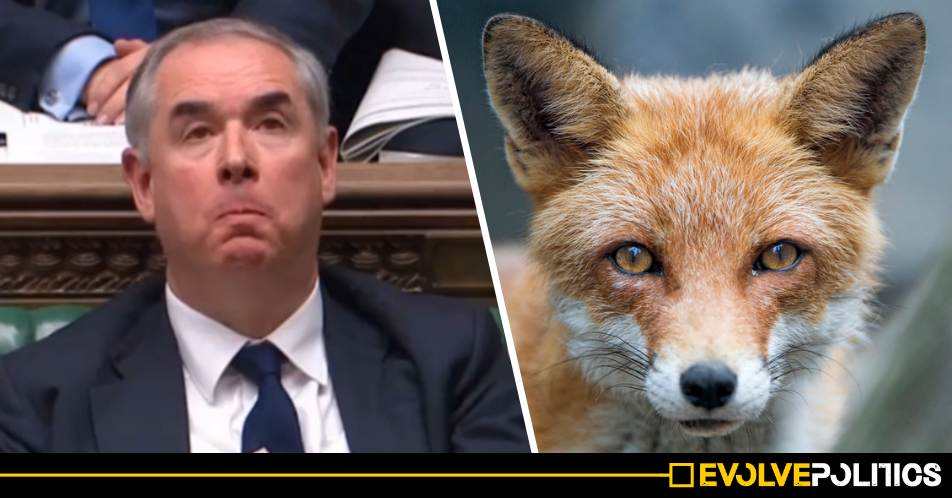 The government’s Chief legal advisor, the Attorney General and MP for Torridge and West Devon, Geoffrey Cox, has been accused of hosting an illegal fox hunt near his Devon constituency.

On Saturday, Huntsman met near Tavistock for the Lamerton Hunt, on land said to be owned by the Tory Attorney General.

The government’s Chief Legal Advisor was pictured by Devon County Hunt Saboteurs allegedly hosting members of the hunt outside his house, before they left on horseback in the surrounding fields.

Hunt Saboteurs present at the scene allege that “four foxes were spotted in the first half hour of the day, fleeing ahead of the hounds“, and that the foxes may have been “brought in to give hunt followers a good show” – a scenario which, if true, would constitute a clear breach of the 2004 Hunting Act which outlaws hunting wild animals with dogs.

The 2004 Act also makes it illegal to knowingly permit land belonging to you to be entered or used in the course of an illegal hunting act.

Following revelations of the potentially illegal hunt emerging, one commenter on the Devon County Hunt Saboteurs Facebook page accused the Attorney General of “aiding and abetting criminal activity“, whilst another said:

“Surely this is a conflict of interest. He is hosting an illegal activity on his land therefore should be questioned by the police?”

A video of the event, also posted by Devon County Hunt Saboteurs, shows one member of the hunt attempting to quash accusations of illegal activity by declaring that that they “haven’t illegally hunted for three seasons“, before another tells the Hunt Saboteurs to “f*ck off“:

It is absolutely shameful that @Geoffrey_Cox decided to host the Lamerton Hunt yesterday, who were blatantly hunting foxes. Luckily @devoncountysabs were on hand to make sure none were killedhttps://t.co/nz4zQzHTNp

Speaking on the issue of potentially illegal fox hunts over the festive period, Labour MP Chris Williamson wrote on Twitter:

“This routine disregard for the law by bloodsports fanatics must be addressed by the Police and politicians. Trail hunting is used as an alibi to ignore the Hunting Act.

Sadly, the Attorney General thought it acceptable to host a hunt over the festive period”

This routine disregard for the law by bloodsports fanatics must be addressed by the Police and politicians. Trail hunting is used as an alibi to ignore the Hunting Act.
Sadly, the Attorney General thought it acceptable to host a hunt over the festive period https://t.co/MP9h0P2Xlc

Whilst the Prime Minister Theresa May and a large proportion of Tory MPs are avid supporters of fox hunting, Labour have recently announced that if they are elected to government they would strengthen the Hunting act to include a ‘recklessness’ clause that would stop Huntsman from using trail hunts as a cover for illegal fox hunting.

Labour have also announced that they would impose prison sentences for those found guilty of taking part in illegal hunts.

“Labour’s 2004 Hunting Act was a key milestone in banning this cruel blood sport, but since then new practices have developed to exploit loopholes in the legislation.”

“While Theresa May proposed scrapping the Hunting Act altogether, Labour is today calling time on those who defy the law by announcing several measures that would clamp down on illegal hunting.”

“Labour is the true party of animal welfare. These new proposals form part of the next chapter in striving to ensure our laws and regulations on animal welfare are up to date and fit for purpose.”

Geoffrey Cox has since responded to the allegations, claiming to Evolve that:

“There is no discernible allegation whatsoever in either of the reports to which you have referred, let alone evidence, that the Hunt engaged in any activity that could have been remotely considered to be illegal. It would be completely false based on the reports you have cited to make any such allegation.

Any attempt to link Mr Cox to illegal hunting activity would be irresponsible and wholly false.”

Evolve Politics have since asked Mr Cox for a further response on the clear allegations of potentially illegal activity – specifically the allegations that foxes were “brought in” to the area for dogs to hunt, and that the Lamerton Hunt was “blatantly hunting foxes” – put forward by both Devon County Hunt Saboteurs and the official Hunt Saboteurs Association Twitter account, respectively.