Home UK News Conservative Party News The Tories could soon be handing £millions of YOUR money to The... 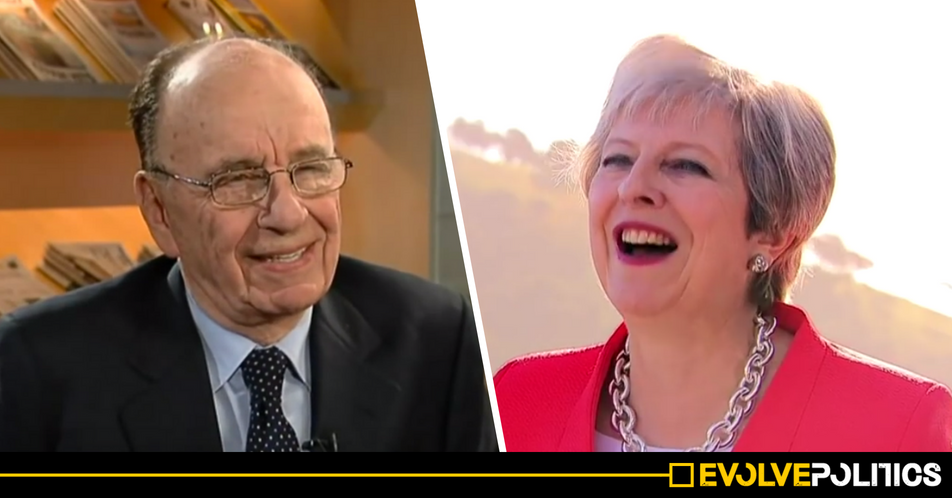 A government-led consultation is currently underway that could soon see millions of pounds of British public money handed over to the billionaire media barons in charge of some of the country’s most controversial newspapers, such as Rupert Murdoch of The Sun, and Lord Rothermere of The Daily Mail.

The little-publicised public consultation, titled The Cairncross Review, was launched by the Tory government on June 28th 2018 with the aim of obtaining evidence and ideas that might help “sustain the production and distribution of high-quality journalism in a changing market.”

Among other factors – such as looking at the “overall state of the news media market” and the “role and impact of digital search engines and social media platforms” – the Cairncross Review will also be placing a focus on “Threats to [the] financial sustainability” of the British media.

The Cairncross review is being led by the former Senior Editor of The Economist, Dame Frances Cairncross, and among the names appointed to the Consultation panel include a certain Peter Wright, the current Editor Emeritus of Associated Newspapers, the organisation who publish The Daily Mail, the Mail on Sunday, MailOnline and the Metro.

With a Consultation Panel absolutely jam-packed with representatives of the British corporate media – and precisely nobody representing the wide array of truly independent media outlets throughout the country – it is patently obvious that the main beneficiaries of the process with be the mainstream press.

According to Byline Media, the outcome of the process will almost certainly involve a proposal to hand public money to the likes of Rupert Murdoch and Lord Rothermere (Jonathan Harmsworth):

“There are two possible sources of money: some kind of tax on (or contribution from) the big tech companies, or another raid on the BBC licence fee pot. Either way, the idea that any public money earmarked to support high-quality journalism might find its way into the pockets of Lord Rothermere, Rupert Murdoch and the publishers of the Mirror and Express is too repulsive to contemplate.”

And according to Brian Cathcart from the International Forum for Responsible Media (Inforrm), the consultation is “little more than a device to help [the former Culture Secretary Matt Hancock] justify giving fresh public subsidies to his friends and supporters in the corporate press.”

Cathcart also goes on to write:

“The terms of reference of the review are pretty clear. There are various tasks it should perform as it goes along, most of which involve scrutiny of Google and Facebook, but it has one real objective: to ‘make recommendations for industry and/or government action to ensure a future for high-quality journalism’.

Hancock plainly expects it to propose ways of milking tech giants for money. Now it’s possible that that it will simply suggest a better online advertising deal for news providers, but it is hard to see why we need a year-long review for that. Everyone already knows such a deal is desirable and if there is anything Hancock or the industry can do to make it happen they should surely be doing it now rather than sitting on their hands for a year.

Far more likely is that he wants the review to propose some kind of tax and to help him sell the idea to the public and in Parliament by providing a winning rationale in the form of dire warnings about the plight of ‘high-quality journalism’.

So let’s be clear: any money raised as tax is public money – our money – and the idea that this might find its way into the pockets of Rupert Murdoch, Lord Rothermere, the Barclay brothers or the people who run the Mirror and Express is unacceptable.”

Lord Rothermere’s publication, The Daily Mail, is loathed by many across Britain for peddling divisive journalism that intentionally targets minorities and stirs up racial hatred.

The Daily Mail has a long and infamous of supporting tyrants, including openly supporting Adolf Hitler – who was a personal friend to the first Lord Rothermere – throughout the 1930s.

Furthermore, with plans afoot to hand public money to publications such as the Daily Mail, it is well worth noting the fact that such publications, and their owners, aren’t exactly fond of paying into the public pot themselves.

As Private Eye has previously reported:

“For a man whose newspapers love Britain so much, the 4th Viscount Rothermere is remarkably enamoured of the world’s tax havens as shelters for his enormous riches.

Since 1995, three years before the Hon Jonathan Harmsworth (as he then was) inherited the Daily Mail & General Trust plc empire from his father, the 3rd Viscount, the group has been controlled through a company, Rothermere Continuation Ltd, registered in Bermuda but run from Jersey (one offshore specialist told the Eye that companies registered in Britain’s Caribbean overseas territories have the advantage of being “very portable”).”

In addition to The Daily Mail’s disgusting history, the British public also hold a similar hatred towards the likes of Rupert Murdoch and The Sun.

The Sun newspaper is now almost entirely banned throughout Merseyside after falsely blaming the Hillsborough disaster on Liverpool fans and wrongly accusing them pickpocketing victims and urinating on police officers.

If you don’t want our money being handed to the likes of Rupert Murdoch and Lord Rothermere, you can still submit your views to the consultation which is taking written evidence from members of the public until 11:45pm on 14 September 2018.

To submit your views, you can email [email protected], or you can complete the questionnaires on the official government consultation documents by following this link.