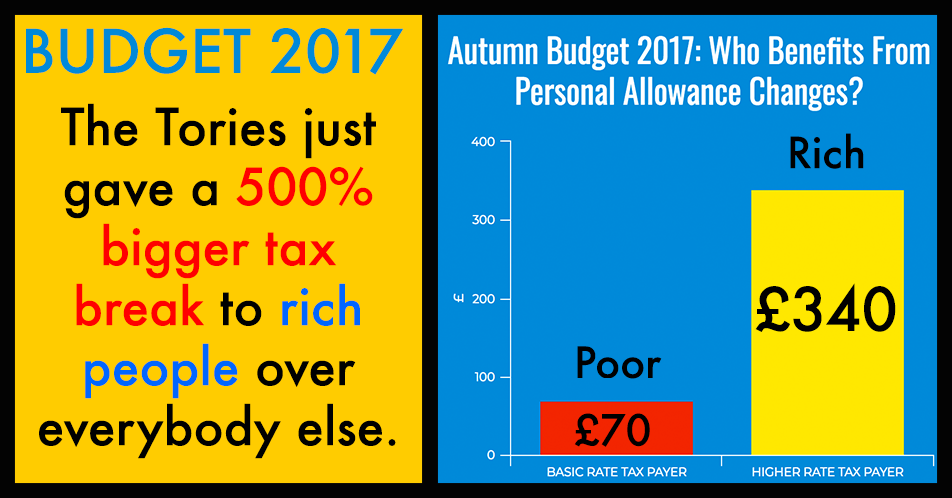 The Tories are at it again – handing money that we apparently don’t have to themselves and their wealthy friends.

In a singularly unimpressive budget, it really is little surprise that “Spreadsheet Phil” has slipped in far more goodies for the rich than for you or me.

Whilst changes in the income tax threshold may seem great at first, our analysis reveals they benefit the wealthy far more than anybody else.

This year’s change means that all workers will be £70 better off as the income tax threshold rises.

However, as always with Tory announcements, the devil is in the details.

If you are earning over £46,350 a year (including Philip Hammond himself) then you’ll receive nearly 5 times as much (400% more) as low and middle income earners.

This is because when the basic income tax threshold rises, the 40% tax rate threshold also rises. This has been the case for years with this clever Tory accounting trick.

The Personal Tax allowance changes are a very easy way for the Tories to make it look like they’re helping everyone – but, as always, they’re giving away far more to the rich than anyone else.

The Tories (and their Lib-Dem accomplices during the coalition) have always billed this policy as lifting the very poorest out of income tax. Whilst this is technically true, it’s also fair to ask whether it’s appropriate that the majority of the gains should go to the wealthy.

The Guardian have provided their own analysis of the budget. In their case they break it down by the demographics it will effect. And, in their workings, it is still true that the vast majority of the gains go to the wealthy.

Combining the various effects any household earning under £30,000 seems to gain around £100 from the change. Households earning over £50,000 meanwhile gain around £300. This is consistent with Evolve’s analysis.

It’s worth noting however that the biggest winners in the Guardian’s analysis are, of course, the very wealthy. With an unmarried couple with a combined income of £95,000 gaining over £600!

None of these calculations, including my own, account for inflation which will see a number of the groups worse off overall. At 1.2% many will be feeling the pinch, but unemployed people and the disabled will be feeling it particularly harshly – they have seen absolutely no gain at all in this budget.