The Conservatives have been well and truly caught out on social media again after hilariously attempting to blame Labour for a crisis that happened entirely under a Tory government.

To make matters even worse for Theresa May, the Tories’ fabled social media team are gallantly refusing to delete their latest post despite the fact that it is provably false.

The Tories’ Facebook post has already been completely ridiculed on social media, with some pointing to the fact that you literally only have to Google their claims to discover that they’re complete and utter baloney.

Rather than attempting to challenge Labour on modern day policies, the Tory Facebook team have once again harped back to the past in a dire attempt to smear socialist policies.

This time the Tories have chosen the year 1973 and the great oil crisis. Those of you who are old enough to remember will probably know where this story is headed.

What socialism looks like: cars queue up for petrol in 1973 as lorry drivers strike. This means that petrol is not being transported to petrol stations and people are left without fuel. With unchecked unions, the economy flounders.

Accompanied by this picture:

However, for those of you too young to remember, or if you simply haven’t cottoned on yet, there is one substantial problem to the Tories’ claims.

That’s right. In 1973, the Conservatives were in government.

Not only that – the Conservative government led by Edward Heath had actually been in charge of the country for over three entire years when this crisis erupted.

So, according to the Tories’ esteemed social media team, Ted Heath’s government were too socialist.

Either this or they literally can’t be bothered to use Google. 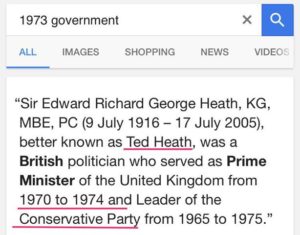 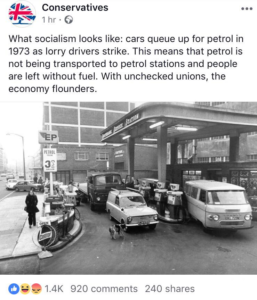 Not only did the oil crisis that led to these scenes begin after 3 years of the Tories being in government, the crisis was a direct consequence of Tory policy:

In 1973 the Organization of Arab Petroleum Exporting Countries declared an oil embargo upon nations who were actively supporting Israel in the Yom Kippur war. The United Kingdom was one of the first countries to suffer the consequences of the embargo due to their defiant and unwavering allegiance to the Zionist state.

The war was fought by a coalition of Arab states, led by Egypt and Syria – supported by the Soviet Union – against Israel and their Western Allies including the United States, Canada and the United Kingdom.

Due to the oil embargo on supporters of the Israeli war efforts, the price of oil quadrupled in just 6 months from $3 a barrel to $12 a barrel causing an economic shock that ultimately led to a stock market crash, soaring inflation and mass unemployment.

With wages no longer able to put food on the table due to soaring inflation, unions put in claims for higher wages – claims which were swiftly denied by the Tory government – leading to strikes, and ultimately resulted in the fall of Ted Heath’s government.

Following the oil crisis, nations such as Japan first chose to disassociate themselves with US foreign policy in an attempt to avoid being subject to the boycott. The oil crisis was also a major factor in Japan’s decision to completely remodel their economy away from such a heavy reliance on oil – choosing to focus on developing and exporting electronics and cars.

Had the United Kingdom seen sense and chosen a similar, less oil dependent economic path as Japan, we would now be free to choose our own path rather than having to kowtow to US foreign policy in the Middle East – a la Iraq, Libya, Syria.

So, as you can see, queues at petrol stations were far from the only problem in 1973 – and they certainly weren’t caused by socialism.

People can see that socialist policies really do hold the answers to a lot of our problems – nationalised healthcare has been hugely popular since its inception in 1945, and the majority of the general public also favour renationalising a whole host of industries which have been run down via privatisation by successive neoliberal governments.

The Tories want you to think the world is black and white and that socialism is simply ‘evil’ – but what’s really beginning to worry the Conservatives is that people simply aren’t falling for the ancient ‘Reds under the bed’ scares any more.