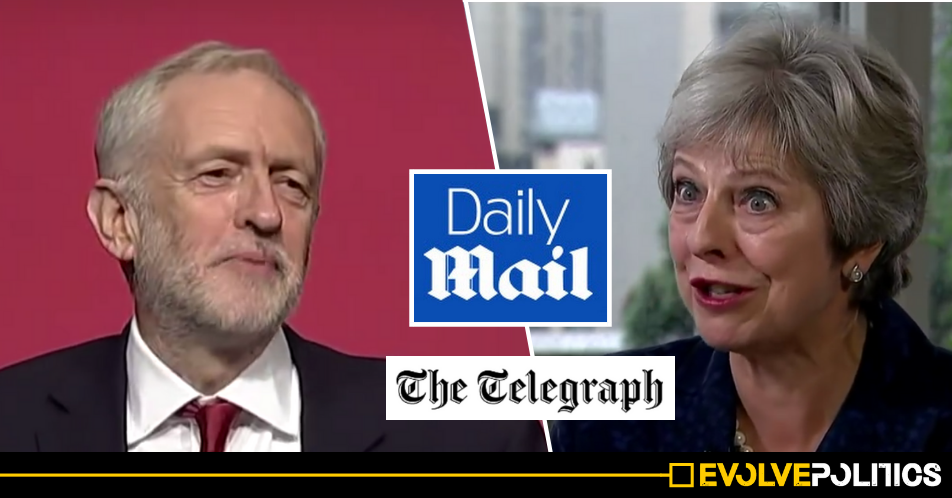 Since Labour’s hugely successful Conference in 2017, the billionaire-owned right-wing media have spent a huge amount of effort attacking the character and integrity of Jeremy Corbyn. In just the last year alone, they have attempted to label the Labour leader as – amongst many other things – a Czech Spy, a Kremlin stooge, a racist, an antisemite, a terrorist sympathiser, and an IRA lover.

Aside from their obvious and hysterical hatred towards the Labour leader, this year-long barrage of increasingly ridiculous personal attacks has clearly shown that the right-wing media are doing everything they can to paint Jeremy Corbyn in a negative light, whilst simultaneously attempting to keep their readers in the dark as to what he actually stands for.

This theory was proved correct during the run-up to the snap 2017 General Election, where, in a matter of just six weeks, the Labour Party managed to make huge gains on the Tories – gains which can be attributed in large part to laws which forced publicly-owned media outlets such as the BBC and Channel Four to give proportional and accurate coverage to political parties and their policies during election periods.

Indeed, after Labour’s hugely popular 2017 manifesto was leaked a few days early, their poll numbers began to soar – going from a lowly 24 points at the very start of the election period, to finishing the campaign having secured an astonishing 40% of the vote, as well as recording the biggest vote swing towards the party since 1945.

However, the media do seem to have learnt their lesson from the 2017 election. They are now well aware that Labour’s policies – such as scrapping tuition fees, reversing privatisation, and ditching austerity in favour of public service investment – are hugely popular with the general public.

In contrast to their initial reporting on the Labour leader following his election to lead the party in 2015 – reportage which regularly focused on attacking his supposedly outdated policies – the past year of media attacks against Corbyn have, almost without exception, completely ignored Labour’s policies.

But now, following a huge swathe of new policy-announcements at their 2018 Conference in Liverpool, the media have been forced to face reality once again – and judging by the hysterical reaction from both The Telegraph and The Daily Mail, the billionaire media barons are now fully aware that the Labour leader is now just inches from power.

“Middle England is falling for Corbynomics”

In an article attempting to criticise Labour’s latest policy announcements, The Daily Telegraph ran with a headline which stated:

“The terrifying truth is that Middle England is falling for Corbynomics”

Telegraph writer Allister Heath – who appears to have completely forgotten about the 2017 General Election – begins his article by exclaiming:  “I have some bad news for you, my dear readers. Corbynomics is actually popular”.

Heath then implies that the electorate may have “caught Marxism“, and also labels Labour’s latest policy to give workers a 10% stake in the companies they work for as “idiotic“, before going on to completely contradict himself by hypocritically warning that:

Then, in an attempt to counter the popularity of Corbyn’s policies, Heath then goes on to argue that, rather than actually focus on devising new policies that the public like, the Tories should simply change the language they use, stating:

“As a starting point, the Tories must discover a new language.

Sadly, the public doesn’t respond to notions such as “competition is good”. It is associated with losing, stress, zero sum games and a fight for resources. Instead, the Tories should talk about “power” and “control”, and personalise the idea of the nationalised monopolies Corbyn is advocating.”

In addition to changing their language, Heath then offers up a few new policy ideas which, he predicts, would capture the imagination of the public and boost the Tories’ popularity.

Heath’s first policy proposal (we sh*t you not) is this *absolute game-changer*:

“a five-year plan to make hosepipe bans a thing of the past, with pipelines from Scotland and desalination plants in the South”

And then, despite him literally referencing a recent survey which shows that the vast majority of the public now want the government to raise taxes in order to fund investment in public services, Heath then argues that the Tories should ignore public opinion and propose an “across-the-board cut in income tax“. Yes. Seriously:

Don’t ever say The Daily Telegraph and its writers don’t have their finger firmly on the national pulse.

If you thought The Telegraph’s rampant anti-Corbyn hysteria was bad, just wait until you see the Daily Mail’s reaction.

Having clearly not read Heath’s advice to not simply “shout Communist” in an attempt to win the argument, the Mail’s Quentin Letts begins his latest anti-Corbyn attack piece in typically ridiculous fashion by screeching:

“This has been the week that Labour went full Commie tonto. Some of the policies proposed at the party conference in Liverpool belonged to Castro’s Cuba, an island reduced to penury by rigid Left-wing dogma.”

However, after several paragraphs of simply attacking Labour’s latest policies with various versions of the same tired old “Commie” tropes, Letts appears to have some kind of political epiphany, stating:

“Having sat through the week’s debates, I sense the Corbyn movement may, howsoever dottily, be on to something.”

Before going on to exclaim:

“Which party has zip in its tank? Whose activists look more representative of society? What sort of accents do they have? What are our grandchildren saying?

On all these fronts, Corbyn’s Liverpool gathering may have scored highly. The Tories — led by cautious, sober Mrs May — need somehow to match that.

[…] For every Tosh who snarled, another delegate spoke with excitement. These delegates were chosen pretty much at random. They were not frontbench Establishment bores, or sycophants approved by the party hierarchy, as happened in the Blair years and still happens at Tory conferences.

The Liverpool conference was refreshingly democratised, and when they spoke about grotty trains, stupid planning laws or City fat-cats, they may —despite McDonnell’s mad Marxism — have had many in Middle Britain nodding in recognition of things that could be done better by the State.

Some were the sort of people you might easily have found interested in David Cameron’s Tory party: a pukka young Derbyshire woman called Samantha, a parliamentary candidate called Hugo and a retired social worker from Wolverhampton in a smart yellow top. The last announced she had not prepared a script, for she had never expected to be given a chance to speak.

Instead of the usual spiel of slogans, she described extempore how she had found a down-and-out at the door of her supermarket and taken the lad off for a cup of coffee to try to understand his problems.“

Letts then goes on to praise how, after “wrench[ing] control of the party from the Blairite elite“, Corbyn has “rejuvenated Labour“, citing numerous delegates who “felt comfortable enough to criticise Labour parliamentarians“, and thus change the party for the better.

Having seemingly realised that listening to the views of ordinary people – and not just those in the Westminster bubble – might actually be a good idea, Letts’ bizarre epiphany then morphs into a full-on assault on the Conservative Party’s continued unflinching support for the greed-is-good doctrine of free-market neoliberalism, stating:

“[Labour] grasp that, for all the received wisdom about the Centre no longer being important, elections are still decided by swing-voters. And swing-voters don’t mince their words about the City slickers who have so long ripped us off with Public Finance Initiative contracts or their Carillion-style behaviour on pension funds.

Or take enormous pay-offs and abuse gilded networks which allow newly retired civil servants and politicians to walk into juicy private sector jobs (the example set by former Chancellor George Osborne, who has umpteen jobs and multiple conflicts of interest). It is simply grotesque. Sorry, there is no other word for it.

In the mid-Nineties, John Major’s stale Tories assumed ‘Bambi’ Blair was unelectable. They lost the next election in a landslide. Similarly, before the 2015 General Election, Labour MPs in Scotland thought they had jobs for life. Their complacency saw all but one of them booted out of office.”

However, unlike The Telegraph’s hilariously feeble attempt to propose policies which might reinvigorate the Conservative Party, Letts doesn’t even bother trying to come up with any, instead arguing that they should simply start “speaking of liberty, of tax-cutting, of proper defence spending, of cutting the foreign aid budget by two-thirds, and of getting us cleanly out of the EU, no strings and caveats.”

Letts finishes his diatribe by simply warning that “The Tories need to wake up” in order to avoid a Corbyn government.

I recently had it argued to me that it wasn’t policies which decided elections, but the personality and integrity of party leaders.

Despite both of these factors clearly being hugely important in elections, it’s also clear that the Labour Party are streets ahead of the Tories in both departments.

If the Tories are to stand any hope of keeping Corbyn out of Number 10, not only do they need to get rid of Theresa May immediately and install somebody with an actual vision, they also need to start actually listening to the views of the general public in order to devise some new, popular policies.

However, with the Corbyn project now three years in and being described by many quarters as a government in waiting, it seems that even the Tories’ loyal lackeys in the mainstream media are beginning to realise that, unless they make sweeping internal changes quickly, the Conservative Party are on a slippery slope to electoral oblivion.