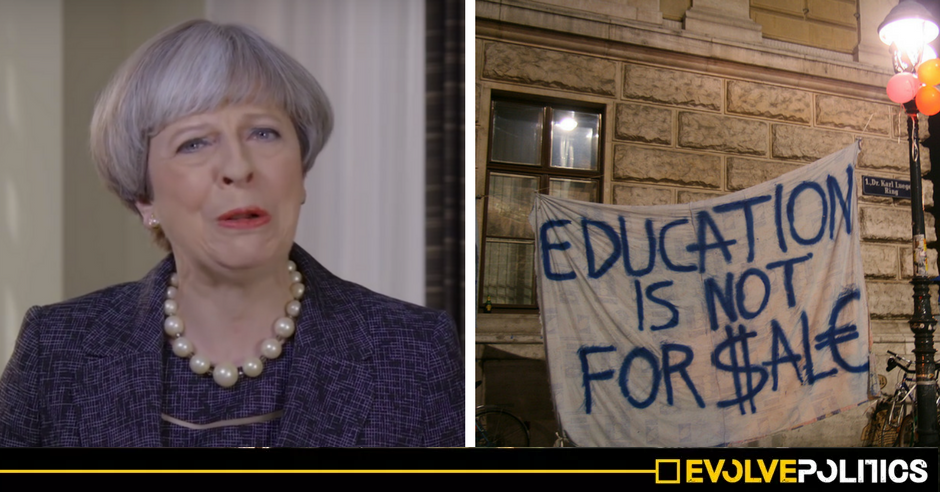 Theresa May will admit that the Tories’ policy on tuition fees has failed miserably in a speech this afternoon announcing the launch of a year-long review of the government’s higher education policy.

After tuition fees were increased to £9,000 by the Cameron government in the face of mass opposition by students, the Tories have been forced into an embarrassing climb-down after tuition fees became one of the defining issues of the 2017 General Election.

In this speech this afternoon, May will say:

“All but a handful of universities charge the maximum possible fees for undergraduate courses.

“Three-year courses remain the norm and the level of fees charged do not relate to the cost or quality of the course.

“We now have one of the most expensive systems of university tuition in the world.”

Despite being a scenario predicted by much of the sector, university staff and students alike, Theresa May and the Tories have continued to support the marketisation of our education system, and it’s still questionable whether this review will change education policy for the better.

A more likely scenario is that this year-long review will simply just suggest an incremental reform in order to try and placate enough of the student population for it to be electorally beneficial in 2022.

One suggestion floated by Education Secretary Damian Hinds was to cut the price of arts degrees, meaning that STEM subjects such as science and maths degrees would cost significantly more than other courses.

However, Shadow Education Secretary Angela Rayner laughed off the idea and claimed it would make the Tories’ tuition fee debacle even more chaotic than before. She told The Mirror that:

“Making fees different levels is actually going to cause more chaos in the sector.”

“We’re told we need science and maths. To make those degrees more expensive flies in the face of what our economy needs in the future.”

One thing is certain: Labour’s massively popular education policy of free tuition fees had a huge part to play in last year’s General Election result. Consequently, in order to cling onto power, May and the Tories are slowly beginning to cede ground to the political arguments made by Corbyn, who is now setting the government’s agenda more forcefully than any of their own Cabinet.

Not only this, but it illustrates that when engaged, the young and the student population are ready to become a formidable electoral force in the future.