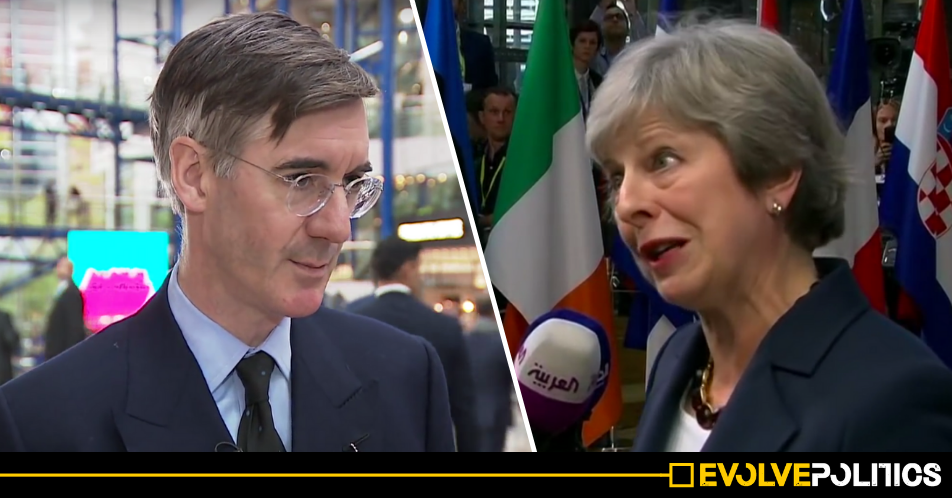 B rexit supporting Tory MPs have just issued their starkest warning to date against the Prime Minister Theresa May after she reportedly signalled that she is willing to bow to EU pressure and extend the Brexit transition period – a decision which would effectively keep the UK inside the EU for an extra year until 2022.

Prominent Brexit-backing Tories are reported to have warned May that she now has just “days left as PM” after what they see as a ‘completely unacceptable’ capitulation from Theresa May.

The Telegraph’s Chief Political Editor, Christopher Hope, reports that the change is mood around the party after Theresa May’s reported compromise is a highly significant moment in her premiership, tweeting:

“This morning feels like a moment in Theresa May’s leadership. Effectively staying another year in the EU is completely unacceptable to the Brexiteer MPs I have spoken to. She appears to have run out of road in the Brexit talks and has days left as PM, they say.”

This morning feels like a moment in Theresa May's leadership. Effectively staying another year in the EU is completely unacceptable to the Brexiteer MPs I have spoken to. She appears to have run out of road in the Brexit talks and has days left as PM, they say.

Reports surfaced last night which indicated the Prime Minister had told EU leaders that she is now ready to consider extending the Brexit transition period to three years, until 2022.

Addressing EU leaders last night, Theresa May is reported to have discussed the plot to keep the UK inside the EU for an extra year.

Following the crunch meeting in Brussels, an EU official is also reported to have said that there were “no new proposals” on the Irish border, going on to confirm that Theresa May “would be ready to consider the extension of the transition period” in order to devise a solution.

Furthermore, a statement by the Irish PM, Leo Varadkar, suggested that the proposed extension was a large topic of conversation:

“I’ve always been of the view that it could easily take two years or more to negotiate a new EU-UK treaty covering everything from economy to trade to security.

That can easily take more than two years and would have to be ratified by 28 parliaments.

So there is merit in discussing the idea of a longer transition.”

“Mrs May’s acceptance of an extension to the transition period will take us to the next general election which may mean we never leave at all.”

And the prominent Tory Brexiteer, John Redwood, said that Theresa May’s reported compromise was “quite unacceptable“, and added that: “I don’t think people will vote for it.“

The move to extend the transition period would reportedly cost the UK an extra £9Bn in membership fees to the EU, and Brexit supporters argue that the reported compromise hints at Theresa May’s true intention to enforce her real desire of a soft Brexit.

The UK is set to formally leave the EU on March 29th 2019, with a transition period to implement any deal that is reached currently scheduled to run until December 2020.

But ardent Tory Brexiteers say that extending the transition period would only increase the chances of Britain remaining inside the Customs Union, or even the Single Market – things they regard as not really leaving the EU, or a ‘Brexit in Name Only’ (BRINO).

However, Theresa May has now reportedly signalled her willingness to extend the transition period after progress on a workable solution to the Northern Irish border issue ground to a halt.

But, after reports emerged detailing the reported compromise, Tory Brexiteers seem willing to push forward to trigger a no confidence vote in the Prime Minister.

Several Brexit-backing Tory MPs, including the MP for North West Leicestershire Andrew Bridgen, have already submitted letters of no confidence in the PM to Graham Brady, the head of the influential 1922 Committee.

However, 48 letters will be needed to trigger a vote against the Prime Minister.

And now, with the stakes unquestionably at the highest point since the referendum, and with Theresa May’s authority over her own party crumbling by the second, her days as Prime Minister look to be increasingly numbered.

It really is now a matter of when, not if.