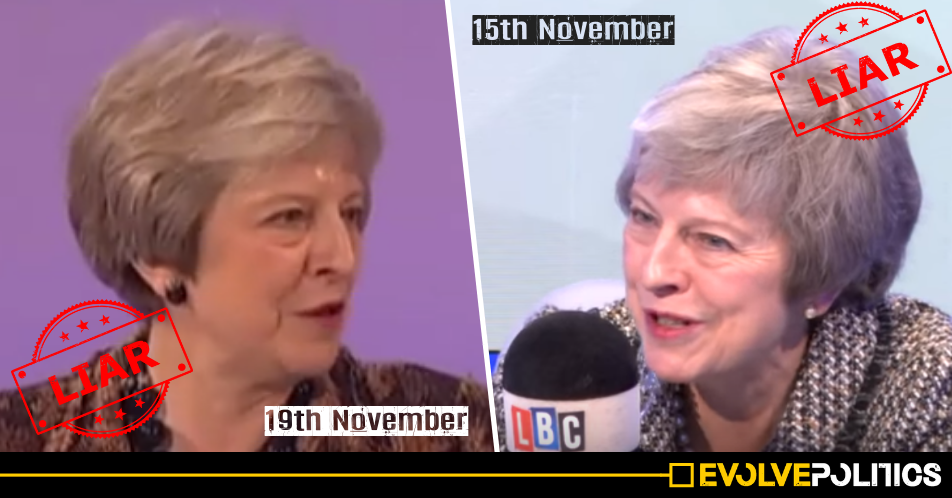 For the second time in just over half a week, the Prime Minister has attempted to convince the British public that something she was literally recorded saying did not actually happen. Yes, it is official – Theresa May really has gone “full Trump” twice in just four days.

During her speech to the CBI yesterday, Theresa May said that Brexit would stop EU citizens from ‘jumping the queue’ to land jobs in Britain, adding that Britain’s exit from the EU would allow “engineers from Sydney or software developers from Delhi” the same chance to gain employment in Britain.

However, May’s words were widely criticised for their tone, with many accusing the PM of using dog-whistle anti-immigrant rhetoric to hammer home the point.

The leader of the Scottish National Party (SNP), Nicola Sturgeon, argued that using such accusatory language to describe how EU migrants legally entered the UK was “offensive” and “disgraceful“.

Actually, the more I think about it, the more offensive ‘jump the queue’ is as a description of a reciprocal right of free movement. Really disgraceful.

Furthermore, as if the UK’s relationship with the EU couldn’t get any worse, May’s words also appeared to rile the EU’s lead Brexit coordinator, Guy Verhofstadt, who tweeted:

“EU citizens living, working, contributing to UK communities didn’t “jump the queue” & neither did UK nationals in Europe. They were exercising rights which provided freedom & opportunities. We will fight to ensure these continue in the future, especially after any transition. “

EU citizens living, working, contributing to UK communities didn't "jump the queue" & neither did UK nationals in Europe. They were exercising rights which provided freedom & opportunities. We will fight to ensure these continue in the future, especially after any transition. https://t.co/p49HlFuUtw

However, just hours after the words were recorded being spoken by the Prime Minister, Theresa May’s spokesman attempted to deny that she had ever said them.

“Theresa May’s spokesman denies the prime minister has suggested that EU citizens have “jumped the queue” to work in the UK. Here’s what she said in her speech.”

Theresa May's spokesman denies the prime minister has suggested that EU citizens have "jumped the queue" to work in the UK. Here's what she said in her speech. pic.twitter.com/t1c6spW2hL

And if you were still in any doubt as to whether the words actually came out of Theresa May’s mouth, EU Professor Steve Peers literally watched it happen:

The Prime Minister said "jumped the queue" in public. I *watched* her say it. And her office lies that she never said it? Orwellian Trumpy gaslighting. https://t.co/1AuRrbwaZ4

But if that still isn’t enough evidence for you, here’s a video of her literally saying the words:

Today’s latest blatantly false denial from Theresa May’s office comes hot on the heals of the Prime Minister herself making a similar Trumpesque reality-reversing reposte regarding comments she was again literally recorded making – this time to the Police Federation in 2015.

At the height of May’s tenure as Home Secretary, she presided over swingeing cuts to the police force – cuts which have now resulted in 21,000 police officers being made redundant and crime levels soaring.

However, when Theresa May went public with her proposed cuts in 2015, the Police Federation were unsurprisingly unhappy, warning that such drastic measures would lead to a sharp increase in crime.

Yet, Theresa May decided to ignore all the warnings, accusing the police of “crying wolf” over the potential effects.

However, during her radio phone-in appearance on LBC last week, Theresa May denied that she had ever used the term.

“Weren’t you the Home Secretary who said they [the Police] were crying wolf at a Police Federation meeting once?”

Theresa May responded by claiming:

Why not judge for yourself if she did by watching the video below:

Watch: This morning Theresa May denied she had ever told the police to "stop crying wolf". This is a blatant lie, see for yourself.

How much longer will broadcasters tolerate this shameless lying from Tory politicians? pic.twitter.com/NOwmskqI3W

Just when you thought Donald Trump’s ridiculously brazen lies could never ever be matched, along comes a Tory Prime Minister to challenge him by doing exactly the same thing twice in just four days.

We really can’t state this enough: you can never, ever trust a Tory.