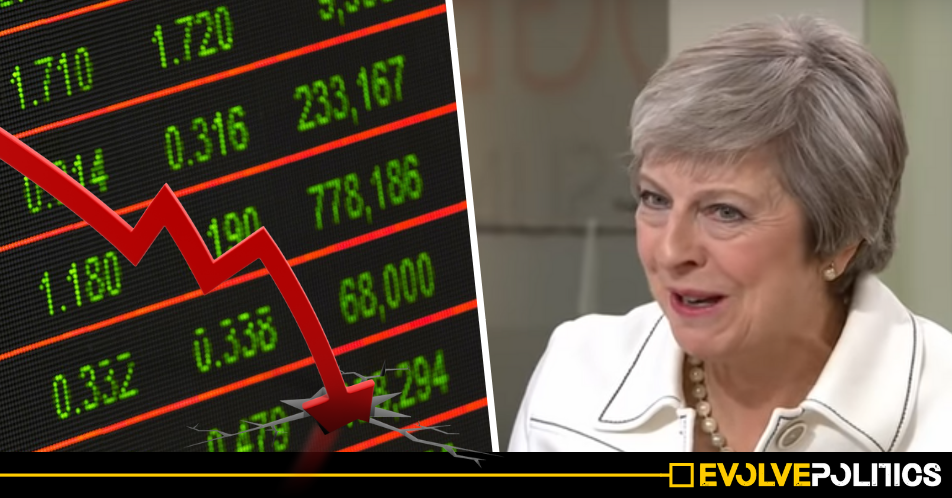 The Conservative government are plotting to “engineer a financial crash” in order to “terrify” Members of Parliament into voting for Theresa May’s increasingly unpopular proposed Brexit withdrawal agreement, it has been claimed.

The incredible Tory plot, which would almost certainly result in thousands of Brits losing their jobs, was leaked following the release of Theresa May’s draft Brexit plan.

After publishing the draft Brexit document last week, Theresa May’s position as Prime Minister is now hanging on a knife edge, with a vote of no confidence against her leadership now looking increasingly likely.

It is also widely thought that May’s Brexit withdrawal bill has nowhere near enough support from MPs to gain approval in the House of Commons.

Last week, Theresa May spent 3 hours in Parliament defending her Brexit bill from a barrage of criticism, with only a handful of MPs indicating support.

And, following the emergence of this near-universal hostility to her plan, it is believed that Theresa May and her aides began to devise numerous plans to try and force MPs into supporting it, including one plot to “encourage” a financial crash.

A source within the government who had discussed the unprecedented plan with Theresa May’s aides claimed:

The astonishing revelation that the Tories may be planning the deliberate destruction of our economy in order to push through their widely despised Brexit deal has been described as a “national scandal”:

With Theresa May and the Conservative Party having spent much of the past two years lambasting the Labour leadership for supposedly preparing for a run on the pound should they get into government, the emergence of this latest Tory plot to essentially intentionally destroy Britain’s economy in order to get their own way is both astonishingly hypocritical and incredibly dangerous.

The Tories have also spent much of the last 10 years using the increasingly desperate line that somehow Labour’s ‘profligate’ public spending was the cause of the devastating 2008 financial crash.

However, should a financial crash occur on the Tories’ watch – especially one that has been intentionally encouraged by the Prime Minister, rather than one that occurred as a result of Britain’s wholly irresponsible banking institutions – it would indeed amount to a national scandal, and one that would almost certainly result in support for the Conservative Party plummeting.