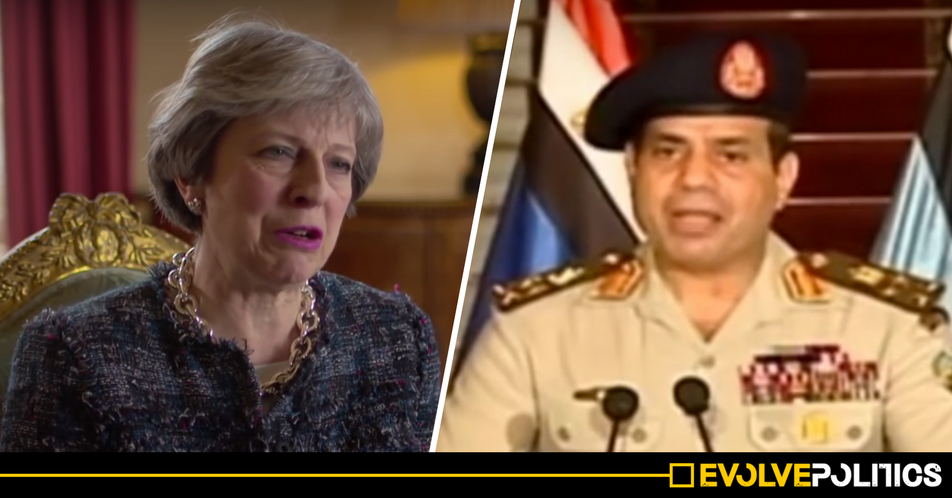 Just days after a multitude of Conservative MPs labeled the European President Jean Claude Juncker as ‘shameful‘ and ‘disgraceful‘ for congratulating Russian President Vladimir Putin on his ‘winning’ a landslide election victory with 75% of the vote, Conservative Prime Minister Theresa May has congratulated the brutal Egyptian Military Dictator President Sisi on his landslide victory – which he “won” with 97% of the “vote” on Tuesday.

The Conservative government quietly sneaked out a press release stating that the Prime Minister Theresa May had “congratulated President Sisi” – a brutal dictator who had all viable election opponents “arrested, barred or forced to withdraw“, and who routinely tortures protestors and political opponents – “on the chance to take Egypt further along the path of democratic transition“.

President Sisi is famed for arresting virtually anybody who he even suspects of disagreeing with his iron rule, with Human Rights Watch documenting many particularly gruesome stories.

A lawyer called Mustafa was arrested by security forces without a warrant and tortured because of his political beliefs, with Human Rights Watch reporting Mustafa’s story, stating that:

“The interrogator wrapped what felt like wires around the little fingers on Mustafa’s right and left hands and shocked him with electricity intermittently for around 30 minutes. Then the men removed Mustafa’s pants and underwear and made Mustafa sit on the floor and spread his legs on either side of a chair. Someone wrapped other wires around the little toes on Mustafa’s left and right feet and shocked him again with what felt like a stronger and more painful current of electricity. Someone removed one of the wires and wrapped it around Mustafa’s penis and shocked him again. When Mustafa lost consciousness, an officer woke him by punching him in the face.”

Human Rights Watch documented the story of another of Sisi’ torture victims, Omar al-Shuweikh, who had participated in street protests against the Egyptian government, stating:

“The men in this room forced al-Shuweikh to the floor, pulled down his pants and underwear, and inserted their fingers in his anus. Then they inserted what felt like a wooden stick.

“Now look at what we’re doing to you,” one of the men said. “You were acting like a man outside, you were taking your shirt off and saying the Interior Ministry are thugs. Here we are and we’re f*cking you. We’ll make you pregnant.”

This initial experience lasted for about six minutes, after which the officers continued the interrogation for around three hours, al-Shuweikh said. The officers hung him in a stress position, shocked his testicles, hands, and his handcuffs with electricity, raped him with a stick, and squeezed his testicles.”

Just two weeks ago, Ashley Fox, the leader of the Tory MEP’ said that EU President Jean Claude Juncker’s decision to congratulate “Vladimir Putin on his election victory without referring to the clear ballot rigging” was “nauseating“.

Neither Fox, Wollaston or Boles has yet had anything to say about the leader of their party Theresa May congratulating Egypt’s Brutal Dictator President Sisi on his election “victory”.

Theresa May has just congratulated military dictator President Sisi on his re-election and the chance to take #Egypt “further down the road of democratic transition”. #Sisi ‘won’ 97.08% of the vote, after all viable opponents were arrested, barred or forced to withdraw. pic.twitter.com/uiFNtiai5E