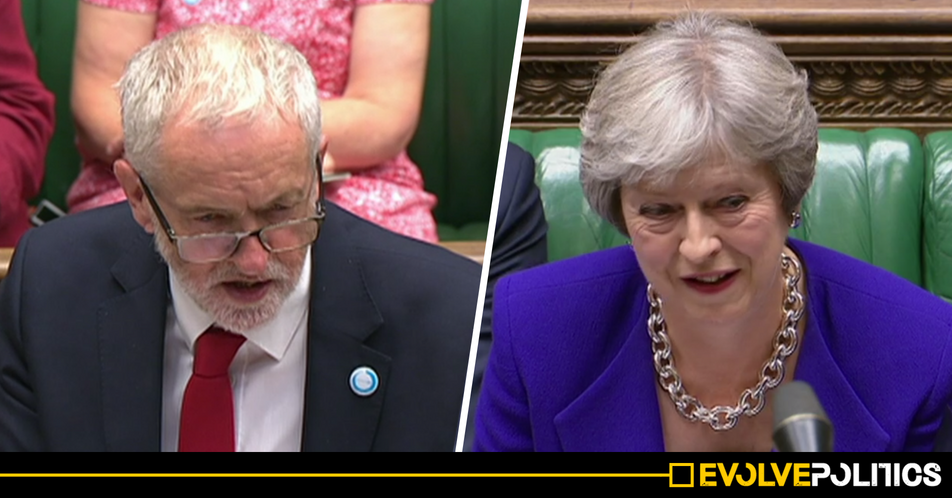 Theresa May’s flagrant disregard for the truth has been exposed once again after it was revealed that the Prime Minister’s claim that the Conservative Party had adopted the International Holocaust Remembrance Alliance (IHRA) definition of antisemitism in their rulebook was actually a complete and utter lie.

May’s claim that the party had adopted the definition into their code of conduct came in response to widespread publicity over Labour’s decision to include amendments to the IHRA text in their own rulebook – a move which, despite many in the mainstream media using it as an excuse to throw yet more unfounded accusations of antisemitism at the Labour leader, actually strengthens the definition of antisemitism, whilst also ensuring free speech and legitimate criticism of the highly controversial actions of the Israeli government can not be unfairly curtailed.

On Wednesday at PMQs, the Prime Minister laid into the Labour leader over the subject in a response to a planted question from one of her Tory backbenchers.

In what was a clear dig at Labour’s amendment of the text in their rulebook, Helen Whately, the Tory MP for Faversham and Mid Kent, asked the PM whether she agreed that all political parties should adopt the IHRA definition of antisemitism in their own codes of conduct “without amendments or omissions”.

Theresa May responded by claiming that the Conservative Party had signed up to the full IHRA definition “and all its annexes“.

However, research by Channel Four FactCheck has revealed that Theresa May’s claim that the Tories had adopted the definition in their rules cannot actually be backed up with any evidence whatsoever.

When asked by FactCheck where exactly in their rulebook the Tories had adopted the IHRA definition of antisemitism, Tory HQ responded by simply linking to an announcement by the government which states the government were planning to adopt the definition.

However, the Conservative Party’s latest Code of Conduct – released a full year after the Tories’ announcement that they would be adopting the definition – does not only fail to include the IHRA definition, it doesn’t even mention the word ‘antisemitism’ anywhere whatsoever.

The Tories’ Code of Conduct merely states that their adopted definition of discrimination:

Compared to Labour’s rulebook, the Tories is shamefully lacking in any detail – a fact that is in stark contrast to Theresa May’s proud, and now obviously entirely fraudulent, boast last Wednesday.

This utterly ridiculous situation shows that, rather than genuinely wanting to stamp out racism in all its forms, Theresa May and the Conservatives are only interested in using the subject to score political points against their opponents – even if it means completely fabricating lies and just hoping she don’t get found out.

Jeremy Corbyn has spent his entire life genuinely fighting against racism in all its forms for no other reason that it is the right thing to do.

This is in comparison to Theresa May’s shameful record of willfully implementing a ‘hostile environment’ against immigrants, putting ‘go home’ vans on our streets in order to scare them, and wrongfully deporting British citizens of the Windrush generation – and these disgraceful examples of endemically racist policies really are only the tip of the iceburg when it comes to the Tories.

The Conservative Party are currently embroiled in a racism storm of their own – one which both their lackeys in the mainstream media are doing their best to dutifully ignore, and one which the party themselves are doing absolutely nothing to solve and just hoping goes away on its own.

The contrasting visions of Britain’s two main parties have probably never been more different – but by choosing to attack a life-long anti-racist campaigner on the subject of racism is a tactic that will surely come back to haunt the party that has, since its inception, done everything it possibly can to divide communities by race, religion, and colour in the vain hope of ensuring that the British public are too busy fighting amongst ourselves to actually realise that it is not the poor and powerless, but the rich and powerful, who are truly the ones we need to be standing up to.

Update: Since Channel 4 FactCheck exposed Theresa May’s lie, the Tories have sneakily added a line to their rulebook which simply reads “which should be interpreted as fully adopting the International Holocaust Remembrance Alliance’s definition of anti-Semitism” after the “religion or belief” section of their Code of Conduct.