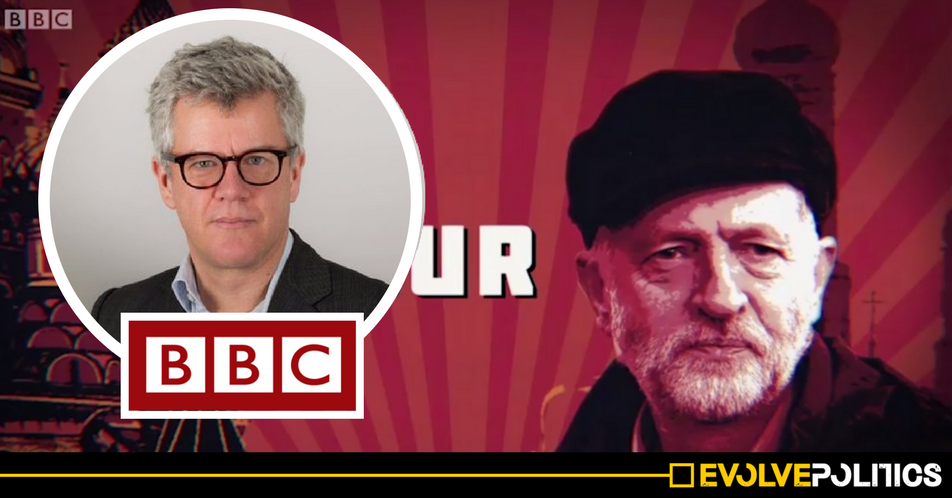 A top British barrister has sensationally claimed to be in possession of a letter from a Senior BBC figure that confirms ‘explicitly and unambiguously‘ that the British state broadcaster intentionally codes negative subliminal messages about the Labour’s opposition leader Jeremy Corbyn into its imagery.

Following numerous claims on social media that the BBC had ‘photoshopped’ a picture of Jeremy Corbyn to resemble a Russian stooge on its Newsnight programme, Jo Maugham QC, a high profile Barrister and Director of the Good Law Project, tweeted to say that he was in possession of significant evidence to prove that the BBC regularly did this sort of thing:

“I have a written message from a senior BBC bod explaining (unambiguously) that the BBC does code negative messages about Corbyn into its imagery.“

However, Maugham was quickly inundated with responses doubting the validity of his claims, to which he then responded by stating:

“Lots of people doubt this is true. That’s fair enough given how little detail I feel able to provide. But I’m hardly a Corbyn fan. And it’s a very big deal for a QC deliberately to tell a lie.”

Maugham – a high profile tax lawyer at Devereux Chambers who regularly provides comment on tax issues by numerous respected publications such as the Financial Times and The Guardian – also stated that he would be willing to “swear a witness statement” on the truth of his tweet, and has since followed up his statement with a blogpost confirming just how serious he is about making good on the claim.

Maugham began the blogpost by explaining that “there are further matters I can add that would add context and meaning to my tweet“, before entering into a five-pointed list explaining the evidence he holds and what he is legally allowed to say.

Maugham’s post, which is extremely careful to keep the identity of the BBC figure who leaked the information secret – naming them only as ‘X’ – went on to claim that the BBC figure wrote to him explaining “explicitly and unambiguously about how criticisms of Corbyn that the BBC could not voice were deliberately coded into imagery.“

Maugham’s blogpost also went on to say that the Senior BBC figure ‘clearly understood that [their] comments were sensitive for the BBC“.

Below is Maugham’s extraordinary blogpost in full:

“Yesterday I tweeted this:

Just remembered I have a written message from a senior BBC bod explaining (unambiguously) that the BBC does code negative messages about Corbyn into its imagery.

And I went on to explain why I would not give any further information. But I think there are further matters I can add that would add context and meaning to my tweet.

Evolve Politics have contacted the BBC for comment on whether Mr Maugham’s claims are true and how they could potentially impact on the corporation’s supposed impartiality.

The BBC refused to make a statement when approached – but asked Evolve to link to the following tweets which reflect their position:

Indeed and despite being a Dep Ed at Newsnight, Editor of Marr and Editor of Live Political Programmes, NOBODY HAS TOLD ME!

Hi Richard – have already said that any such person must be having Jolyon on. If it were true you'd think I would have been told, being the Editor of Live Political Programmes for the BBC!

Oh for goodness’ sake! I didn’t even see the tweet – it’s Sunday, I’ve been busy with life. I would genuinely love to see what he is talking about, I haven’t a clue, it doesn’t even make sense to me. Wish he would just show us all