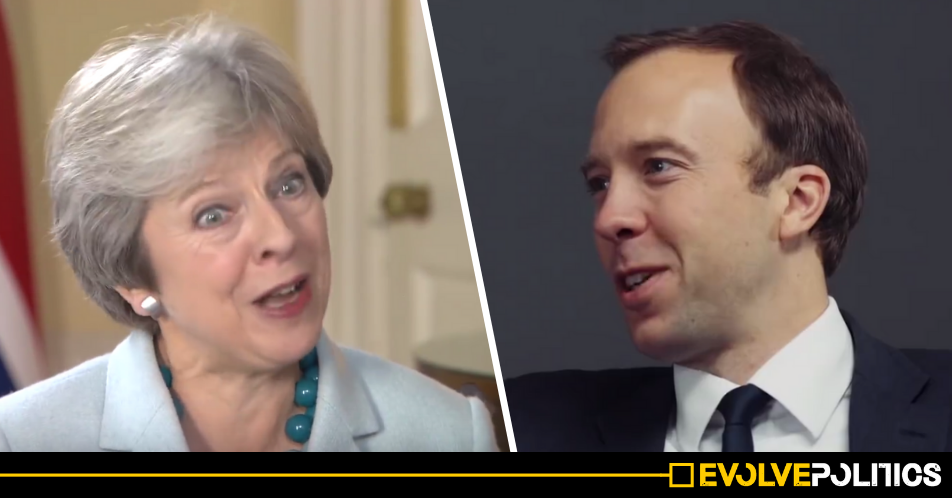 Last week saw the observation and recognition of World Mental Health Day across the globe. Coinciding with this annual event was an international two-day mental health summit held in London. However, one key group appears to have been “blocked” from having any meaningful involvement in the event. Yes, you’ve guessed it. The Tories decided to completely shut out mental health patients and user-led UK mental health organisations from their own summit.

The Disability News Service (DNS) reports that two open letters have scalded the way in which the Global Ministerial Mental Health Summit was organised by the Conservative Party.

Along with severely criticising the Tories for excluding them, multiple mental health user-led and survivor groups noted the brazen hypocrisy of the event being hosted by a UK government who, barely over a year ago, were severely criticised for their shameful record on disability rights by a UN committee.

Speakers at the summit included: Tory Health Secretary Matt Hancock, Tony Blair’s former Spin-Man Alistair Campbell, as well as politicians from around the world, such as the Canadian Health Minister.

As you would expect, representatives also came from the medical profession, such as the National Clinical Director for Mental Health Tim Kendall, and Helen Herrman, the President of The World Psychiatric Association.

However, also speaking was Richard Curtis – a man you may remember as one of the people who wrote the classic BBC comedy, Blackadder.

Yes, despite the lengthy guest-list, it seems that both mental health patients and user-led groups were, for whatever reason, not deemed as important as people like Hancock, Campbell, or indeed one of the people who once wrote a popular television series.

The Tories’ unprecedented decision to exclude all of these crucial groups from the list of speakers was furiously attacked in two open letters to the organisers of the Summit.

The letter was signed by over 100 organisations and individuals, including mental health service users, survivors, user-led networks, academics, as well as mental health professionals from more than 20 countries, including Argentina, Peru, India, Chile, Columbia, Japan, Kenya, Estonia and Hungary.

The letter says that there was little to no communication with user-led disability organisations in planning the summit, and also notes that the Tories’ decision to exclude them entirely was a blatant breach of the UN Convention on the Rights of Persons with Disabilities.

The letter also touches on the shameful attempt by the Tories to position themselves as a supposed world leader on mental health when the UN committee on the rights for disabled people has repeatedly found that their policies are in severe breach of disability rights – with one UN report in 2016 finding the Tories guilty of “grave and systematic violations” of the convention.

Also noted within the letter were the levels of discrimination within UK mental health services faced by black and minority groups, including “high levels of misdiagnosis, compulsory treatment, over-medication, community treatment orders and culturally inappropriate treatment”.

The letter then goes on to warn that the mental health service-user and survivor groups in the global south have objected to attempts – led by our atrocious Tory government – to import “failed western models of mental health care” into their countries.”

It also calls out the government for their sickeningly “hypocritical” attempt to take the lead in creating a “global declaration on political leadership in mental health”.

Those signing the heavily supported letter finished by demanding that the government commits to putting forward any declaration that comes out of the summit out for consultation, and then ratification, by a wide range of international and domestic user-led disability organisations. 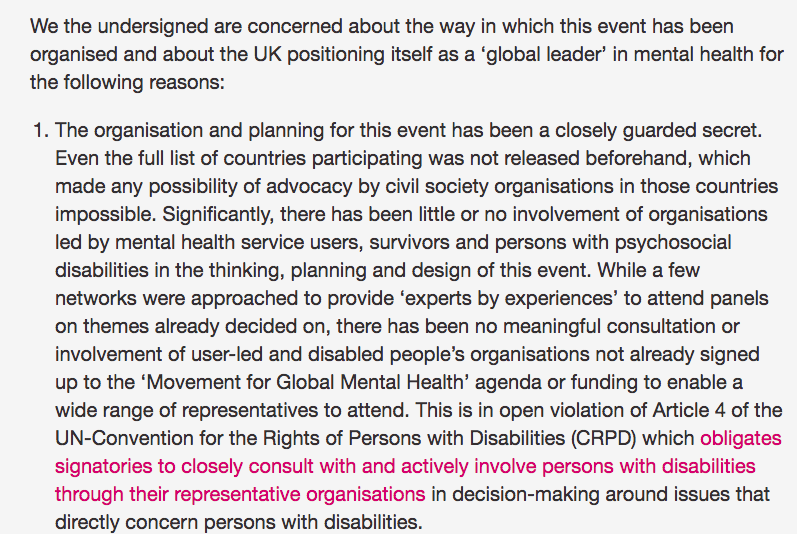 The second letter was headed by the national service-user network, Shaping Our Lives (SOL), and was signed by NSUN and many other user-led grassroots organizations including the Mental Health Resistance Network, Disabled People Against Cuts and Recovery in the Bin – all of whom had also signed the first letter.

The later letter expresses severe concerns that the summit would “seriously misrepresent the issues and problems of mental health and mental health service users globally” due to the “systematic exclusions” of representatives of user-led and survivor organisations.

The Disability News Service (DNS) reports that they have seen a letter from ENUSP to a Department of Health and Social Care (DHSC) civil servant which was sent after both groups failed to receive invitations to take part in last week’s summit.

ENUSP made suggestions about a range of elected representatives from member organisations across Europe who could attend, and pointed out that it was “the only grassroots, independent representative organisation of mental health service users, ex-users and survivors of psychiatry at a European level since 1990”.

NUSP stressed the importance of having “representative people with lived experience at the Summit”, however, shockingly, the civil servant turned down the offer, saying there were only spaces left for representatives to take part on the area of finance and investment at the summit.

However this is a specialist area where ENUSP representatives clearly wouldn’t be able to make any significant contribution.

Reflecting this fact, the SOL letter stresses that:

This failure to enable involvement also reflects wide and growing concerns about the inadequacy of and crisis in UK mental health policy and provision and the failure to listen to service users, their families, communities and organisations in both mental health and welfare reform policy, both of which are having catastrophic consequences for many service users, their families and communities.

When asked to comment on the two letters by the DNS, a government spokeswoman said:

All dialogue on mental health is key; we have invited a range of people from those with lived experience, to civil society, academics and policy makers who represent more than 65 countries from around the world.

We have ensured that the involvement of people with lived experience ‎has run throughout our work on the summit, with their experiences at the heart of our advisory panel and in every workstream.

Those with personal experience attending were nominated by representative groups of people with lived experience – this group of consultees include the convener of this open letter and the signatories include people who are attending the summit.

We recognise there is further work to do for all countries on mental health which is exactly why this summit is such a vital step.

However, the spokesperson declined to say whether any declaration from the summit would be put forward for consultation and ratification by user-led organisations as disability rights groups had suggested, or whether the government would commit to leading by example by changing its discriminatory laws.

Notably, one of the authors of the SOL letter, Jasna Russo – a survivor-researcher from Germany and a member of ENUSP – explained that she was initially invited to attend the summit as an individual with lived experience, but after she asked if she could attend as a representative of ENUSP, her request for funding was rejected.

Regardless of how many countries they come from, there is a big difference between inviting persons with ‘lived experience’ and representatives of international grassroots organisations who are working on the summit’s topic for many years putting forward independent advocacy for users/survivors and people with psychosocial disability.

This gathering was simply not interested in such perspectives. As in many other involvement initiatives – people subscribing to the medical model of mental illness are far more attractive partners than those bringing in political and socio-economic issues.

Even though this summit talks about poverty in relation to mental health it seems much more focused on how to make the Western biomedical psychiatry go global.

It’s clear that, in a shameful attempt to hide their own horrific record on disability, our callous Tory government intentionally excluded ordinary disabled Brits from their own summit. How low can this shambles of a government possibly stoop.