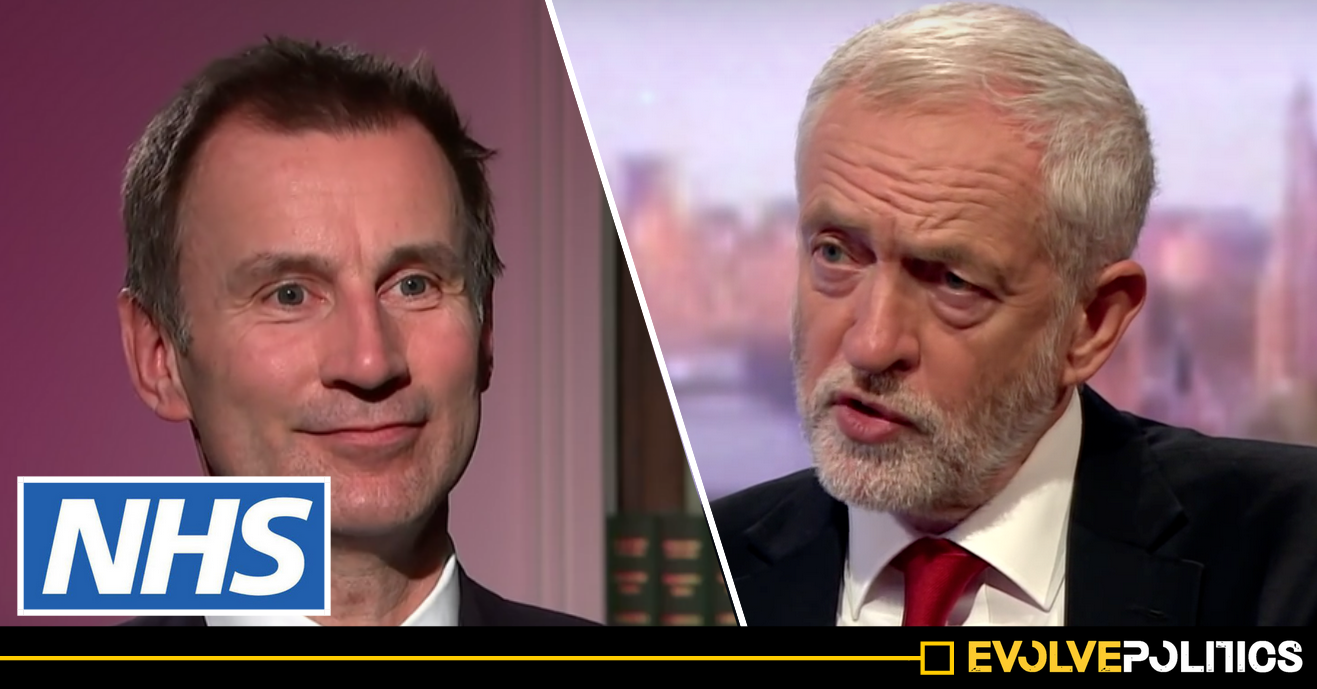 A former Medical Director in the NHS has exposed deeply worrying details of ‘secret’ plans hatched by the Health Secretary Jeremy Hunt to force through a ‘raft of secondary legislation’ (a method used by ruling governments to impose new rules without requiring a full vote in Parliament) that essentially allows the Conservative Party to hand unprecedented 10-15 year contracts to private healthcare firms to run NHS services – contracts that would be hugely expensive for any future government to get out of.

Jeremy Hunt’s ‘NHS-Americanisation’ style plan will reportedly give the Tories free reign to privatise numerous NHS services and award contracts that would ensure any future Labour government would have to pay through the roof to fully renationalise the service as they wish to do so, should they obtain power in the coming years.

The Tories’ latest plan to ‘save’ the NHS is by establishing Accountable Care Organisations (ACOs), a system propagated in the highly inefficient privatised United States healthcare system. These ACOs will be given the power to make the most important decisions about how to allocate NHS funds, resources and medical care for people in certain areas.

Currently, this vital service is performed by publicly accountable bodies who are regulated by law, and established by Parliament after thorough public consultations, not to mention an intense public debate in which we all get a chance to voice our opinions and views on our NHS.

ACOs, however, are the complete opposite and can be run entirely by the private sector and not-for-profit bodies. Shockingly, ACOs are not mentioned in any current legislation and are therefore not subject to the statutory duties that the rest of the NHS must abide by.

But it gets even worse: NHS England already has plans to establish several of these ACOs.

However, despite these concrete proposal, no detailed policy plans have been presented to Parliament, and certainly not to the public – essentially veiling the latest Tory NHS privatisation plans incomplete secrecy.

In fact, so little is known about these ACOs that even the House of Commons library relies on definitions given by the King’s Fund think tank.

Hunt is reportedly already planning to push through secondary legislation in just a few weeks time in February, meaning that the first ACOs could be up and running as soon as the beginning of April this year. This legislation will not require a full parliamentary vote, thus meaning that absolutely no public or parliamentary scrutiny will be given to it.

Furthermore, there are multiple problems with the Tories plans to hand out extraordinary 10-15 year contracts to run services – contracts that have led increasingly to massive corporations essentially siphoning billions of taxpayer money in the pockets of shareholders.

It’s safe to say that just uttering the word ‘Carillion’ is enough to send shivers down our spines – even more so when you consider that under the Tories’ latest proposals to implement ACOs, Carillion-type financial meltdowns could become commonplace in the NHS, with vital services and people’s lives at risk should these truly shocking plans be allowed to go through.

Let us also not forget the fact that Richard Branson’s widely-loathed Virgin Care corporation had the temerity to sue the NHS, selfishly raking in yet more taxpayer money – another example of how allowing private companies into the process of providing healthcare inevitably morphs into ridiculous taxpayer handouts for massive corporations for increasingly poor services.

The NHS is already paying out hundreds of millions to offshore finance companies for hospitals that cannot actually be paid for through disastrous Public Finance Initiative (PFI) scams – initially instigated by the Tories under John Major, but which proliferated under a Tory-lite New Labour led by Tony Blair.

Furthermore, the horrendous cost of our privatised railways – both to taxpayers in subsidies to the private companies that run services, as well as the extortionate ticket prices rail passengers are now forced to pay – clearly show us that such privatisation schemes are now provably discredited, always leading to inefficient services, huge costs to the taxpayer and customers, and conveniently (for the Tories and their wealthy mates at least) resulting in millions upon millions of public funds flowing into the pockets of the super-rich.

Former Medical Director of the NHS and Deputy Chief Medical Officer, Dr Graham Winyard, expressed his alarm at Hunt’s latest secret privatisation plan, and is calling on the medical profession and public to defend our NHS from this latest despicable Tory attack, outlining the impending crisis in a deeply worrying article for Politics.co.uk.

Dr Winyard states that he and many concerned colleagues are pushing the Tories through judicial review, writing that:

Jeremy Hunt and NHS England’s latest big idea is Accountable Care Organisations (ACOs). These bodies would be allowed to make most decisions about how to allocate resources and design care for people in certain areas.

At the moment, that’s done by public bodies whose governance is regulated by statute, set up by parliament after wide consultation and sometimes fierce debate. ACOs, by contrast, can be private and for-profit bodies. They are not mentioned in any current legislation and would have no statutory functions. They are not subject to the statutory duties imposed on other parts of the NHS.

Although NHS England plan to get several ACOs up and running this year, no detailed policy proposals have been presented to parliament or the public. Indeed, details are so sparse that the House of Commons library briefing is forced to use definitions provided by the King’s Fund, a health think tank.

Hunt is planning to lay a raft of secondary legislation – which doesn’t require a full parliamentary vote – in February, so that the first ones can be up and running by April 1st.

The ACOs are going to be given long-term commercial contracts of between ten and 15 years. We know these are difficult to get right and expensive to get out of. Think of Virgin and the East Coast Main Line or the private finance initiative, which has left the NHS paying hundreds of millions to offshore finance companies for hospitals that cannot now be afforded. Warnings about risks of PFI were once brushed aside as alarmist, often by the same people who now dismiss criticism of ACOs in similar terms.

I’m working with four colleagues to challenge these proposals through judicial review. Our case is not concerned with whether ACOs are a good or bad idea. That’s for parliament and the public to decide, not the courts. Our case is that such a radical and significant change cannot lawfully be introduced and implemented without public consultation, parliamentary scrutiny and primary legislation.

The case was filed on December 11th and clearly struck a chord with the public. They’ve provided £176,000 through crowd funding in over 6,000 donations.

We are also deeply concerned that by using contracts instead of statute to allow ACOs to operate, the government is exposing the NHS to major risks.

We’re concerned that ACOs will be governed only by company and contract law, yet can be given “full responsibility” for NHS and adult social services. Because they span free health care and means-tested social care, ACOs will be able to decide on the boundary of what care is free and what has to be paid for.

They can include private companies – including private insurance and property companies – which will make money from charging. Their accountability is unclear, in spite of their name, yet they will be given long-term contracts and be allowed to make “most decisions” about how to allocate NHS resources and design care for the local population.

They will have control over the allocation of huge amounts of taxpayers’ money, yet their accountability for spending it and their obligations to the public would be under commercial contracts instead of statutes. The parallel with railway franchises seems inescapable. And by establishing them this way, it’ll be harder to exclude ACOs from free trade deals.

Lots of serious people are genuinely worried and object to their fears being brushed aside. If ACOs are not opening the door to greater privatisation of the NHS, why is their detailed documentation so explicit that they can indeed be private bodies?

We are not zealots opposed to change. We’re simply people who care about the founding principles of the NHS, have taken the trouble to read the small print and have the experience and knowledge to understand its implications.

If ACOs are now seen as being central to the delivery of effective health and social care, they should be set up as proper public bodies with clear democratic accountability. This would require a detailed explanation, proper public debate and the kind of parliamentary scrutiny that primary legislation demands.

Winyard also notes that Hunt’s latest NHS privatisation plot is being essentially ignored or overlooked by the mainstream media in lieu of Brexit reportage, opening his article by writing:

Brexit’s dominance of media coverage and parliamentary time is providing the perfect cover for controversial reform of the NHS by stealth.

If the Tories push this disgusting plan through, they will also be allowed to saddle the next Labour government with potentially tens of billions of pounds worth of contracts with private healthcare corporations that, given the unprecendent length of contracts the Tories are reportedly planning to hand out, would be extremely expensive for any government to get out of.

With the Carillion, and Virgin scandals hitting the headlines in recent weeks, and with public opinion now overwhelmingly supporting the full renationalisation of our NHS and railways, the Tories’ beloved mass privatisation agenda really is beginning to hit the rocks.

But whilst the Tories’ evidence-free ideology is crumbling, we desperately need to keep up the pressure to ensure their plans for our NHS aren’t allowed to go through – because if they do, it will be an utter disaster for Britain’s most-cherished institution, just as the Tories are hoping.