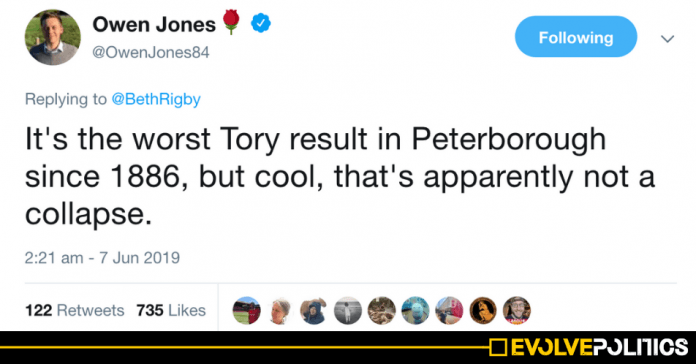 The Conservative Party suffered their worst election result in Peterborough since 1886, with their vote share plummeting by a staggering 25.5% to finish in third place behind Labour and the Brexit Party in yesterday’s Peterborough by-election.

However, despite the results clearly being an absolute catastrophe for Theresa May’s Tories, Sky News presenter Beth Rigby didn’t seem to agree.

As the results were announced, Rigby inexplicably tweeted that the Tories losing 15k votes was somehow “not a collapse of the Tory vote“:

And.. that is not a collapse of Tory vote https://t.co/LczGqsZfFj

Unsurprisingly, many were quick to question her wisdom:

It appears to be the lowest Tory vote in the seat for 100 years. Given the Labour MP just went to prison I’d suggest that’s a very bad result. https://t.co/gR8o0TuaTN

Um…a decline of 25.4 percentage points absolutely IS a collapse in the Conservative vote.

Ouch, and that’s how to tarnish your reputation in one quick tweet folks