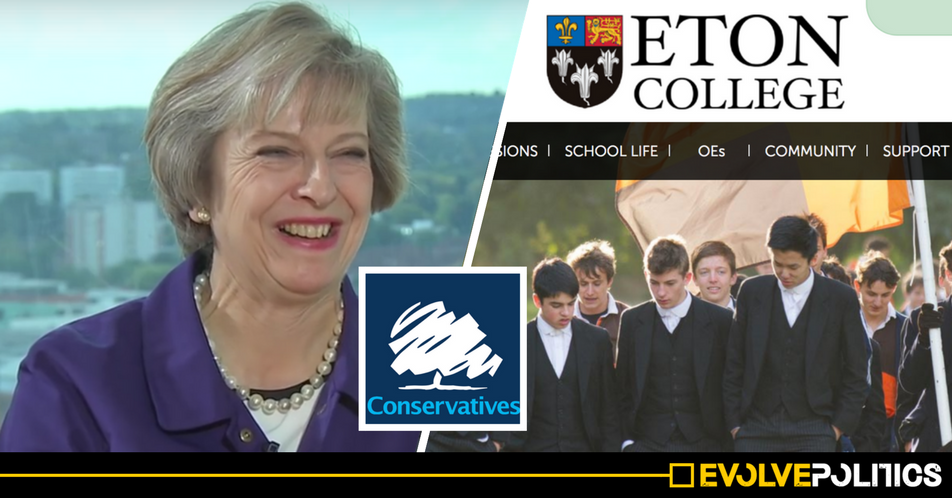 The Conservative government are about to hand yet another tax-break to the rich as plans to give wealthy parents £2,000 each in order to send their children to elite private schools are due to come into effect next month.

This ridiculous financial aid for rich parents comes as part of the Tories’ ‘tax-free childcare scheme‘ – due to be in place across the country by March 2018 – which will give a 20% Government top up on money spent on childcare, with a limit of up to £2,000.

The scheme will allow parents to claim support for kids sent to fee-paying private schools, despite the fact that the Tories had promised to phase out taxpayer support for private school fees under the old system of childcare support.

As the Morning Star reports:

The scheme explicitly allows parents, who each earn a taxable salary of under £100,000, to claim government support for children aged between five and 11 sent to fee-paying “independent” schools that are registered for the scheme.

Under the scheme, parents get up to £500 every three months for each child, which equates to £2 from the government for every £8 parents spend on private school fees.

Speaking about this Tory plot to give elite private schools yet another taxpayer handout, Peter Dowd MP, Labour’s Shadow Chief Secretary to the Treasury, said:

It is shocking that the Government seek to give thousands of pounds to the richest families, so they can send their children to private school while state education funding is slashed.

This is another handout to the wealthy by this Government for the few. The Government must immediately exclude private school fees from subsidy under their new programme, and invest in our education system to ensure that it works for the many, not just a privileged few.

The next Labour Government will simplify Britain’s broken childcare system and invest to offer 30 hours of free childcare to all 2-4 year olds.

Whilst a government spokesperson simply said:

Tax-Free Childcare will cut thousands of pounds from childcare bills and is good news for working parents.

It supports eligible parents with their childcare costs up to the age of 12. For schoolchildren, that is for breakfast, holiday or after-school clubs outside of standard school hours.

Since the Tory attack on public services began in 2010 school budgets have been slashed and our education system decimated in the process. In 2017 it was estimated by National Audit Office that by 2019/20 schools will have had their budgets cut by at least £3 billion.

The situation has led to a chronic teacher shortage, schools being forced to beg parents for money at the school gates for basics, teachers buying school supplies such as glue sticks, and even the possibility of having to close schools for 1 day of the week just to keep them going.

At the same time, private schools have continued to enjoy around £700 million in taxpayer handouts.

The campaign group schoolcuts.org.uk has produced an interactive map to show how your local school and community has been affected by the cuts to demonstrate just how severe the Tory attack on working-class education is.

Previously, Jeremy Corbyn has spoken about the need to properly tax these private schools and use the money raised to fund school dinners for all children – but the mere mention of potentially taxing the elites was met with a fury of media outrage and horrified posturing: a clear display of just how dominated by monied interests the political discourse in our mainstream media has become over the years.

The last thing that these elite parents need is yet another taxpayer handout, yet this is precisely what the Tories are planning to do in a complete betrayal of their earlier promise.

These so-called ‘independent’ schools – who, as they are still allowed to register as charities, are able to avoid paying tax – must finally be forced to pay their fair share and actually contribute something to society rather than leeching off ordinary taxpayers.

Less academically-able children born to wealthy parents have a 35% greater chance at age 5 of going on to have a high-paying job than a clever child born into poverty – this situation is completely unfair, and simply perpetuates the ingrained injustice, unfairness and inequality still inherent in modern British society.

This latest Tory attack on our education system will no doubt make this divide even worse, in what is yet another grotesque display of brazen Tory class warfare.O