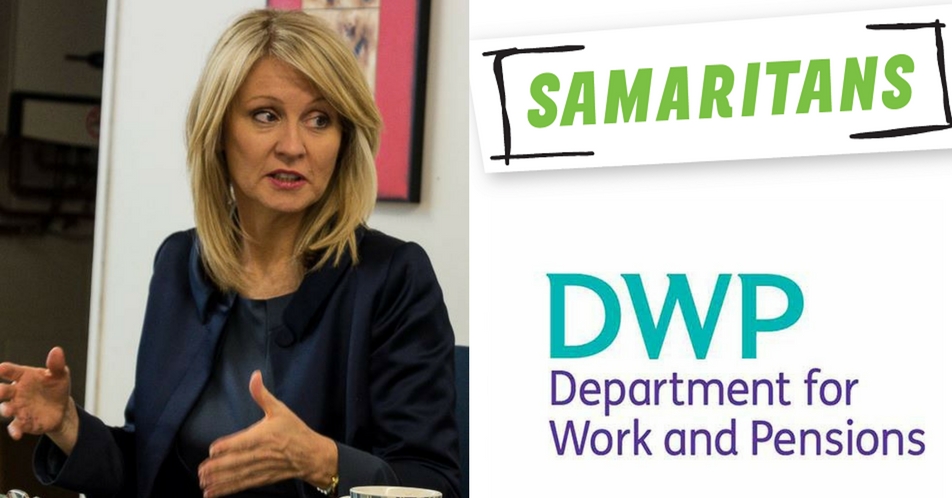 She says people having to go to foodbanks is ‘positive’. She justified huge cuts to disability benefits by saying that ‘bodies heal’, and she used misleading statistics to ‘stoke up antagonism’ towards disabled benefit claimants. Does this sound like the kind of person who should be advising a major charity which supports people in severe emotional distress?

And yet that is the case. It has been revealed that Esther McVey, the Secretary of State for Work and Pensions, and cheerleader for some of the most brutal welfare cuts of recent years, is an advisor to the charity Samaritans:

Hi Rick, Esther McVey MP is part of our advisory board, which provides us with informal support & helped us launch our 116 123 free to call number. You can find out more about what they do here: https://t.co/lRVFWxiR2q

Samaritans is a very well respected charity which provides a listening ear to anyone in emotional need. It has over 20,000 volunteers and works in prisons, schools and hospitals as well as offering a telephone and email helpline. In 2016, Samaritans volunteers answered 5.7m calls, a record high.

But Samaritans does more than just answer calls. It also analyses the reasons behind emotional distress. Last year, it produced a report ‘Dying from inequality: socioeconomic disadvantage and suicidal behaviour’.

The report looked at the factors which lead to increased suicidal behaviour amongst people in the most disadvantaged groups. One of the report’s authors, Associate Professor David McDaid, said:

Economic uncertainty, unemployment, a decline in income relative to local wages, unmanageable debt, the threat or fear of home repossessions, job insecurity and business downsizing may all increase the risk of suicidal behaviour, especially for individuals who experience socioeconomic disadvantage.

Which makes it all the more odd that Esther McVey is on Samaritans’ advisory board. McVey has made no secret of her belief that cutting welfare benefits to the poorest people in society is the right thing to do. She has become a hate figure after expressing opinions including that it was ‘positive’ that more people were going to foodbanks and that sanctioned benefit claimants are rather like schoolchildren who need to be taught a useful lesson:

McVey was a key player in the Department for Work and Pensions’ decision to replace Disability Living Allowance with Personal Independence Payment, which led to hundreds of thousands of disabled or chronically ill people seeing their payments stopped or reduced and their right to a Motability car removed. McVey justified the cuts by saying:

Only three per cent of people are born with a disability, the rest acquire it through accident or illness, but people come out of it. Thanks to medical advances, bodies heal.

In fact, McVey has made so many decisions which have appalling impacts on the most vulnerable people in our society that there’s no room to list them all here, but a good summary can be found in this post from the Disability News Service.

All this has made McVey one of the most despised of Tory MPs. Shadow Chancellor John McDonnell has described her as a ‘stain on humanity’.  Petitions have been set up calling for her to be sacked. One disabled campaigner said of her recent appointment as Secretary of State for Work and Pensions:

This is a terrible insult to every disabled and sick person.

The Samaritans’ report on suicidal behaviour and inequality makes the following recommendation:

Policies which lead to the reduction of socioeconomic inequalities should be adopted as part of trying to reduce suicide. Such policies should seek to reduce income inequalities and ensure universal high quality public service provision in health, education, housing and social security

Which is the exact opposite of what McVey is doing. Samaritans is a wonderful charity, doing vital work in the most demanding circumstances which have been made far worse by the decisions of the Tory government. The charity has this to say about people who might be thinking of contacting them:

We offer a safe place for you to talk any time you like, in your own way – about whatever’s getting to you. You don’t have to be suicidal.

But a lot of people who phone them are suicidal – and it would be the ultimate terrible irony if their suicidal thoughts were driven by the actions of one of Samaritan’s own advisors.