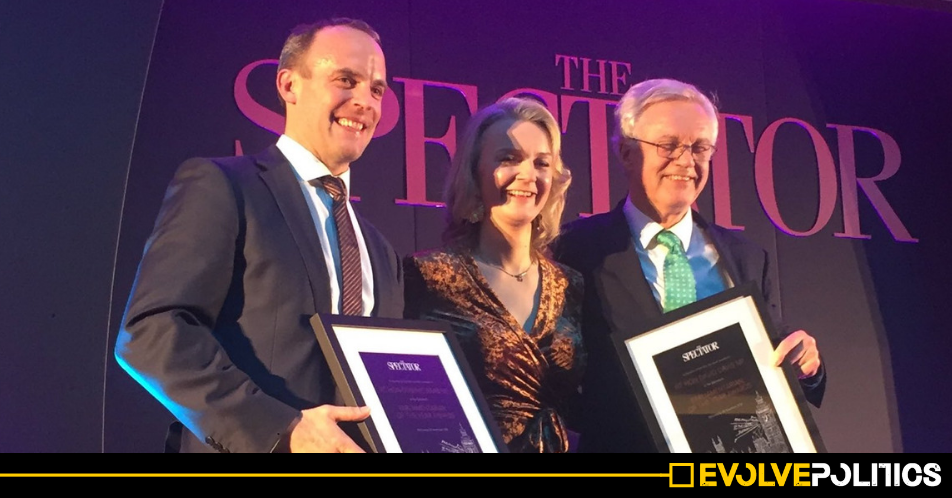 If you ever needed any more proof that this Tory government really are entirely detached and utterly uncaring to the real-world carnage their policies are causing for ordinary people, last night’s sickening Spectator Awards – an event where various mainly Tory politicians, accompanied by their mates in the media, literally laughed and joked about their role in destroying the country – will surely leave you shaking your head in absolute disgust.

The Spectator Awards is an annual event hosted by the hard-right Spectator Magazine which brings together politicians and journalists from across the country to essentially celebrate their own collective incompetence – and last night’s event was almost certainly the most repulsive there’s ever been.

The ‘highlight’ of last night’s event was the “Cabinet Resignation of the Year” award, which was jointly presented to former Brexit Secretaries Dominic Raab and David Davis, for their *hilarious* roles in completely cocking up Britain’s Brexit negotiations:

Cabinet Resignation of the Year, shared by Dominic Raab and David Davis – ⁦⁦@FraserNelson⁩: “The first 2 Brexit Secretaries of 2018” #SpecAwards pic.twitter.com/cSjgWkaYB1

Hilarious. Pissing around with people's livelihoods. I'm so glad it's all a game to them.

Everything that is wrong with the U.K. summarised in one picture

It's funny, because their casual incompetence has jeopardised the future hopes and prosperity of millions. @tnewtondunn @FraserNelson #SpecAwards https://t.co/0l6ZTBRKWH

You know what this is? The two former Brexit minister @DominicRaab and @DavidDavisMP picking up ‘resignation of the year’ award at the #SpecAwards @spectator. Brexit ain’t a joke. Tory ministers have no shame. No moral compass. pic.twitter.com/yO2jypdV5C

An award for cabinet resignations is quite something to begin with. But this? To some #Brexit seems to still be a joke. I wish all these people would have to walk in the shoes of someone #AlreadyNotFine They would not smirk like this after that. #SpecAwards https://t.co/HEEypLS767

If you ever wanted proof that the Westminster Bubble does actually exist and that politicians and journalists have no fucking clue how they are viewed just have a wee look at the #SpecAwards feed.

The state of this pair of cunts who’ve done as much as any Brexiter to to damage this country. The #SpecAwards appears to be an event for self-congratulatory right-twats to ignore their failures and pat each other on their evil, Tory backs. #Brexit https://t.co/tX6LHSI33v

Yes, whilst ordinary people suffer the devastating consequences of the Tories’ collective incompetence, the government, joined by their mates in the media, literally just proved they think it’s all one big joke.

However, thankfully, some politicians did have the sense not to attend.

Labour’s Shadow Chancellor, John McDonnell, was apparently awarded the title of “Politician of the Year” for the job of “selling Corbynism to the country“.

However, in true-Labour style, McDonnell rightly saw sense and refused to attend the repulsive event to collect it:

At least Britain has a few politicians left with morals, eh. Just a shame they’re not running the country. Yet.