This week, The Skwawkbox reported of a ‘remarkable admission’ from right-wing publication The Telegraph. Writer Tom Welsh appeared to insinuate that the more educated you are, the more likely you are to vote left.

The Skwawkbox interpreted this as:

“being unintelligent and uneducated helps you vote Conservative” 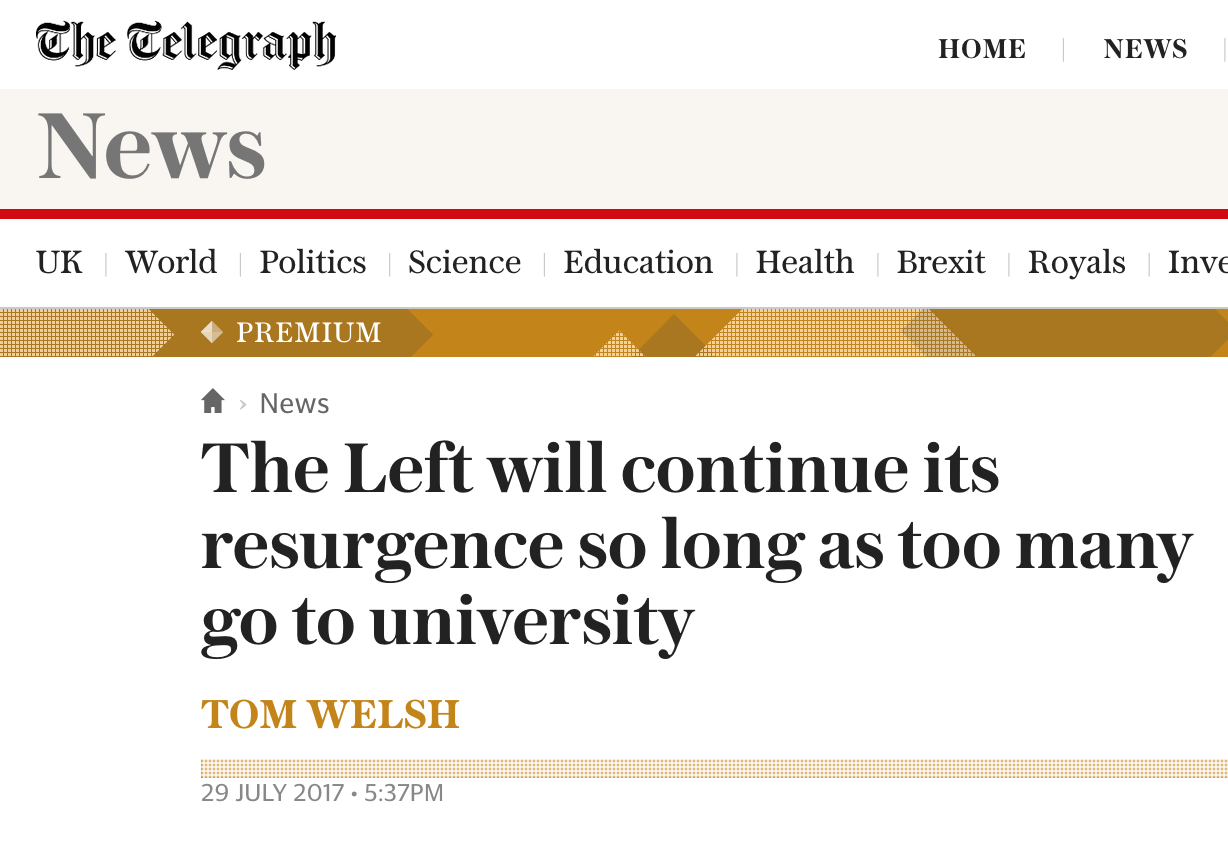 This echoes a huge movement against government and media practices that we hear of everyday in the independent media world. Society has seen that they are trying to keep people dumb and silent, and want to fight against it.

It is not just universities which threaten the Tories; they are systematically attacking every way of people becoming educated they can think of.

It isn’t hard to see that the Tories are trying to discourage young people from attending university. One of the first steps the Tories took when taking power was to treble the universities fees. Not only that, they have axed bursaries for nurses and removed maintenance grants for the poorest students.

So what is it about universities that would make students less likely to vote for the Tories?

University life is full of world-wide experiences; through meeting and living with people from all over the world, you get a grasp of wide variation of cultures. Having these experiences makes people much less likely to turn through fear to right-wing nationalism – they are far less likely to blame an entire race of people or religion if they have had close friends of those groups.

Libraries may soon be obsolete

Universities aren’t the only way people can learn things outside of their ‘bubble’, and increase their understanding of the world.

Libraries, for instance, have traditionally been a way for people to access knowledge, with many offering advantages such as trained librarians. These professionals have a rich history of helping people navigate through the enormous amount of information to find what they need.

However, since 2010 funding cuts have seen over 300 libraries close and they are still closing at an alarming rate – soon this way for average people to learn may be gone altogether.

Even the internet is not safe

The advancements of the internet have given us a wealth of knowledge at our fingertips.

With online media in particular, there has been a huge surge of popularity for independent publications (particularly left leaning ones) and the right-wingers seem desperate to quash this movement.

Society has found a platform to voice its theories and beliefs that oppose the extreme manipulation techniques of the mainstream media and government. People around the world can come together to spread hope and confidence, shoot down mainstream lies, and engage in debate and movements.

It comes as no surprise that the Tories are worried about this form of education as well: in their 2017 manifesto, they announced plans to regulate the internet, including restrictions for what people see on Facebook and Google.

Why wouldn’t the Tories want people to be educated?

People without much education have fewer chances to challenge the over-simplified views of the world they grew up with. Their time and mental energy is spent working, paying bills, perhaps socialising at the weekend with friends from their childhood – just generally trying to survive.

Many of these were subject to a robotic compulsory education system and then immediately pushed into a job they perhaps never wanted to begin with. Where is the opportunity for them to break free from the ideas that their parents may have inadvertently passed on? How will they learn that the negative stereotypes perpetuated by the right-wing media, which blame minorities of people, are nonsense?

There is little room for people in such a position to explore life outside their bubble of hardship – and it appears that this is exactly how the financially superior right wingers want it to remain, by attacking the ways that enable people to do this.

The Tories are at war with education

There are some who understandably vote for the Tories – the rich and powerful generally benefit from the right-wing policies and vote selfishly, regardless of the misery it causes many. The infuriating ones are the “turkeys voting for Christmas”; people who would benefit from a left-wing government but who continually vote Tory despite this.

However, it’s all part of this mass manipulation and restriction that keeps them towing the line and being incapable of free thought. By systematically destroying people’s ability to learn things outside of the ‘bubble’ they grew up in, Tories are hoping that their struggling victims will continue to embrace right-wing propaganda; this is what will allow the government to continue their reign of terror.