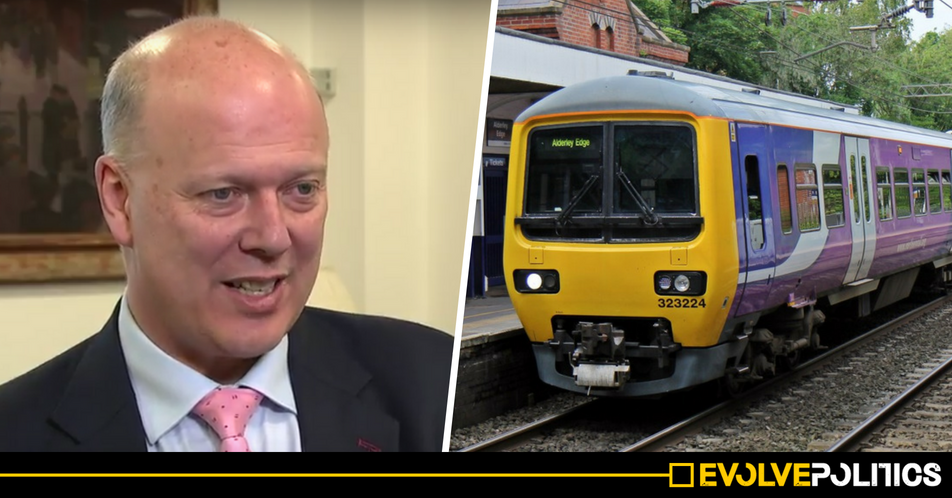 In what sounds like a self-fulfilling prophecy, the Conservative Transport Secretary Chris Grayling has been forced to cancel meetings with numerous MPs about the ongoing timetabling chaos overseen by Northern Rail due to his own shoddy timetabling error.

After Grayling had sent around a memo informing MPs that he would no longer be able to attend the urgent meetings, an obviously exasperated Labour MP Lisa Nandy – who was one of the numerous MPs wanting a quiet word with the Transport Secretary – wrote on Twitter:

“You literally could not make this up. Chris Grayling is having to rearrange or cancel meetings with MPs about Northern today because he underestimated demand and cannot make the timetable work”

You literally could not make this up. Chris Grayling is having to rearrange or cancel meetings with MPs about Northern today because he underestimated demand and cannot make the timetable work

Months of strife, inefficiency and delays have held up Northern Rail passengers for months. The performance and reliability graph by Trains.im reflects this deterioration of service; showing that from the first of April 94.5% of trains ran on time, plummeting to just 57.5% on the first day of June.

After new rail timetables were introduced on June 4, commuters found that instead of increased service, they were now seeing 165 FEWER daily services until the end of July – 6% of Northern Rail’s total services. Areas affected include Manchester, Liverpool, Blackpool, Oxenholme and Windermere.

According to the company themselves, this was “to help reduce last minute cancellations.” This, rather unsurprisingly, failed to have the desired effect, as the Telegraph reported that “by 8.30am, over 60 trains had already been cancelled”.

[Chris] Grayling should get out, the private companies he is propping up should be sacked and the vital rail services the nation depends on should be returned to public ownership

this prime minister is so enfeebled that she cannot dismiss him, so he’s not going to resign. She can’t dismiss him.

With Parliament now finally back in session, Grayling was probably hoping to quell some of the backlash through meeting affected (primarily Northern) MPs.

However, in a deeply ironic twist, Grayling’s own timetabling issues meant that he was unable to do so, instead asking MPs to ensure they are “as flexible as possible” and to consider meeting “in a small group“.

More real-life Thick of It in Westminster today:
The MP meetings with Transport Secretary Chris Grayling to discuss train cancellations have been…. cancelled: pic.twitter.com/BodyLReksK

It was an utterly ridiculous situation which begged the question as to the true extent of his surprise at the “very large number of colleagues asking for a meeting” – something which, oddly enough, does tend to happen during a department-specific crisis.

Failing to anticipate, and then respond to errors made under his favoured form of privatised rail, is heinous enough. But Grayling, by not meeting with MPs desperate for answers for their constituents, is making a mockery out of the democratic process.

His own Prime Minister may be too spineless to hold him to account, but the Transport Secretary resembles a politician recusing into his own shell. His speech, set to be delivered at 5.30pm today, should shed some light on the issue.

Grayling is not new to political gaffes, having inadvertently handed the Labour Party an ideological victory just three weeks ago. Announcing that the East Coast Mainline, having been privatised in 2015, will be brought back into government hands, the Cabinet member was hilariously challenged to admit that he renationalised a railway.

Other notable decisions include failed plans to build execution centres for Saudi Arabia, and spending £6 million on a cancelled “secure college”.

It makes one wonder whether Chris Grayling may perhaps have been more suited to his former, albeit briefly held role:

In any sense, yet again this is turning out to be a week of embarrassment and blunders for the Tory Party – and it seems for once, Theresa May cannot deflect blame from her incompetent Cabinet.