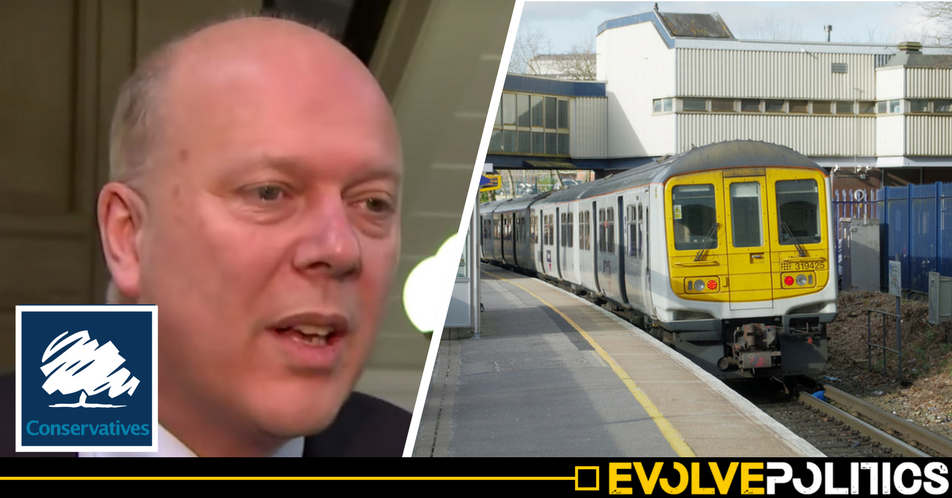 Anyone commuting by train whilst listening to the Today programme this morning would likely to have choked on their coffee as Transport Secretary Chris Grayling explained repeatedly (2:33:12) that the problems with the railways were all down to ‘militant trade unions’:

Nothing to do with the utterly failed policy of privatisation, nothing to do with lack of investment, with franchises given to companies who probably shouldn’t be left in charge of a pair of roller skates, never mind an entire railway network. No, Grayling said. That was all wrong, because:

The independent report I commissioned said very clearly that it was the unions who were primarily to blame.

The ‘independent report’ – which some might say seems rather lacking in, well, independence – does indeed blame the unions. Which is very convenient, and allows Grayling to utterly ignore the huge criticisms made by the National Audit Office in a report released yesterday about the Thameslink, Southern and Great Northern rail franchises.

The NAO concludes that a major issue in the recent disruption to services was that when awarding the contracts, the Department for Transport (DfT):

…did not seek sufficient assurance that Govia Thameslink would have enough train drivers.

The NAO also accuses the DfT of failing to take proper account of the fact that Govia Thameslink’s policy of introducing ‘driver-only operations’ (that is, not having a guard on the train) was very likely to lead to industrial action. In other words, all the subsequent problems were perfectly foreseeable to anyone who chose to look for them. This obviously didn’t include the DfT.

Chris Grayling might have thought he was in for an easy ride on the Today programme. Rather than a more experienced hand, his interviewer was Carrie Gracie, the former BBC China editor who just resigned in protest at the gender pay gap, and was brand new to the programme.

But Gracie made clear from her first question (“Are you apologising this morning?”) that she was no pushover. She asked Grayling over and over again (“I still haven’t heard the word ‘sorry”) if he was going to apologise for the DfT’s part in the failures at Govia Thameslink (the answer: not in so many words), and interrupted him repeatedly when he kept going on about the unions (“You’ve said that already. Let’s not repeat that point. The audience has got the message”.)

Grayling had clearly been told, however, that he had to deliver a single message, and he was determined to do so, referencing trade unions and industrial action no fewer than six times in a short interview.

Grayling was defending a system which has no fewer than 24 companies running rail services, a system which is not only inefficient but makes British train travel the most expensive in Europe. Passengers are left baffled by the choice of different tickets and fares, some of which defy belief. Fares are rising at a much faster rate than wages, with a massive 3.4% increase at the beginning of the year. Meanwhile, profits for private rail companies soar and directors of train operating companies get huge pay cheques, even if the service they provide is appalling.

Labour has a clear manifesto promise: it will bring railways back into public ownership – a policy which, unsurprisingly given the state of the railways, has majority support in the country. In fact, anyone who’s taken the trouble to look at the evidence could only conclude that privatisation of the railways was an experiment which should be consigned to the history books, and fast.

As for Grayling, he can repeat his mantra about militant trade unions ad nauseum, but the reality is that he is on a losing wicket. Privatisation of the railways is a disaster for passengers, for railway workers, and for the public purse. No amount of shifting the blame onto ‘militant trade unions’ can change that.