Evolve Politics can reveal that a Conservative student society has entered a ‘sponsorship agreement’ with a masonic lodge.

The University of Nottingham Conservative Association (NUCA), who according to sources have previously held dinners in the company of Conservative MPs at the lodge in Nottingham, told members last week that their sponsorship with the Daybrook Lodge was part of a wider scheme by the United Grand Lodge of England (UGLE) – which is aimed at recruiting students on campuses across the country. This move comes in the wake of the revelation that two secret masonic lodges are active in Westminster for politicians and journalists.

NUCA, one of the largest student Conservative Associations in the United Kingdom, previously hit the headlines for holding a debate on campus on whether women who ‘dress provocatively’ were more likely to be sexually assaulted.

As some of you may have seen we have recently acquired a sponsorship agreement with Daybrook Lodge.

Please take a second to look at the link below, if it is something that you may be interested in or would like to hear more about please get in contact with us.” 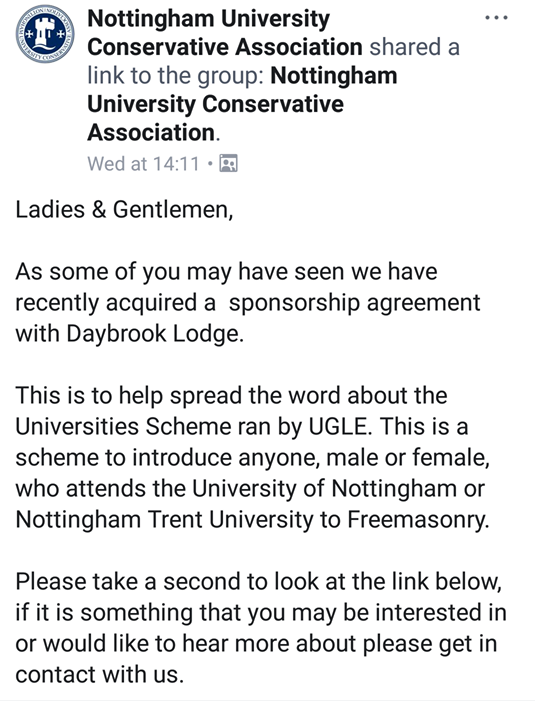 What this displays is a clear link between Freemasonry and Tories on university campuses. Moreover, their invitation to ‘anyone’ neglects the fact that the Daybrook Lodge in Nottingham, like most lodges, is a male-only organisation.

A Conservative source who spoke to Evolve Politics slammed the partnership as “deeply worrying” as it insinuates that the Association is becoming the “total opposite of an inclusive society”.

A spokesperson for University of Nottingham Labour Students told Evolve Politics that:

“This highlights just how out of touch the Conservative Party is. It is deeply concerning that NUCA are being financed by a fraternity that excludes women, and demonstrates how far the Tories have to go on empowering women in their party. Labour is proudly for the many. At Nottingham Labour Students we are proud to encourage the voices of women, and as a party, we are proud to be the party of equality – advancing women’s rights each time we are in government.”

Evolve Politics have approached the University of Nottingham Students’ Union and NUCA for comment.