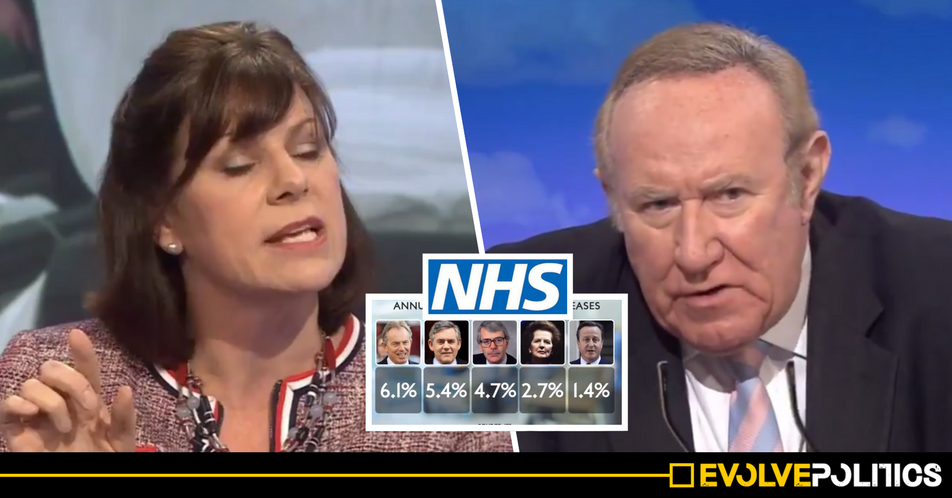 Credit where credit’s due: despite being the Chairman of the group that owns two major pro-Tory publications – The Telegraph and The Spectator – the BBC’s Daily Politics host Andrew Neil is never afraid to hold both sides of the argument to account with forensic and sometimes painfully persistent questioning. And Neil’s interrogation of an increasingly flustered Tory MP over her party’s systematic, and blatantly obvious underfunding of the NHS on today’s Daily Politics was a joy to behold.

Today’s unfortunate Tory MP to be thrown to the wolves was Claire Perry, the MP for Devizes – and it’s safe to say her limp refutations to Neil’s probing questions on the Tores’ management of the NHS certainly won’t have given viewers any more reasons whatsoever to trust the Tories’ with our health service.

Perry began the interview by proudly stating that “every time the NHS has asked for additional funds we’ve provided them“, but after Neil had provided evidence that the amount of money the Tories are putting in is far less in comparison to every other government in the last 70 years, Perry was forced into a hilarious retreat.

After beginning the interview by boasting about the Tories’ record of giving the NHS the money it had asked for, Perry then ridiculously switched tack, attempting to argue that the amount of money being spent was somehow now meaningless, asking Neil “has NHS spending ever been enough? Have we ever heard a year in the last 70 years where the NHS has said we’ve got enough money?”

Neil rightly interjected, mocking the Tory MP by saying “that’s an absurd argument! That’s like an argument for saying ‘let’s not do anything because we’ll never have enough!'”

Neil continued his barrage, stating that “there is no time in 70 years when spending on health has risen by less than 1.4% – that is the lowest in 70 years – so it seems to me obvious that you have a lot of ground to make up”.

Perry responded with another inexplicable line of argument – stating that success shouldn’t be measured by how much was being spent – to which a flabbergasted Neil “No but the government is saying it has to spend more!“

Perry then began digging herself yet another hole, using another already completely debunked economically-illiterate trope that Labour’s supposedly excessive public spending on the NHS and other vital services was the reason for our economic woes, stating that “you’ll remember at the end of Mr Brown’s period, we had the biggest deficit in peace time history – so yes we had 5.4% spending (rise in the NHS from 2008-2010), Andrew, and that left us with the biggest hole in our public finances”.

Not only was Perry’s argument that somehow overspending on the NHS caused the economic crash completely transparent, it was also entirely disingenuous. As everyone now knows, it wasn’t overspending on public services that caused the deficit, it was caused by having to bail out the banksters whose greed and incompetence crashed our economy – yet Tory MP Perry just kept on digging and making excuses for the current Tory-led NHS crisis.

And just to top thing off, Neil responded to Perry’s lame argument by saying “But you supported that 5.4%! The Conservative position was to support Labour’s spending plans!“.

You can watch Neil absolutely destroy the Tory MP below: