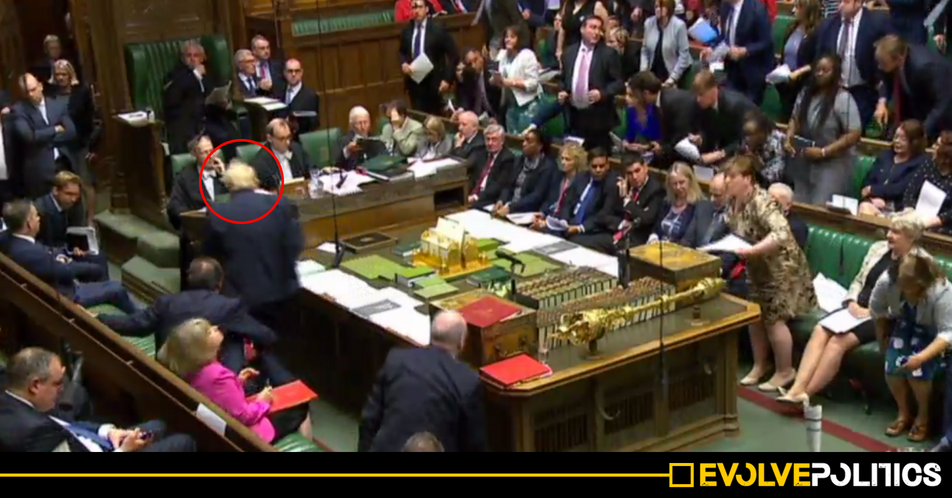 The Foreign Secretary Boris Johnson has invoked outrage after sneaking out of the House of Commons to avoid answering an Urgent Question about what some are calling the Gaza Massacre, in which 58 unarmed Palestinian protestors were shot dead by Israeli forces close to the Israel-Gaza border yesterday.

The latest killings bring the total number of Palestinians killed by Israeli Forces in the past month to an estimated 109.

Added to the devastating death toll, it is estimated that more than 5000 Palestinians have been injured during six weeks of protests dubbed the Great Return March.

Furthermore, despite the BBC and the majority of Western media outlets playing down the killings as simply ‘clashes’ between two opposition forces, no Israeli casualties have been reported whatsoever during a month and a half of protests.

Palestinians had been protesting to mark the annual commemoration of the Nakba or Catastrophe, in which hundreds of thousands of Palestinians were forcibly removed from their homes to make way for the formation of the State of Israel in 1948.

The U.S also inflamed tensions between the two sides further by formally relocating the US Embassy from the Israeli Capital Tel-Aviv, to Jerusalem – a symbolic act which sparked further outrage amongst Palestinians who claim Jerusalem as their Capital.

We condemn unreservedly the Israeli government for their brutal, lethal and utterly unjustified actions on the Gaza border, and our thoughts are with all those Palestinians in Gaza whose loved ones have been killed or injured as a result.

These actions are made all the worse because they come not as the result of a disproportionate over-reaction to one day’s protests, but as the culmination of six weeks of an apparently systemic and deliberate policy of killing and maiming unarmed protestors and bystanders who pose no threat to the forces at the Gaza border, many of them shot in the back, many of them shot hundreds of metres from the border, and many of them children.

Throughout that six-week period, the UN’s Secretary General has been calling for an independent investigation into these incidents, one that should urgently determine whether international law has been broken, and hold the Netanyahu government to account for their actions. The UK should lead calls for the UN Security Council to order such an investigation today.

These incidents must also be the catalyst for urgent and concerted international pressure on the Netanyahu government to lift the blockade on Gaza, and end Israel’s illegal occupation of the Palestinian territories. No longer can Netanyahu act as a law unto himself, under the protection of the Trump administration, whose decision to move the US embassy to Jerusalem today has further inflamed the situation.

In the meantime, we urge the Israeli forces serving on the Gaza border to show some long-overdue responsibility to their fellow human beings, and stop this vicious and utterly avoidable slaughter of peaceful protesters demanding the right to return to their homes.”

Thornberry was then granted an Urgent Question in the House of Commons to force the Foreign Secretary Boris Johnson to make clear his position on the incredibly serious issue.

However, rather than stand up to scrutiny, Boris decided to sneak out of the House of Commons to avoid answering the question – a move which was branded as ‘appalling’ by Labour MP Richard Burgon:

I’m not obsessed with Parliamentary procedure and convention and the like but I do feel it is appalling and telling that Foreign Secretary Boris Johnson walked out of the House of Commons Chamber rather than answer Emily Thornberry’s Urgent Question on the killings in Gaza.

Boris Johnson is supposed to be our foreign secretary and represent the British people. It’s shame that he has walked out of the Westminster chamber to avoid questions on Israel’s massacre of Palestinians, one was a eight month old baby. #GazaMassacre #Gaza

“We are concerned by the reports of violence and loss of life in Gaza,

We urge calm and restraint to avoid actions destructive to peace efforts.

The UK remains firmly committed to a two-state solution with Jerusalem as a shared capital.”

Just a month after Theresa May used the protection of human life as an excuse to bomb Syria, she has now refused to even bother condemning the killing of 58 unarmed protestors by Israel.

It is blatantly obvious from this that when it comes to protecting our allies at whatever cost, the double standards that our government are continually allowed to get away with are truly extraordinary – and they are made all the more disgusting when you realise that the sniper rifles used by the Israeli army to gun down innocent Palestinian protestors may well have been sold to them by the Tories themselves:

A small selection of the weapons sold by the UK to Israel last year:

We are complicit in the slaughter – and must stop these sales immediately.

The UK government don’t care one jot about human life – and their double standards when it comes to Syria and Israel prove it.

However, the very least we ask of our democratically elected government is that they are able to actually answer extremely serious questions so the British public has the chance to scrutinise the positions of the people in charge of decisions.

But as we see time and time again with Theresa May’s constant non-answers and ridiculous rhetorical evasion at PMQs, and now with Boris Johnson’s despicably spineless disappearing act in the face of tough moral questions on Israel, the Tories really can’t stand up to even the slightest bit of scrutiny.

You can watch Boris scuttle out of the debate, as well as Emily Thornberry’s Urgent Question and the government’s response set out by Junior Minister Alistair Burt, below: