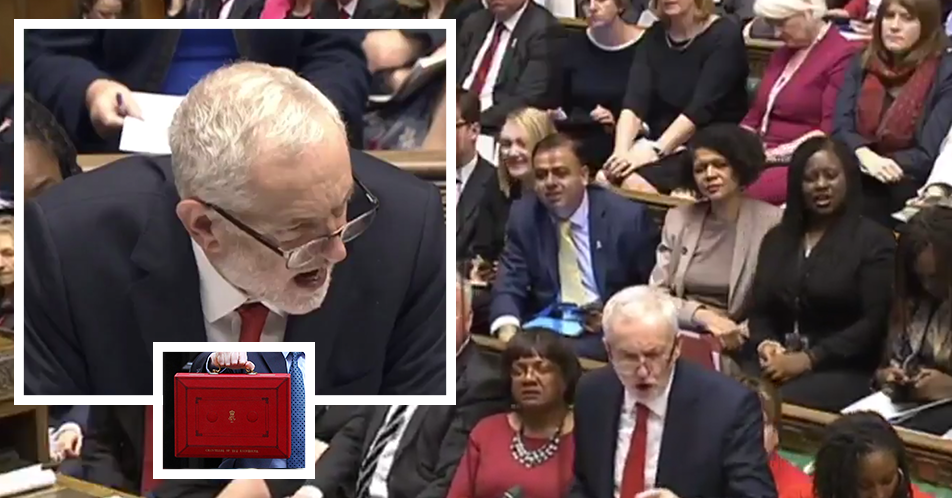 After being constantly heckled by Tory MPs during his Budget response statement today, a furious Jeremy Corbyn finally decided to give some back to the Conservatives, and it was absolutely beautiful to watch.

Earlier this week it was exposed that Theresa May’s MPs are being ordered to shout down Corbyn during his questions at PMQs, and during his Budget response statement today the Conservatives took their level of childish dissent to new and absolutely despicable levels.

During last week’s PMQs, the Speaker John Bercow finally decided to rebuke Tory MPs for a ‘concerted effort’ to shout down opposition MPs, describing it as:

However, the Tories seem to have taken absolutely no notice, and if anything their level of disorder they were allowed to get away with at today’s budget bordered on the absurd.

After putting up with an abosolute barrage of abuse and heckles from assorted Tory MPs today, Corbyn finally decided he had had enough.

No member of the general public would even dream of braying and howling at someone who was making extremely serious points on child poverty, but for whatever reason the Tories feel they’re entitled to play by completely different rules in the House of Commons.

Speaking on the Tory cuts to social care, Corbyn was forced to stop talking again after another concerted effort by Tory MPs to shout him down.

But rather than wait for the Speaker to actually do something about the Tory disorder, Corbyn simply decided to get angry – and it was fantastic to watch.

The elderly aren’t receiving the care they need. Over £6Bn…

Over £6Bn will have been cut from social care budgets by the end of next March. I hope that the honourable member begins to understand what it’s like to wait for social care, stuck in a hospital bed, or other people having to give up work to care for them.

THE UNCARING, UNCOUTH ATTITUDE OF CERTAIN MEMBERS OPPOSITE MUST BE CALLED OUT.

Do watch Corbyn’s furiously heartfelt rebuke below! You really won’t regret it!