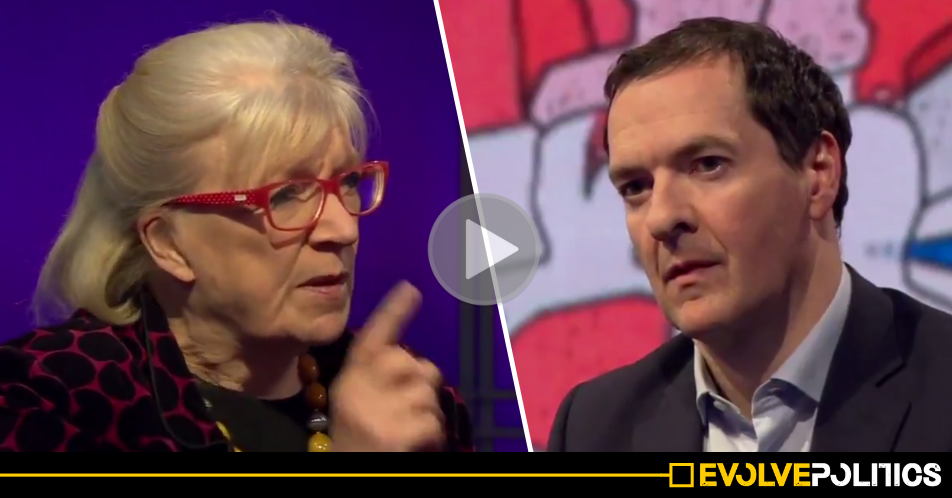 The former Tory Chancellor George Osborne personifies virtually everything that people in Britain hate about modern politics. Not only does his face adorn an incessantly self-satisfied smugness, he is also outrageously incompetent and his rise to numerous positions of power have all been handed to him on a silver platter, courtesy of his fortuitously privileged upbringing.

George Osborne – or Gideon, to give him his real name – was born to multi-millionaire parents, Sir Peter Osborne, the 17th Baronet, and Lady Felicity Osborne, née Felicity Alexandra Lowton-Peacock.

Gideon was initially educated at fee-paying private schools, before being awarded a place at Magdalen College, Oxford, where, in 1993, he graduated gaining a modest 2:1 in History.

Despite his particularly average academic prowess, Osborne’s privileged upbringing – combined with the contacts he made during his membership of the notorious Bullingdon Club, such as Boris Johnson and David Cameron – saw him handed a ridiculously cushy job as the head of the Conservative Party Research Department in 1994.

Osborne quickly went on to become a Special Advisor to a Tory Shadow Cabinet Minister, before being handed the safe Tory seat of Tatton in Cheshire – a seat he won in the June 2001 election.

Despite having absolutely no higher qualifications in either mathematics or economics, Osborne was soon handed a Shadow Cabinet position in the Treasury, eventually going on to become the Chancellor of the Exchequer when the Conservative Party, then led by his fellow Bullingdon chum David Cameron, came to power in 2010.

The Tories had been elected on a promise to get Britiain’s economy into shape following the financial crash of 2008 – an event which, despite being caused entirely by the greed and selfishness of bankers, the Conservative Party managed to successfully blame on the supposed frivolity of Labour’s public spending.

With the British public having fallen for the false Tory narrative hook, line and sinker, Gideon wasted no time in slashing funds to vital public services.

The Tory leadership claimed that the cuts were necessary to get Britain’s finances back in order, with Osborne promising to close and deficit and have debt falling by 2015.

To back up their narrative, the Tories shamefully attempted to divide communities by scapegoating benefit claimants and immigrants for the mess caused by bankers

However, not only did Osborne’s economic plan not work, it created absolute misery for millions of the poorest people in Britain, and decimated vital public services such as the NHS and Schools.

Furthermore, the Tories’ austerity policies *still* haven’t managed to bring Britain’s public finances back into surplus – with the Conservative Party somehow managing to add a whopping £700,000,000,000 to Britain’s national debt since 2010.

In fact, all the Tories have actually managed to achieve is to slash public spending on public services whilst using the savings to reduce tax for their rich mates – an underhand scheme which has conveniently resulted in the richest people in Britain increasing their wealth by a staggering 183% in just 10 years.

Osborne and Cameron were finally forced out of office in 2016 following their catastrophic miscalculation on the Brexit referendum – an event which, ironically, would almost certainly not have happened had it not been for the devastating effects of Tory cuts.

But the absolute incompetence they showed in charge of the country, and their utter disdain for the very poorest in society during their tenure 6-year tenure, saw Cameron and Osborne go down as arguably the most hated political duo in British history.

However, despite being an unequivocal and dangerously incompetent failure, George Osborne landed on his feet after again being handed a cushy job, this time as Editor of the Evening Standard.

There is a great deal to loathe about George Osborne – so seeing his political legacy torn to pieces right in front of his face last night really was as satisfying as it sounds.

Speaking as a panelist on the BBC’s Newsnight programme, the Guardian’s Polly Toynbee tore in to the former Chancellor, branding him as despicable, and rejecting any supposed similarity between her politics and his, stating;

“This man has done such harm and damage to this country.

He has been the most right-wing Chancellor we have ever had.

If you look at yesterday’s budget, if you look at the cuts that are still to come – even if you accept his economic argument, which I don’t because he made the recession deeper by such extreme austerity – if you look at how he tips his cuts, at the billions that he’s taken from the poorest in benefits, and then abused them with endless talk about people with their blinds down, trying to make everyone hate anyone on benefits. Despite the fact that the great majority of them – as you well know – are in work, and often working two jobs, and if they had their blinds down it was probably because they had been working all night.

Your treatment of the poorest people in this country has been despicable. And I would want to be in no way associated [with being on the same political spectrum as Osborne].

Nor do I think that your ideas are in the [political] centre. The idea that he’s [Osborne] a centrist! I mean, you can talk about gay marriage – you’d never have done gay marriage if Labour hadn’t done civil partnerships. I mean if that’s all you can find that you did that was progressive!”

During Toynbee’s rant, Osborne’s face turned from one of utter unadulterated smugness, to one of absolute despair – and it was an absolute joy to watch.

You can watch Osborne’s political legacy being ripped to shreds before his very eyes below:

Few people are more responsible for the catastrophic situation this country is in than @George_Osborne. He was just shredded on national television by @pollytoynbee for hammering the poor, for demonising them, for the misery he unleashed, and good lord, it was glorious. https://t.co/fGRYk2tikk

The best 88 seconds of television in town. George Osborne finally gets the medicine he deserves. Inspiring stuff from @PollyToynbee. pic.twitter.com/VNfPVuD7UU

Painful to watch @George_Osborne almost concede his time at the helm with Cameron was an unalloyed political disaster.

speaks for many of us when she sticks it to George Osborne https://t.co/vuTK2xFpL4

My thoughts are with George Osborne’s career at this difficult time. #newsnight pic.twitter.com/ehjnMKLmDe