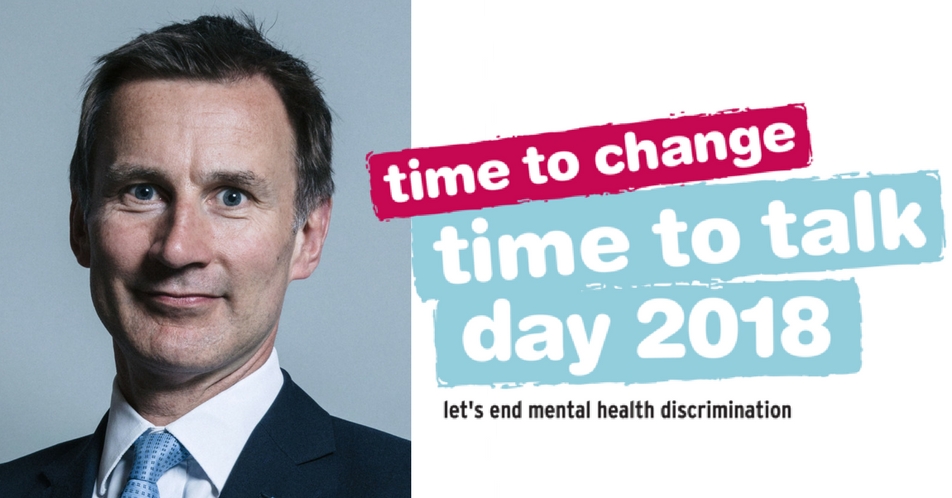 Government cuts are driving more and more people to take their own lives, and rates of anxiety and depression amongst unemployed people have soared after seven years of failed Tory austerity.

Jeremy Hunt’s solution? No, not to take action to reverse the appalling cuts which have led to so many people feeling they have no option but to take their own lives. Instead, he’s launched a suicide prevention campaign aimed at NHS patients:

Every two hours, someone will take their own life in this country – and three-quarters won’t have talked to the NHS about their mental health. Listen to @samaritansruth on this #timetotalk pic.twitter.com/UhbbYVidk8

Just to be clear: a suicide prevention campaign is undoubtedly a good thing. If more people can be encouraged to talk about mental health conditions, or open up about their own feelings, that’s a positive development. But to launch such a campaign whilst other parts of your own government are actively doing everything they can to make people’s lives as insecure and desperate as possible seems rather cynical.

There’s evidence that austerity has led to an increase in suicides and it’s not hard to find individual stories of despair: the disabled grandmother who attempted suicide after being told she was losing her benefits; the man who set himself on fire outside a Jobcentre; the woman who took her own life after a failed Personal Independence Payment appeal. These are just a few of the multitudes of such stories.

And whilst the government continually refutes any link between their policies and a sharp increase in mental health problems, a 2015 briefing paper by Psychologists Against Austerity has this to say about austerity:

The report goes on to call cuts to public services and welfare benefits ‘avoidable and immoral’.

And it’s not only welfare cuts that are the problem. This government has also overseen huge cuts to mental health budgets and a big loss of psychiatric nurses in the NHS. Recent figures show that over 50% of local NHS bodies are cutting spending on mental health services despite Theresa May’s promises to make mental health a government priority.

Jeremy Hunt recently got into a Twitter spat with actor Ralf Little about mental health provision after Hunt disingenuously claimed that there were ‘4300 more people employed by mental health trusts’ – technically true, but as Full Fact pointed out:

If you take the number of staff working in a set of mental health trusts, as Mr Hunt did, it’s up by over 4,000. But some of those aren’t new people. Some are people who were already there when the trust they worked for got reclassified as a mental health trust.

If you break the figure down, there are fewer nurses and slightly fewer doctors. A big increase in ‘scientific, therapeutic and technical staff’ is what makes the overall figure go up.

And beyond that, the Tories have attempted to change the discourse around mental health, according to Andy Greene of Disabled People Against Cuts:

The Tories have done incredible work in changing social attitudes around mental health. They’re instrumental in the rising hate crime disabled people are facing, by driving the divide between deserving and undeserving, between scroungers and shirkers.

If your benefits have been cut, you can’t access mental health services, and you feel that society sees you as a scrounger, then taking your own life can seem like the only option. Jeremy Hunt would be better employed trying to stop his own government pushing people into the river, rather than making feeble attempts to fish them out downstream.