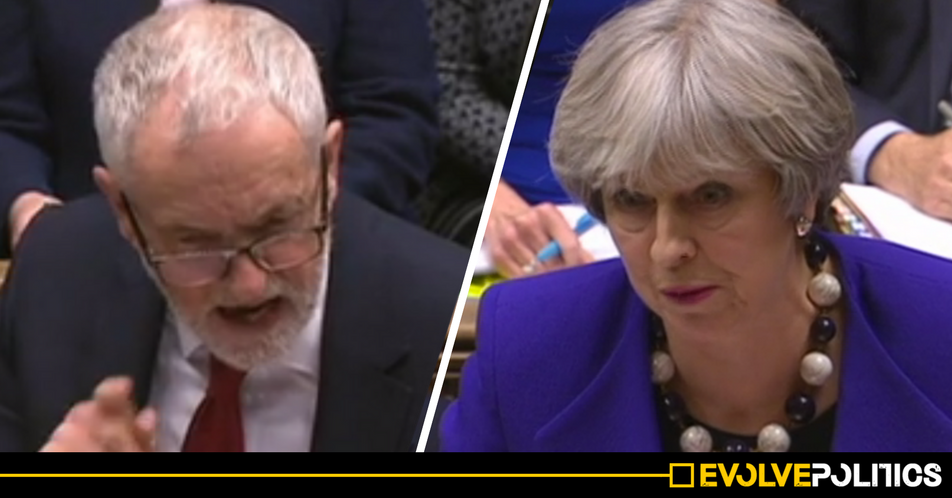 A fiercely passionate Jeremy Corbyn used all 6 questions at today’s PMQs to savage Theresa May over the Tories’ incompetent actions in the lead up to the current Carillion crisis, as well as blasting the Tories for their continued support for an agenda of mass privatisation that has clearly failed the British taxpayer.

The highly energetic Labour leader laid into the government’s blind faith in privatisation, and went as far as to imply corruption between the Tories and some of their favoured private sector contractors, accusing the government of running a ‘costly racket’.

Corbyn used his first question to ask the Prime Minister why they continued handing the now-liquidated Carillion company £2Bn worth of public sector contracts ‘even after the share price was in free fall and the company had issued profit warnings.’

Theresa May’s response was extraordinarily limp, beginning her answer by inexplicably clarifying what exactly a profit warning was, as if the Labour leader was somehow unaware of this self-explanatory procedure.

It might be helpful if I just set out for the Right Honourable Gentleman, that a companies’ profit warning means it believes it will not make as much profit as it had expected to make.

It was a truly dreadful opening response which elicited both laughter from the opposition benches and palpable murmurs of discontent on her own.

Mrs May went on to say:

It would also, for the government, raise real issues about providing continuing uninterrupted public services.

Yes, we did recognise that it was a severe profit warning, and that’s why we took action in relation to the contracts that we issued and we ensured that all but one of those contracts was a joint venture.

After failing to give any assurances with her answer, Mrs May then went on to engage in the age-old tactic of whataboutery, cdiverting attention away from her failings by stating:

For the record, Leeds have not signed a contract with Carillion.

And, according to Leeds Council themselves, they indeed have not signed off on a contract with Carillion, despite the best efforts of The Sun to fabricate a story.

Corbyn used his next question to slam the government for awarding contracts to Carillion despite their share prices falling 90% between July and the end of last year, and even after 3 profit warnings being issued.

Mr Speaker, it looks like the government was handing Carillion public contracts either to keep the company afloat, which clearly hasn’t worked, or it was just deeply negligent of the crisis that was coming down the line.

Noting that the Labour leader had forgotten to ask an all-important question at the end of his statement, a large section of the Labour front bench helped out by clearly asking the Prime Minister ‘which is it?’

However, Mrs May, deviously sensing an opportunity to avoid responding to yet more deeply damaging statements about her government’s truly shambolic conduct in the lead up to the Carillion crisis, stated that:

Mr Speaker, I am very happy to answer questions when the Right Honourable gentleman asks one. He didn’t.

It was a response which elicited cries of ‘absolute disgrace’ from the Labour front benches.

A furious Corbyn responded by stating:

Mr Speaker, I asked the government if they had been negligent or not, and they clearly have been very negligent.

Tory MPs might shout, but the reality is that as of today, over 20,000 Carillion workers are very worried about their future, and the only recourse for them tonight is to phone a DWP hotline.

Corbyn then laid into the Prime Minister, forcefully asserting that:

So why – AND THIS IS A QUESTION THAT THE PRIME MINISTER NEEDS TO ANSWER!

Why did the position of Crown Representative to Carillion remain vacant during the crucial period of August to November when the profit warnings were being issued, the share price was in freefall, and when many people were very worried [about the financial health of the company]?

Theresa May then responded to the Shadow Foreign Secretary Emily Thornberry who heckled ‘are you actually going to answer this question this time?’, by stating:

Can I say to the Shadow Foreign Secretary that I will indeed answer the question, but I know that she herself has praised Carillion in the past for the work they’ve done.

It was a particularly disingenuous statement from the PM when you consider that May’s statement was almost certainly based on the fact that Thornberry once presented the Apprentice of the Year award to an employee of Carillion before any of the profit warnings were issued in April 2015.

Visited Carillion yesterday in York Way and had great pleasure in presenting Dean Riley Apprentice of the Year Award pic.twitter.com/FcoyUH58TB

Hardly praising the company, is it. Seemingly another ‘alternative fact’ from the Prime Minister.

And May’s response to Corbyn’s question was just as meek, stating:

There is obviously now a Crown Representative who’s been fully involved in the government’s response [to the Carillion crisis].

May then attempted to argue that, despite not having someone in the post, the government did in fact have someone overseeing the plight of Carillion in the run up the crisis, stating:

Before the appointment of the Crown Representative, to replace the one that had previously been in place, the government Chief Commercial Officer and the Cabinet Office Director of Markets and Suppliers took over those responsibilities. So it was not the case that there was nobody from the government who was looking at these issues.

That’s a standard procedure. It is sure that there was oversight of Carillion’s contracts with the government during the process of the appointment of the Crown Representative.

To which Corbyn responded nonchalantly:

The Labour leader then went on to slam the financial mismanagement at the top of the company, blasting the fact that Carillion went into liquidation with huge debts and a massive pension deficit whilst paying out ever-increasing shareholder dividends whilst also paying excessive bonuses to directors.

Furthermore, Corbyn warned that ‘as of today, 8,000 Carillion workers on private sector contracts will no longer be paid’, despite the fact that the ‘Chief Executive is going to be paid for another ten months’, before he finished with a flourish by asking the Prime Minister:

[There’s] One rule for the super rich and another for everybody else.

Can the Prime Minister assure the house today that not a single penny more will go to the Chief Executive or the Directors of this company?

May’s response failed to give many assurances that the fat cat bosses of Carillion wouldn’t be swanning off with huge amounts of money whilst leaving the taxpayer to pick up the tab, stating:

He’s raised the issue of bonuses. Of course people are concerned about this issue and are rightly asking questions about it. That’s why we’re making sure that the official receiver’s investigation into the business dealings of the company is fast tracked, that it looks into the conduct of not just the current Directors but also of previous Directors and their actions.

Theresa May then went on to inadvertently criticise her own pro-privatisation ideology by inexplicably arguing that it apparently wasn’t the government’s job to ensure that Carillion was properly managed.

May argued that, as is the case when such public work is outsourced to essentially unaccountable private companies, the government ‘was a customer of Carillion, not the manager of Carillion’ – an enlightening admission from the Prime Minister that continuing the Tories’ agenda of outsourcing vital public work en masse, such as the vast number of contracts handed to Carillion, might not be such a good idea after all.

When Carillion went into liquidation many contractors were still unpaid. This company Carillion were notorious late payers, taking 120 days to pay – placing a huge burden on small companies, four times longer than the thirty days in the Prompt Payment Code that Carillion had indeed themselves had signed up to.

So why did the government allow a major government contractor to get away with this?

Will she commit to Labour’s policy that abiding by the Prompt Payment Code should be a basic requirement for all future government contracts?

The Prime Minister’s response was incredibly weak yet again, failing to give any assurances or ensure the government would commit to actually learning from their mistakes in the Carillion privatisation debacle.

Corbyn’s final question was the one he had been waiting for – a crucial climax that suggested the Carillion crisis was the inevitable result of the Tories blind faith in under-regulated free markets and a gung-ho, ‘privatise everything that isn’t nailed down’ mantra.

Summing up the increasingly hostile mood of the nation towards the Tories’ failed pro-privatisation dogma, Corbyn asked:

This isn’t one isolated case of government negligence and corporate failure – it’s a broken system.

Under this government, Virgin and Stagecoach can spectacularly mismanage the East Coast Mainline, and be let off a £2Bn payment.

Capita and ATOS can continue to wreck the lives, through damaging disability assessments, of many people with disabilities, and win more government contracts.

G4S promised to provide security at the Olympics and the army had to step in to save the day!

These corporations need to be shown the door! We need our public services provided by public employees with a public service ethos, and a strong public oversight!

As the ruins of Carillion lie around her, will the Prime Minister act to end this costly racket of the relationship between the government and some of these companies?

Theresa May’s deeply disingenuous response bore all the hallmarks of a Prime Minister who knows full well that the days of the Tories’ beloved privatisation bonanza – where taxpayer’s money is so obviously being siphoned off into the hands of the Tories’ super-rich friends – will soon be coming to an end.

You can watch Jeremy Corbyn’s clash with Theresa May at today’s PMQs in full below – it is well worth it: