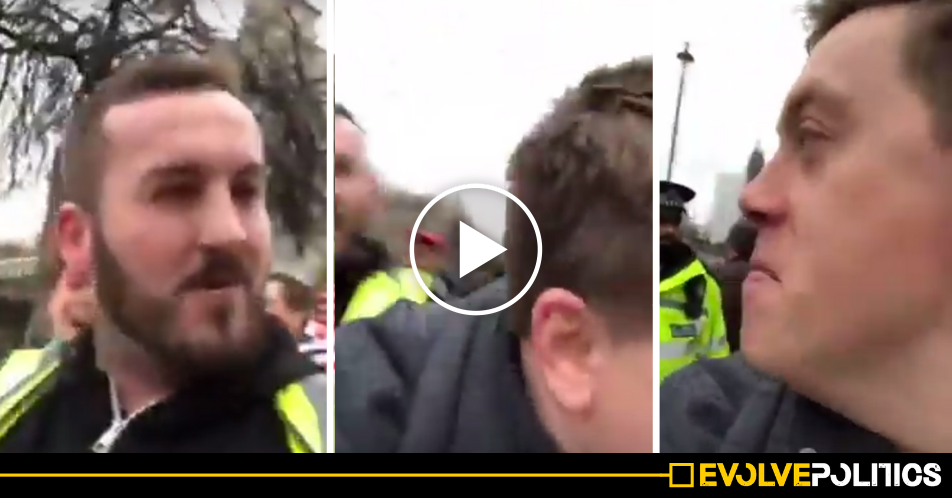 The Guardian journalist and prominent pro-Corbyn activist Owen Jones has filmed himself being viciously mobbed and verbally abused by a group of far-right Yellow Vest thugs as he made his way into Westminster this afternoon.

Jones was labelled a “traitor“, a “tampon“, and, ironically, a “vile vicious little bully“, by the aggressive protestors.

Despite the vicious barrage, Jones managed to stay impeccably calm as he filmed himself being subjected to a disgusting level of abuse from the massed pro-Brexit group.

You can watch the despicable incident below:

The incident has already been condemned right across the political spectrum, with the main protagonist alleged to be James Goddard – a notorious far-right thug.

The bearded man yelling at Owen appears to be James Goddard, who has said No.10 houses "satanic paedophiles" and has called for the deportation of "every last Muslim" from the UK

Just minutes after the attack, Jones took to Twitter to warn that “If anything happens to one of us on the left at the hands of these fascists“, then the right-wing press – who, Jones says, legitimise such appalling behaviour – will “share the blame”.

By the way, the things they’re yelling at me – traitor, terrorism supporter – are all legitimised by the right wing press and politicians. If anything happens to one of us on the left at the hands of these fascists, they will share the blame. Hope that’s clear. https://t.co/SQ3QvppBKv