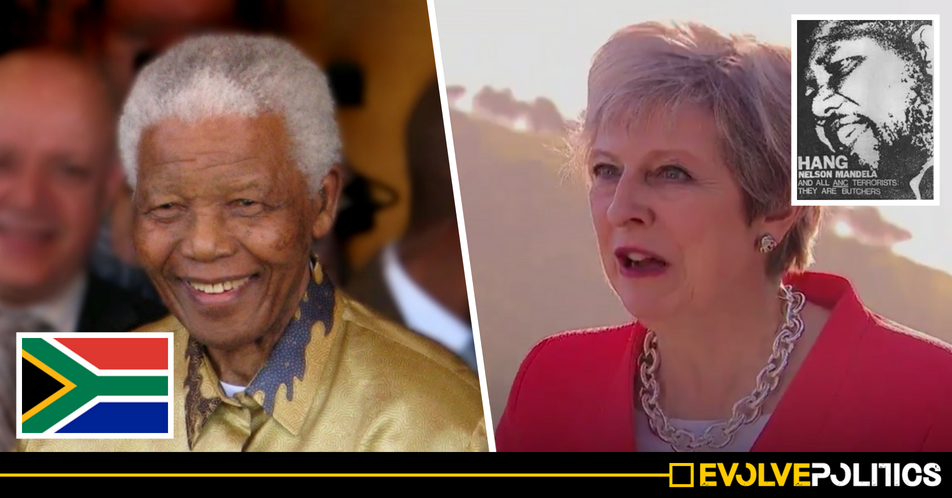 The British Conservative Prime Minister Theresa May has repeatedly refused to deny that she believes that the world-renowned Nobel Peace Prize-winning anti-apartheid freedom fighter, and former South African President, Nelson Mandela, was “a terrorist“.

The laws essentially made black South Africans second class citizens in their own country by implementing laws that forced them to live on reserves, virtually barred them from owning property or land, and banned them from many forms of employment.

Resistance to apartheid came in many guises from within as well as outside of South Africa, with Nelson Mandela and the African National Congress (ANC) becoming the prominent figureheads of the black South African fightback against the NP’s apartheid oppression.

However, whilst the now Labour leader Jeremy Corbyn was getting himself arrested protesting apartheid at a rally outside South Africa House in London, the British ruling Conservative government – then under the leadership of Margaret Thatcher – were branding the likes of Nelson Mandela and the ANC resistance he led against apartheid as “terrorists”.

Not only were Mandela and the ANC branded as terrorists for opposing racism by the British government, the Federation of Conservative Students – the official Tory Youth group at the time – were openly calling for Mandela to be hung, even distributing t-shirts, stickers and posters demanding the murderous action against Mandela.

History has proved that Mandela’s actions in opposing the disgraceful racist apartheid were completely justified, and Theresa May’s refusal to deny that she believed the Nobel Peace Prize winner was a terrorist will surely infuriate large sections of the British public.

Theresa May was speaking before a visit to the jail that housed Nelson Mandela for 18 years, on Robben Island, just off the coast of Cape Town, South Africa.

“Mrs May, you’re about to visit Robben Island – you were active in politics in the 70s and 80s: what did you do to help release Nelson Mandela?”

May initially responded by saying:

“No, what did *you* do? Did you go on protests? Did you get arrested outside the embassy? Did you boycott South African goods? Did you do anything?”

“I think you know full well that I didn’t go on protests Michael.

“But hang on a moment, at that stage Margaret Thatcher thought Nelson Mandela was a terrorist! Were you a loyal Conservative Party member? Did you think the same thing?”

After a deeply uncomfortable pause, and then the habitual “I’m lying again” style gurn, the Prime Minister attempted to force out what amounted to a deeply unconvincing answer, eventually muttering:

“What was important was the support the UK government was giving at the time. Often support behind the scenes, but in other ways too. To ensure that we saw the result that we did in relation to the ending of apartheid here in South Africa.”

“[It was] a government led by a woman who thought Nelson Mandela was a terrorist.

You can watch the full snippet of Michael Crick’s interview with Theresa May below:

Theresa May here, repeatedly refusing to say whether she agreed with Margaret Thatcher that Nelson Mandela was a terrorist pic.twitter.com/F5mOpeMVBA

And you can watch Michael Crick’s full Channel Four News report below: