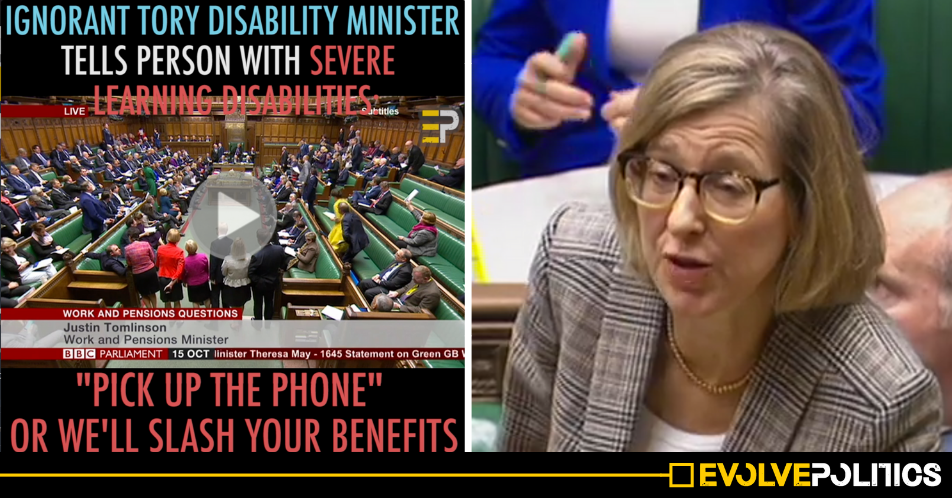 The Conservative Minister for Disabled People Sarah Newton MP hit peak ignorance yesterday by telling a disabled claimant who could not read DWP letters because of a severe learning impairment to simply “pick up the phone” or face having their benefits slashed. Newton has previously been accused of being completely out of touch with disabled people, and after yesterday’s astonishing performance, it’s easy to see why.

Newton was responding to a question from the Labour and Co-operative MP for Brighton and Hove, Lloyd Russell-Moyle.

The Department for Work and Pensions (DWP) had stopped the claimant’s Disability Living Allowance (DLA) payments as they hadn’t responded to DWP letters advising them to claim the new disability benefit; Personal Independence Payment (PIP).

The Labour MP added that, due to their severe learning impairment, his constituent was unable to read.

He ended by asking how are the government going to competently move over disabled claimants to Universal Credit in 2019 when they “can’t even get communication [with disabled people] right.”

The Disability Minister responded in a rather smug tone;

“I was advise your constituent uses the telephone service”

“So pick up the phone and the support will be available.”

The Tory Disability Minister did also suggest that Russell-Moyle’s constituent could have a “friend or family member” ring the DWP on their behalf. However, for many disabled people, this is simply not an option.

Furthermore, with deep Tory cuts to the NHS and social care biting hard, severely disabled people are even less likely to have this kind of support that they so desperately need.

As the Tory Minister delivered her response, the Labour MP Lloyd Russell-Moyle looked on in absolute shock. I don’t blame him, I was equally perplexed at the Tory Minister’s sheer lack of understanding on the issue.

After I posted what Newton had said on social media, people were, unsurprisingly, quick to comment.

Some commented on her complete lack of awareness and understanding of learning disabilities while others shared their personal experiences.

That's horrendous. So, is it possible for someone who is housebound, and doesn't own a computer or smartphone, to claim benefits at all?

The reason I got so angry about this is because I have a son with autism. This could affect him later in life, so getting it right now is important to me.

Not to mention that it is fairly common sense that those with learning disabilities may have accessibility issues. Not everyone have family or friends nearby to help either.

It’s comments like Sarah Newton’s that the Minister for Disabled People should be striving to stamp out, not using themselves.

The UN are visiting the UK next month to investigate how Tory policies like welfare reform have affected poverty and human rights in the UK.

When the UN last visited in 2017 they blasted the government’s austerity policies and described them as  “systematic violations” of the rights of people with disabilities.

In another slap in the face to those with disabilities, Sarah Newton took a year to respond to the report. And, as is usual with this shambles of a government, she simply dismissed the evidence as out of date and inaccurate, as well as deciding that only 6 of the 80 recommendations contained within it were worthy of addressing.

Today’s comments are just more evidence of an out of touch Tory government who care more about statistics than the welfare of the the most vulnerable in society.