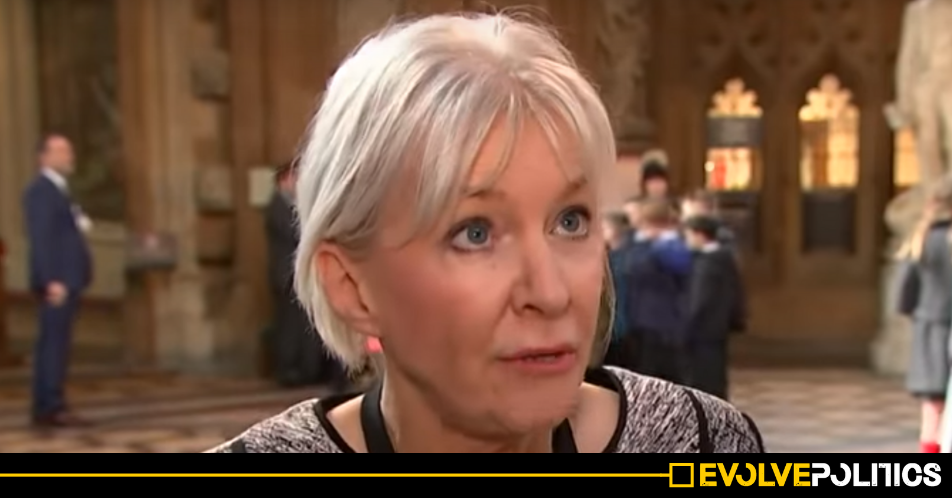 A wealthy Conservative Party MP who has repeatedly voted in favour of decimating pay and conditions for ordinary people has come in for stinging criticism after complaining that, because of the current Brexit fiasco which her own party has presided over, she is now having to work long hours in “unpleasant” conditions, is “sleeping badly” and is, heaven forbid, having to eat “canteen food“.

The arch-Brexiteer and Tory MP for mid-Bedfordshire, Nadine Dorries, tweeted a screenshot of an article from The Times which made the claim that the Brexit debacle had now become so intense in Parliament that there were “fears for the health” of MPs and their staff, and that they could “drop dead from exhaustion“, adding:

Furthermore, on top of her extremely generous taxpayer-funded salary and taxpayer-funded expenses allowances, Dorries also earned £13,000 a month between October 2016 and July 2018 from Zeus Publishing for working just 12 hours a week as an author.

If this wasn’t enough, Ms Dorries also holds a 15% stake in a media consultancy business, and employs her daughter as her Senior Secretary – on, you’ve guessed it, a taxpayer-funded salary of between £24,238 and £34,431.

But, oh no – poor Nadine has to work long hours for a couple of weeks whilst MPs try to fix the utter mess her party has created!

Unsurprisingly, given the fact she earns an income most people could only dream of, added to the fact that she has repeatedly voted in favour of policies which have absolutely decimated the pay and conditions of ordinary workers throughout the country, not a lot of people had much sympathy for her:

Welcome to what it feels like to work in an underfunded, understaffed, underresourced NHS Nadine!

This is an exceptional thing for the Mps. It's the norm for thousands of normal people and government employees. Especially the emergency services. Due to cuts made by Mps who still get their 11 percent pay rise. Welcome to the hard world you have created.

When large parts of society have had nine years of austerity, struggling on the breadline and being sneered at by politicians, you are looking in the wrong place for tea and sympathy. #RealityCheck

Yep it’s been like that in the emergency services for years under the management of this government. And now it’s MPs you suddenly care ?

Welcome to the real world of change delivery. A world you campaigned and voted for so quit whining. Just think though this is the easy bit. Anyone who voted to envoke A50 before gaining consensus on a variety of implementation plans to put forward to EU should be ashamed.

And yet they all, especially yourself, find plenty of time to go on Twitter and tell us how hard life is scoffing in the canteen and yelling your heads off in the HOC.

I work those hours every day,and I travel 500 miles a week to and from work,I dont have the pleasure of having a second home and getting all my expenses paid,,my diesel comes out of my wages

Nadine, Go and talk to our Doctors our nurses our police et al, shiftwork, places to eat proper food removed or declined, working long days constantly. So not a shred of sympathy in the real world.

Aww poor you, wall to wall canteen food, how dreadful! Still, at least it's better than those kids having to eat out of bins as a result of your policies. pic.twitter.com/SnRH4G1LOt

All that and only £77,000 a year. Imagine doing all that and actually being assaulted, spat at and being slagged off by the press in an anti police agenda all for £22,000. Take your head out of the sand and take a look around before whinging to the long suffering public

I can hardly believe you made this comment. You have to be joking! Lots of us work in difficult jobs with the risk of violence, and very long hours. I've been doing it for years to make ends meet. You only have to do it because you have caused a problem, which needs to be sorted.

I cannot think for a minute why some people think MPs are out of touch with the country. Do they actually think before they make such comments how normal people will perceive them. She is an absolute disgrace and needs to try a proper job some time.

In fact, out of the 870 replies she received, Evolve could not find a single supportive comment in favour of the Tory MP.

But when you realise the fact that, in addition to her monstrous earnings and taxpayer-funded expenses, Ms Dorries has also personally contributed to the disastrous situation ordinary British people now find themselves in by repeatedly voting in favour of measures to reduce benefits for people in work and the disabled, voting in favour of reducing funds to cash strapped public services like the NHS and the police force, voting against raising the minimum wage, voting against an energy price freeze, voting for the bedroom tax, voting to scrap maintenance allowances for students, voting in favour of tuition fees, whilst also voting to reduce corporation tax, against raising taxes on the rich, and against measures to curb tax avoidance, it’s not exactly hard to see why so many people are absolutely apoplectic with her pathetic and ridiculously out of touch whining.

Plus, in addition to her brutally unsympathetic voting record towards virtually everybody except rich people like herself, Dorries has also repeatedly opposed laws to allow gay people to marry and repeatedly voted against laws that promote human rights and equality.

Do tell me again, why in the name of all that’s holy do the British public keep voting this lot in? It really does beggar belief.