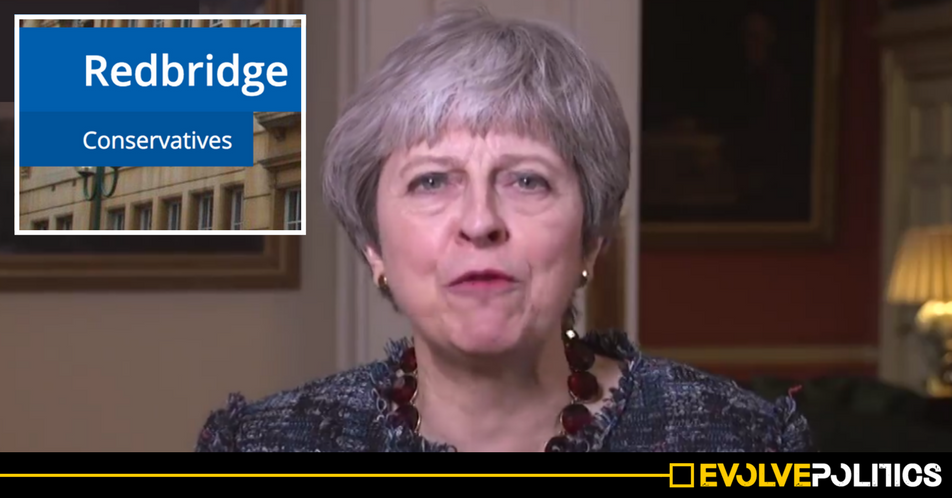 Theresa May proved during her utterly dreadful 2017 General Election campaign that a mixture of hugely unpopular policies, coupled with a truly disastrous track record in power, doesn’t exactly translate well into when it comes to political campaigning. But her fellow Tories in Ilford may well have just outdone even poor old Theresa for completely cocking up their election campaign.

Local elections are a completely different beast to general elections, with national political issues such as Brexit and immigration generally take a back seat, whilst niche local problems like parking, council tax rises and bin collections take centre-stage.

Being able to boast about your party’s proud record in charge of a council will usually go a long way to persuading local residents to return you as a councillor. And for local elections, prospective Councillors will often think long and hard before distributing their all-important campaign literature to the local voting public.

However, the bright sparks at Ilford Conservatives appear to be incredibly confident that they will be able to win the day without even bothering to provide local residents with any such positive messages whatsoever.

Furthermore, astonishingly, Ilford Tories also seem to think that they will be able to win over local residents without even appearing to know which seat it is they are fighting for.

Yes, in a political fail of epic proportions, their all-important campaign leaflets begin by proudly boasting:

We’re working hard for local people to make Ward/Area Name an even better place to live.”

The official Tory leaflets – which some dozy Tory genuinely signed off on – then go on to say:

Three lines of text about what issues/projects/policies you’ve already done or are doing or will be doing in your ward/area.”

The utterly ridiculous Tory leaflet fail was picked up by local resident Phil Stanier on Twitter:

The independent Local Government Boundary Commission only recently created the ward of Ilford Town, and the upcoming local elections on May 3rd will be the first time residents will be get to vote on Councillors in the ward.

Ilford Town is now a ward in Labour-controlled Redbridge Council, and despite Labour having taken control for the first time in the area’s history in 2014, the Tories do still hold 24 seats to Labour’s 36.

Ilford Town Tories’ ridiculous lack of attention to detail in their election literature may perhaps indicate a severe lack of confidence in winning the newly created council seats. Or, conversely, it could just be the fact that they literally have absolutely no idea what they’re doing. We’ll leave it up to you to decide.

Redbridge Labour Party responded to the Tories’ leaflet on Twitter by tweeting:

Thinking of voting Conservative in #Redbridge? Well aside from selecting most of their candidates in the past few weeks they are actually distributing incomplete leaflets like this. They don't respect you, your vote or our borough. #VoteLabour3rdMay pic.twitter.com/7kFQx0tRZ4

A Tory council Candidate in Dudley was suspended yesterday after accusing Labour of bringing ‘hepatitis’ to the local area in his official campaign literature.

Furthermore, numerous other Tory Council candidates have been suspended after huge swathes of alleged racist comments and abuse were brought to the attention of the party.