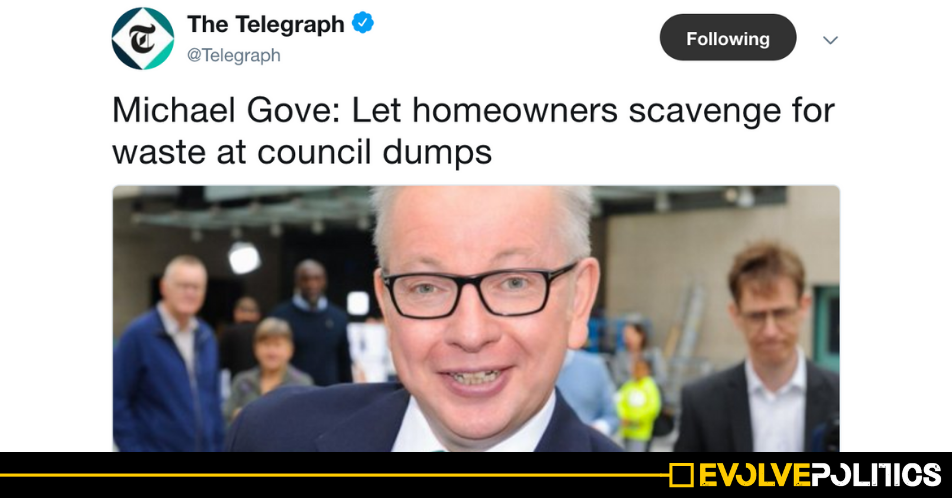 Throughout recent history, the large-scale media coverage given to party conferences has seen them used as a platform to set out a party’s true vision for a better Britain. However, given the fact that Theresa May and her motley Tory crew failed to make any major policy announcements of their own – instead dedicating large swathes of their rambling speeches to attacking the leader of the opposition – you would be forgiven for thinking that the Conservative Party had run out of ideas.

Indeed, despite Tory Ministers and MPs spending large portions of their conference speeches attempting to label Jeremy Corbyn and his ideas as ‘extreme’, the few policy announcements that the Tories did make during the conference were in fact ideas stolen from the Labour Party.

The Tories’ pledge to scrap the cap on council borrowing; their promise to allow workers to keep their tips; and their promise to end austerity, have literally come straight out of the Labour playbook.

In fact, the Tories’ strategy of stealing Labour policies is so ridiculously brazen that Tory HQ have even started briefing their MPs on the line to take when journalists question them over it.

However, despite feebly commandeering Labour policies in a desperate attempt to appease left-leaning voters, it has become patently clear over recent weeks and months that the Conservative Party are not just morally bankrupt, but intellectually bankrupt as well.

Indeed, whilst Labour Conference – and fringe event such as The World Transformed – were awash with thousands of highly enthused individuals and organisations advocating new and visionary ideas to help build a fairer society, the atmosphere at Conservative Party Conference could not have been more contrasting.

Whilst supporters of Jeremy Corbyn were debating the pros and cons of a Universal Basic Income; a vision for the labour market post-automation; and of democratising public services and the media; the vast majority of Conservative Party delegates were embroiled in only one issue: Brexit.

However, to simply cast the Conservative Party’s ever-increasing intellectual vacuity as simply a temporary side-effect of their ongoing internal Brexit row would be entirely wrongheaded. It is far, far more serious than that.

Britain has now endured 40 years of neoliberal consensus – an ideology which began with the decimation of trade unions and a vast fire sale of public assets under Margaret Thatcher, and which only accelerated through the Major, Blair, Brown, and Cameron premierships.

And yet, despite the ‘greed is good‘ ideology which underpins Thatcherite neoliberalism playing a huge role in the culminating financial crash of 2008, and despite forcing the British public to then endure 10 years of crushing austerity – under which 120,000 people are said to have needlessly died – the Tories are still desperate to continue their ideological legacy, whatever the cost.

However, the Tories aren’t stupid enough to think that enough of the British public will simply continue to vote for them out of blind loyalty. Their recent pitiful attempts to address a number of issues at the heart of increasing public discontent, such as the housing crisis and austerity, proves as much.

Yet, despite scattered murmurings from a handful of increasingly worried Tory delegates at conference, the Tories seem particularly blasé about the size of the ticking generational time-bomb they are currently presiding over.

However, whilst so-called ‘moderates’ simply attempt to blame Brexit on the ‘stupidity and racism’ of the working class – and whilst the Tories are busy attempting to exploit the same over-generalisations of the working class – Jeremy Corbyn’s Labour Party are the only party attempting to understand and address the actual reasons behind why Britain now finds itself in this unprecedented situation.

Labour’s latest party political broadcast goes right to the heart of the Brexit issue – addressing the decimation and demoralisation that working class communities have suffered under the past 40 years of neoliberalism:

“Years of austerity have ripped the heart out of this place. But that’s just part of the story. This has been decades in the making. We lost the factories. We lost the jobs. We lost confidence in our community. We lost control.

Once the backbone of this country, we’ve been sold short by a political and economic system that has been unchallenged for far too long. But change is coming.”

Looks like the cat is out of the bag. An EL4C production. #Proud pic.twitter.com/XfyNrRdvvh

Labour’s message has now become so resonant that even one Tory MP – Robert Halfon – has gone on record with his concerns that Labour now pose an existential threat to the Conservative Party:

I am worried. I thought, if I am honest with you, it was an impressive party political broadcast from the Labour Party.

[…] what they are doing is identifying real anguish and anxiety from the British public about the state of our public services and about the cost of living.

But we need to do a lot more because we need to have a skills revolution.

It is true that we have got more people employed than ever before, and a million people now doing apprenticeships.

We need to be the party that cuts the cost of living and stop with stupid gimmicks about putting taxes on milkshakes and think that is what social justice is all about – it isn’t.

We have got to be the party for affordable housing.

We have huge social injustice in our country and there are Conservative solutions to deal with these things.

You’ll not hear this type of sentiment very much from an Evolve writer, but it seems that, for once, a Tory MP has actually hit the nail on the head.

However, rather than take Halfon’s advice and address their blatantly obvious failings, it seems the Conservative Party have opted to go in a completely different, and, frankly, utterly bizarre, policy direction.

Yes, in a statement that was met with sheer disbelief from virtually everybody who resides in reality, The Conservative Party’s Environment Secretary Michael Gove has addressed the truly pressing issues of the day – by demanding that people should be allowed to scavenge through rubbish dumps. Seriously:

Yes, the man who used his parliamentary expenses to claim back £331 for an armchair, £134.50 for elephant lamps, and £493 for a Manchu cabinet he purchased from a shop owned by David Cameron’s mother-in-law, is now telling those affected by his party’s devastating austerity policies that if they can’t afford *luxuries* such as furniture, then they can always get on their hands and knees to rifle through garbage for it.

It’s safe to say that – with Labour’s policies currently even being lauded by Tory MPs and a usually hostile media – Gove’s utterly embarrassing policy proposal could not have been more badly timed.

Whilst Labour are putting forward detailed policies that will actually deal with the vast socioeconomic carnage created by Tory ideology, the Tories are telling people who they have forced to live in poverty that they can always rely on the charity of foodbanks to survive, and are now also able to rifle through bins for household necessities.

Climbing through rubbish heaps in hopes of finding something valuable…

Not just a metaphor for brexit, but part of the actual plan…

Presumably this is what the Tories actually mean by “opportunity”.