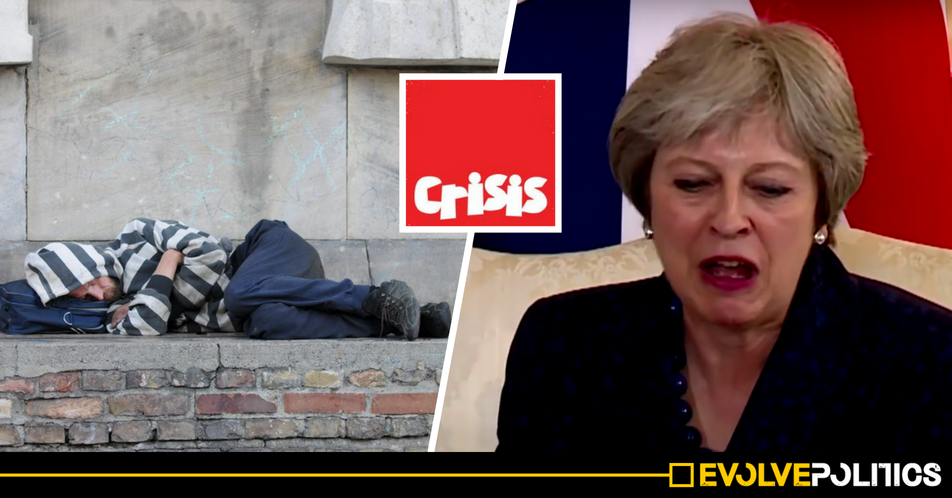 Homelessness is becoming an omnipresent strain in the zeitgeist of modern Britain: sleeping bags on the streets, sad cardboard signs with harried marker pen-scrawlings and the pallid faces of the victims of this country’s widening inequality gulf have become an increasingly common sight.

Crisis, the homelessness charity, estimates that there are now 236,000 homeless people on the streets of Britain and in substandard temporary accommodation currently. Nearly 160,000 households across the country are experiencing the “worst forms” of homelessness. Indeed, that number is expected to rocket to nearly 315,000 by 2041 if nothing changes.

Of course, homelessness isn’t just bedding down on a pile of sodden cardboard in a shop doorway, it’s having nowhere to go and being forced to use a hostel, or someone’s kitchen floor or their sofa. It is not having a home – whatever form that takes. It is undeniable that the rapidly increasing numbers of people experiencing homelessness is a damning indictment of this country’s Government, and of the Tories’ charge of its people.

Not only does a homelessness epidemic in the country undermine any claim it may have to civility and progress, and a foundational culture of empathy for its citizens – utilising the state’s infrastructure to care for the weak and vulnerable – but so to is it a costly mismanagement of resources.

In 2015-2016, in England alone, local authorities spent more than £1.1bn on temporary, reactive solutions to homelessness. Indeed, across Birmingham today council bosses are routinely putting their homeless up in Travelodges. Such an extraordinary circumstance is a sure and certain painting of the council’s lack of resources, its lack of funding and its lack of any intertwined, centrally mandated plan to rid this country of its scourge.

Not only do Crisis’ plans for preventing homelessness save local governments significant amounts of money, but they represent an economic benefit because individuals who otherwise would have been a dependent of the state become useful. There will be increased mental wellbeing, increased economic output and a reduced reliance on emergency or temporary services such as housing and support based services.

Indeed, local authorities would expect to save £26Bn, while the Exchequer would look to save £6Bn. That is because there will be less reliance on the NHS and the criminal justice system – centrally funded institutions that see a large portion of the brunt of homelessness.

Crisis’ plan places its emphasis primarily on the prevention of homelessness. There is no use, after all, to administering a scheme that can do nothing but pick up the plates once they’ve fallen to the ground.

One of Crisis’ recommendations is a strict time limit of 7 days for which anyone can be in unsuitable temporary accommodation. Thus giving the term, ‘temporary’, meaning once more. It also entails the abolition of so-called ‘priority need’.

While not the only form of homelessness, it is certainly the most visible and the most recognised; as well as the most damaging. The average age of death for an individual sleeping rough is 44 and the mortality rate amongst those on the streets is ten times that of the general population.

Again, in tackling rough sleeping, Crisis advocate for an interventionist, proactive approach – reaching out to those sleeping rough in order to get them inside. Importantly, the charity calls for an expansion of ideas discussed during the passing of the largely ineffectual Homelessness Reduction Act 2017. For instance, the imposition of a duty on local authorities to provide emergency accommodation for anyone who is homeless with nowhere safe to stay, and to allow the 8,300 rough sleepers in that position to have accommodation for 56 days – during which time action can be taken to seek out longer term solutions.

Of course, more central government funding to local authorities is necessary. The No Second Night Out has been limited in its success purely because local authorities are failing to take preventative action when they’re approached by people who face the imminent prospect of sleeping rough.

Homelessness is an all-encompassing problem, a drain on society, on the economy and a devastating, dangerous turn of events for the individual. It therefore requires a solution that is similarly joined up, from central government to local, from preventative governmental policies and programmes to reactive, emergency ones.

Of course, the barrage of cuts ordained by austerity has made life unmanageable for low-income households in the private rental market.

As the private rental market has ballooned in price, the assistance afforded through housing allowance, now universal credit, is inadequate. Centrally administered Targeted Affordability Funding, which has pumped £125mn in assistance over the period 2018/2019 and 2019/2020 has failed to address the shortfall. It is a programme playing catchup with skyrocketing rents, and not saving anyone from homelessness.

Crisis calls for an increase in the amount of welfare assistance available to people struggling in the private rental market.

Of course, in order to end homelessness, there needs to be enough homes available.  The inadequate provision of social housing is the other pincer in a claw that has been crushing down on housing Britons.

The fact that there is not enough social housing, provided by the state, to house individuals in need, has led to greater government expenditure to prop up the inefficient private sector. That is, between 2005/2006 to 2014/2015, government expenditure on housing benefit for 1.4mn private tenancies doubled to £9.3bn.

In all, Crisis envisions the necessity for 383,000 new houses to be built per year, including 100,500 for social rent. This involves the necessity to clamp down on private land developers hoarding their land and strengthening the hand of the state to both limit the misdemeanours of the private sector and provide more through the public sector.

Crisis’ report is extensive and comprehensive, and it is revolutionary were it to be taken up by this government. Though, we are sure that is unlikely to be the case from a Tory party full of muddlers and copers, fluffers and fools.

The Homelessness Reduction Act 2017 was this government’s futile attempt at tackling the epidemic. It is a hollow piece of legislation that puts greater, yet no less vague, duties on local authorities who have no practical way to satisfy them since their resources and their funding are being starved. What is required is a joined-up approach that marries every level of government to utilise the full force of the state for the purposes for which it exists – ensuring the safety and security of its citizens.

Amongst its recommendations, Crisis’ report stipulates increased rights for private renters, hospitals, prisons and the care system to be legally required to find homes for those leaving their care, and job centres to have homelessness specialists.

Homelessness is a stain on this country and the housing crisis is its defining iceberg. If a western, civilised nation cannot establish the infrastructure to house its people, then is it all it professes? Now, Crisis has provided us with a blueprint to see it ended promptly. It would require a complete u-turn in the way this government approaches the problem, however – from sweeping up the homeless for the course of a royal wedding, to ensuring there is no such thing in the first place.

However, judging by the shamelessly evasive comments made by a Tory spokesman about the report, it is, unfortunately, a U-turn the Tories look extremely unlikely to take.