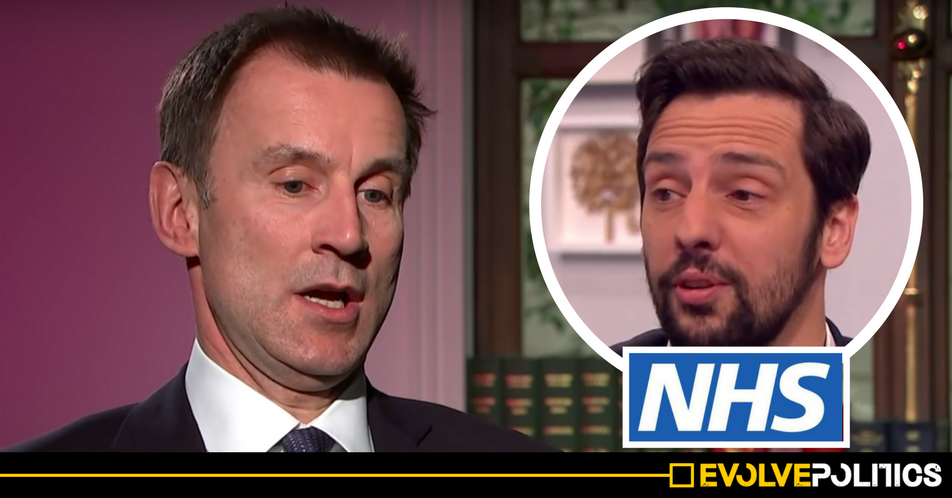 Actor and comedian Ralf Little, who has been engaged in a prolonged feud with Jeremy Hunt about his management of the NHS over recent months, has now upped the stakes by formally setting a date and time for himself and the Tory Health Secretary to publicly debate the issues of resources, staff and funding in the NHS.

Little, who is most famous for starring in BBC comedies The Royle Family and Two Pints of Lager and a Packet of Crisps, has invited the Conservative Health Secretary to sit down with him on February 3rd for a public showdown.

The move follows several months of the pair engaging in a heated Twitter spat in which Little forced Hunt to deny that he had ‘knowingly lying to the public’ about the his record on the NHS.

Jeremy Hunt responded to the 42-tweet Twitter thread by saying that if Little could prove that he had knowingly lied, then he would ‘meet with him to discuss the issues with factcheckers’.

And now, in an open letter published on the People’s Assembly website, Little has taken him up on the offer, writing:

I will be attending the public demonstration in support of the NHS on the 3rd February organised by The People’s Assembly and Health Campaigns Together.

I would like to extend a sincere invitation to you to attend, and use this platform to demonstrate that you acknowledge the importance of our previous discussion regarding lack of resources, staff and funding for our health service.

Little, who initially trained as a doctor before going into acting, continued:

Two key issues of particular concern have been repeatedly raised, even by yourself, with regards to the NHS which would be beneficial for us to debate further.

Firstly, an area I am sure we can both agree on is that patient safety is paramount. However we are now consistently hearing reports of patients dying at home before paramedics arrive, police cars being used to take patients to hospital as there are insufficient ambulances, or that when patients arrive in hospitals they are dying on trolleys in hospital corridors. These are surely the gravest indictment that the current system is failing patients? Many of us are extremely worried about what this means should our loved ones become ill.

Secondly, you consistently raise the importance of openness, transparency and honest discussion as fundamental for progress. With this in mind and with such high stakes for the British public, does it not follow that it is vital that you meet with and have an open and honest discussion with members of the public like myself and the doctors and nurses who have so many unanswered questions?

I would be grateful for a response addressing these concerns and look forward to meeting in person. I can assure the right honourable gentleman that I will provide all of the evidence required when you “double dared” me for the assertions I have made and would be grateful if he could extend the public and myself the same courtesy.

However, Jeremy Hunt is so far yet to respond to Little’s invitation.

Further to his dispute with Little, the widely-despised Health Secretary has also managed to blunder his way into another NHS-privatisation-related Twitter spat – this time with Stephen Hawking, after Hunt incredibly accused the world-renowned scientist of ‘being “wrong” on scientific basis for NHS reform’.

And the situation has now become even more desperate for the Tory Health Secretary after Hawking won permission to take Hunt to court over the ‘back-door privatisation’ of the NHS.

The impending lawsuit relates to Hunt’s plans to hand private companies 10-15 year contracts within proposed American-style Accountable Care Organisations that many fear will lead to huge increases in private sector involvement in the NHS.