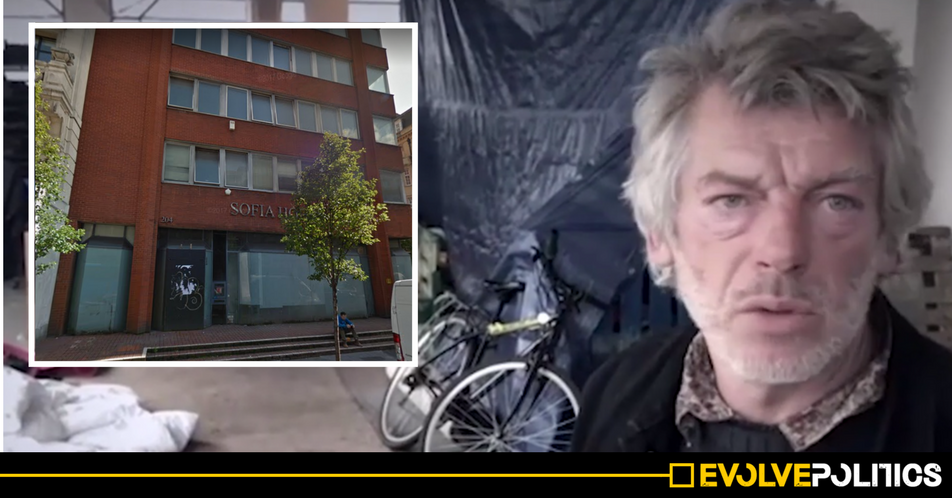 Just as the Beast from the East bore down on the UK and wound its way towards London, grassroots organisation Streets Kitchen found a safe haven for some of the city’s homeless. But now, a Judge sitting at Central London County Court has granted a possession order in respect of the building, condemning all 160 homeless inhabitants back onto the freezing streets once more.

The building, 204 Great Portland Street, which was affectionately renamed the Sofia Solidarity Centre, is owned by W1 Developments – a development company concerned with the regeneration of our capital city. W1 Developments are seemingly but one strand in a structural web, and their majority shareholder is, surprise surprise, registered in the British Virgin Islands – a notorious tax haven.

The owners of Sofia House had left it completely empty for 15 years, attended solely by people tending to it now and then, including Mario Escobar, the handyman. In response, Streets Kitchen moved people in.

Before long, a community hub was created amongst individuals who otherwise would be consigned to shop doorways, huddled in sleeping bags to escape the bitter bullet winds.

Three floors of the building were occupied by people. A veritable hub of community was created. As well as shelter from the cold, the occupied building served as a centralised platform from which homeless individuals could be connected with friends and family, as well as with employment. Indeed, the organiser informed the Independent that at least three people had been put back in touch with family.

Now, the over-160 residents of Sofia House face eviction. While section 144 of the Legal Aid and Punishment of Offenders Act 2012 made it a criminal offence to squat residential properties, the recourse for owners of commercial properties still lies in the civil courts.

As such, W1 Developments applied to the court for a possession order, and they got it. The residents of Sofia House put forward two predominant legal arguments in defence of their occupation, both of which were unsuccessful.

Ok @SadiqKhan, you say tackling homelessness is top priority as Mayor. Over 100 of the most vulnerable rough sleepers in London stand to be evicted from Sofia Solidarity center 204 Great Portland Street this week. Please intervene to save center & help heroes at @streetskitchen

The first was the assertion of the granting of an oral licence by Mario Escobar, the handyman, which members of Streets Kitchen recorded. Escobar had allowed the group that approached him on Friday 2 March to stay in the building over the coming weekend in the face of snow storms. Though he said this was despite fears over his job for doing so, and on the condition that he did not want to arrive back on Monday 5 March to find 70-80 people in the building.

In response, counsel for W1 Developments argued that Mr Escobar didn’t have the authority to grant a licence as he is not, as a matter of law, authorised to make binding decisions on behalf of W1 Developments. In the alternative, it was argued that even if the licence was deemed to be valid, the occupiers had breached its terms by allowing over 200 people to stay in the property.

It is worth remembering two things. Firstly, human rights are only enforceable against public authorities. Secondly, County Court cases aren’t published, meaning that it doesn’t behove anyone to speculate as to the Judge’s reasoning.

Proprietary rights, at the very least as they pertain to commercial properties, must come with responsibilities. This is a matter for Parliament to change the law to make it fairer. It is not right that corporations can leave shops, offices, warehouses and buildings of all description standing languid and empty like husks. They blight the landscape, and they are the emblem of the power and favourability of corporate greed and excess in our society. They stand as dilapidated, broken tributes to the disdain for the poor and the vulnerable that is held by the powerful and the wealthy.

At the parliamentary level, statutory time limits on the length of time commercial buildings can stand empty for may be a start in terms of legislative proposals. Following the expiry of which, they become subject to compulsory purchase by the State for market rate to be put to public use. Policies of this nature are necessary in order to recalibrate the law in this area so that the preference of proprietary rights does not lead to perversions of the kind that has befallen Sofia House.