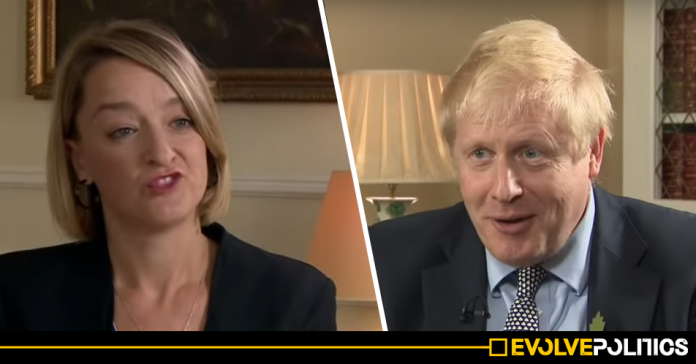 Senior Executives at the BBC have allegedly claimed that they are refusing to expose the relentless lies told by the Tory Prime Minister Boris Johnson because doing so would supposedly ‘undermine the general public’s trust in democracy‘.

The astonishing claim that BBC bigwigs are allegedly covering up the numerous lies told by Johnson was reported by respected journalist, Peter Oborne, in an article for The Guardian.

In the article – which rails against the attitude and conduct of the UK’s mainstream media – Oborne directly claims that:

“I have talked to senior BBC executives, and they tell me they personally think it’s wrong to expose lies told by a British prime minister because it undermines trust in British politics“

Oborne was formerly the Chief Political Commentator for the Daily Telegraph and had been a lifelong supporter of the Conservatives until recently.

The journalist was also a staunch supporter of leaving the European Union, but now backs remain.

Boris Johnson has an astonishing track record of telling outright lies – including lying to the Queen about the reasons behind proroguing Parliament, brazenly claiming to a Channel Four reporter that he never mentioned a potential influx of Turkish immigrants during the EU referendum, which he categorically did, and claiming that he would never support a Brexit deal which puts a border down the Irish sea, which his definitely does.

And just last week, a video emerged of Johnson repeatedly lying to a Northern Irish business owner by claiming that his Brexit deal would not mean businesses in the region would have to complete declaration forms when exporting goods to GB – which they will.

In fact, the Prime Minister’s record for spouting outright lies is so vast that a dedicated website has been set up just to keep track of them – boris-johnson-lies.com

Since the General election campaign kicked off at the end of October, the website has documented 14 outright lies that the Prime Minister has told – amounting to nearly one lie every single day since the election became official.

And just yesterday, Johnson falsely claimed in a speech to the CBI that Jeremy Corbyn was planning to put Corporation tax up to the ‘highest rate in Europe’.

Despite Johnson’s horrendous catalogue of mistruths, the BBC has never once directly used the word “lie” to describe any of his numerous entirely untruthful utterances.

Oborne’s claim that the BBC are covering up the Prime Minister’s lies also comes just days after numerous BBC controversies erupted surrounding what many describe as ‘heavily biased’ reporting in favour of the Conservatives.

And just days before, the BBC used 3-year old footage to report on Remembrance Day proceedings – with many accusing the corporation of intentionally choosing to use historic footage in an attempt to cover up the Prime Minister’s gaffes where he stepped out of line and laid his wreath upside down.

The BBC have not yet responded to Oborne’s astonishing claim.