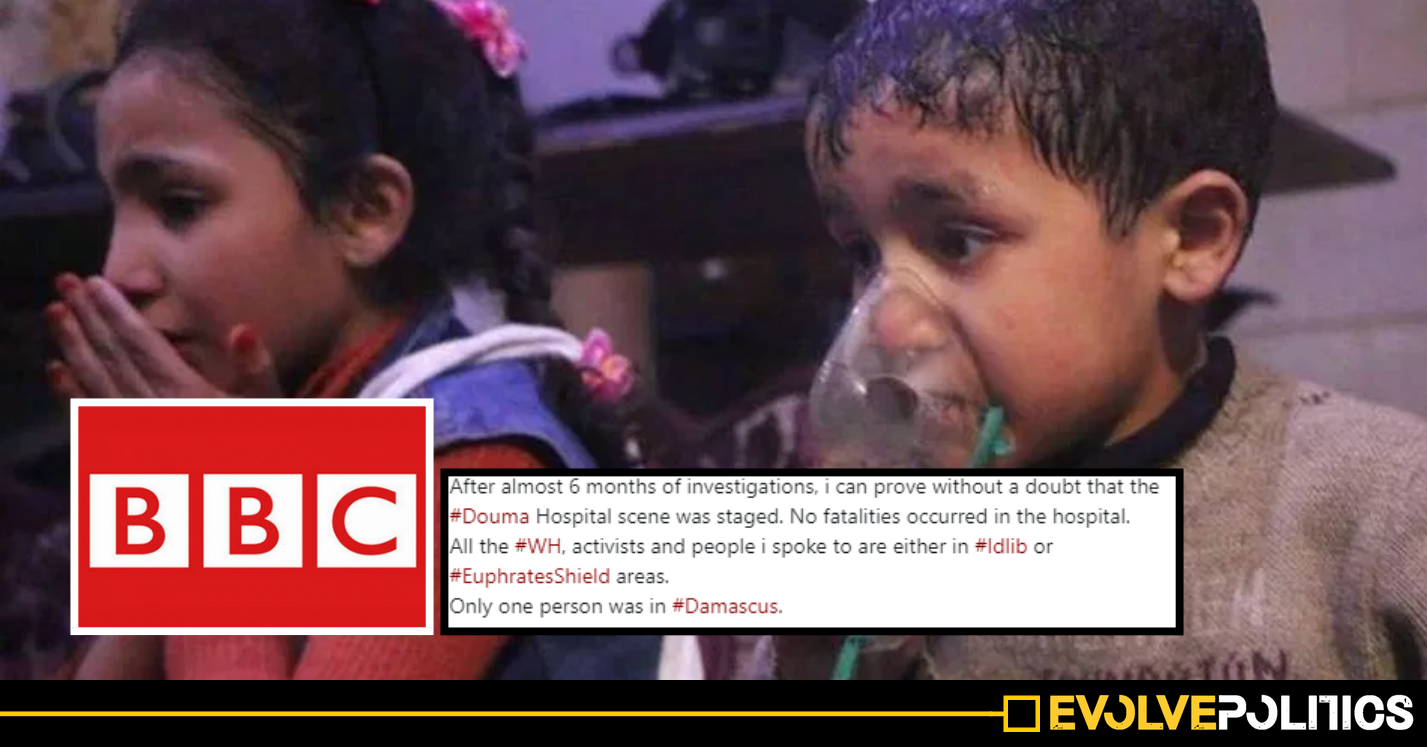 A Producer for the BBC has made the astonishing claim that he can “prove without doubt” that scenes filmed in the aftermath of an apparent chemical attack in Douma, Syria – alleged to have been carried out by the Syrian President Bashar al-Assad and which led to a series of air strikes on the country by Western forces – were “staged“.

“After almost 6 months of investigations, i can prove without a doubt that the #Douma Hospital scene was staged. No fatalities occurred in the hospital. All the WH [White Helmets] activists and people i spoke to are either #Idlib or #EuphratesShield areas.

Only one person was in #Damascus.”

“Russia and at least one #NATO country knew what happened in the hospital. Documents were sent.

However, no 1 knew what really happened at the flats apart from activists manipulating the scene there.

This is why #Russia focused solely on discrediting the hospital scene”

“[…]But never approached the block the block of flats and curtailed access immediately after #Douma takeover.

I can tell you that Jasy al-Islan ruled Douma with an iron fist. They coopted activists, doctors and humanitarians with fear and intimidation.” 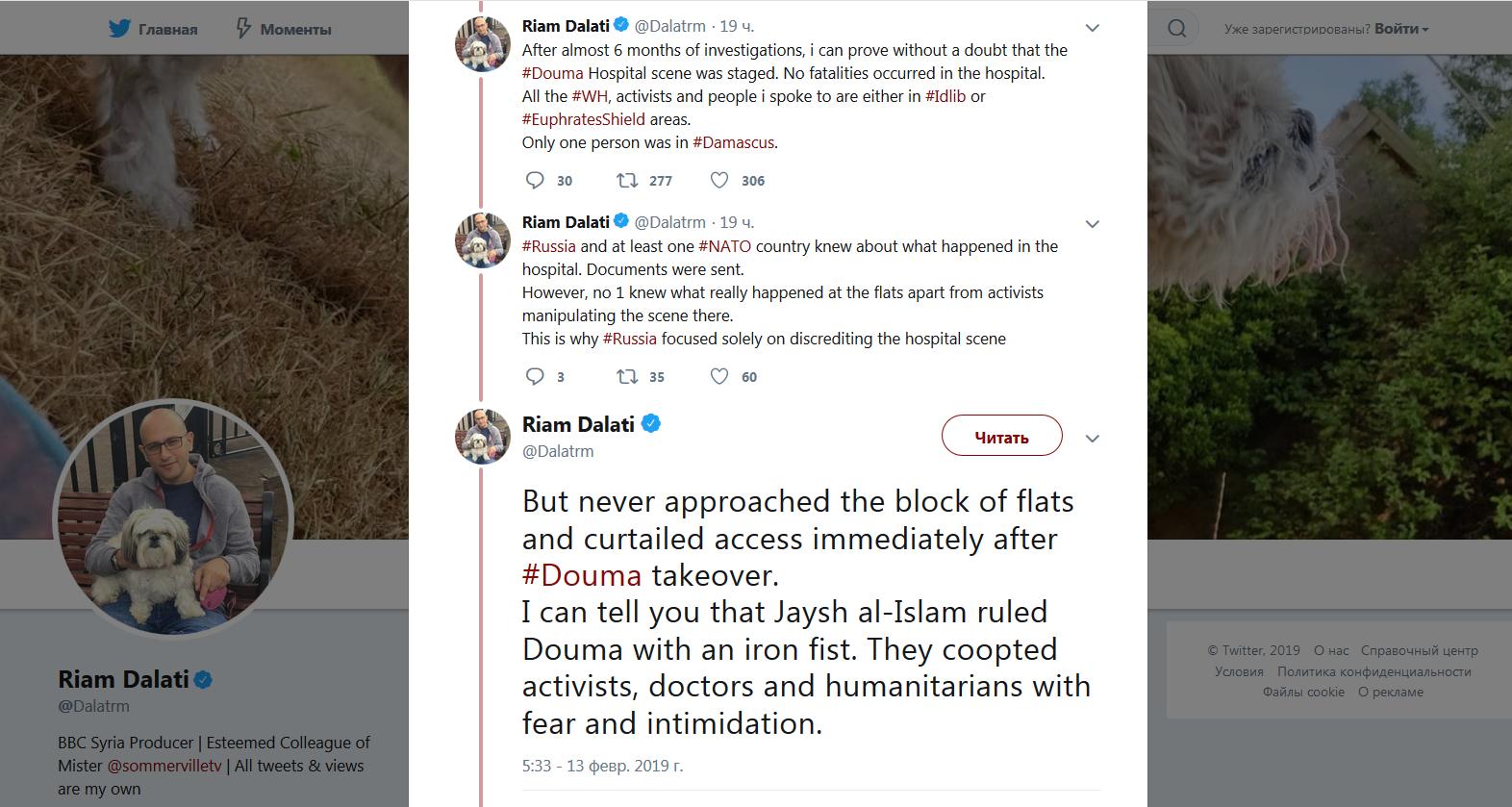 “In fact, one of the 3 or 4 people filming the scene was Dr Abu Bakr Hanan, a “brute & shifty” doctor affiliated with Jaysh Al-Islam. The narrative was that “there weren’t enough drs” but here is one filming & not taking part of the rescue efforts.

Will keep the rest for later.”

However, since publishing the series of explosive tweets on Wednesday, Dalati has set his Twitter account to ‘Protected’, meaning that they are no longer available to publicly view.

However, an archive of his initial tweet can still be found on Google:

Responding to the tweets, the Russian Foreign Ministry has demanded the BBC make their position clear, stating:

“The culmination of this theatre of the absurd may be considered the statements by a producer from Britain’s BBC, who confirmed, based on his own research, the staged nature of the footage with the direct participation of the ‘white helmets”

In eerily similar tweets posted just three days after the alleged 7th April chemical attack on Douma, the BBC Syria Producer has also previously stated that he was:

“Sick and tired of activists and rebels using corpses of dead children to stage emotive scenes for Western consumption.

Then they wonder why some serious journos are questioning part of the narrative.”

Yesterday a BBC journalist (see above) posted a rare admission that #Syria rebels & activists are manipulating photos of dead #Douma children for western media propaganda purposes. Today the BBC journalist has deleted his tweet but, for the record, a screen shot of it is here pic.twitter.com/MvZ9OjHV5P

“Original tweet correctly deemed in breach of editorial policy thru use of ‘sick/tired’ & failure in providing ‘Last Hug’ photo with > context.
Still stand by original opinion that ‘Last Hug’ was staged and can voice that in factual tweet if I want to”

Furthermore, two weeks after the alleged attack in Douma, an 11-year old Syrian boy, Hassan Diab claimed to have been part of “staged” scenes.

The apparent chemical attack on Douma in April was used as justification by Western forces to launch a series of air attacks against Syrian President Bashar al-Assad.

Evolve have previously reported that the investment firm who Theresa May’s husband works for, Capital Group, made a financial killing from the bombing raids.

A fact-finding mission to the area conducted by the Organisation for the Prohibition of Chemical Weapons (OPCW) found no evidence that nerve agents were used in Douma, but did find “various chlorinated organic chemicals“.

Following the release of the OPCW report, numerous Western media outlets – including the BBC – suggested that the findings may prove that chlorine gas was used in the attack.

The Syrian government has consistently denied carrying out any chemical weapons attack.