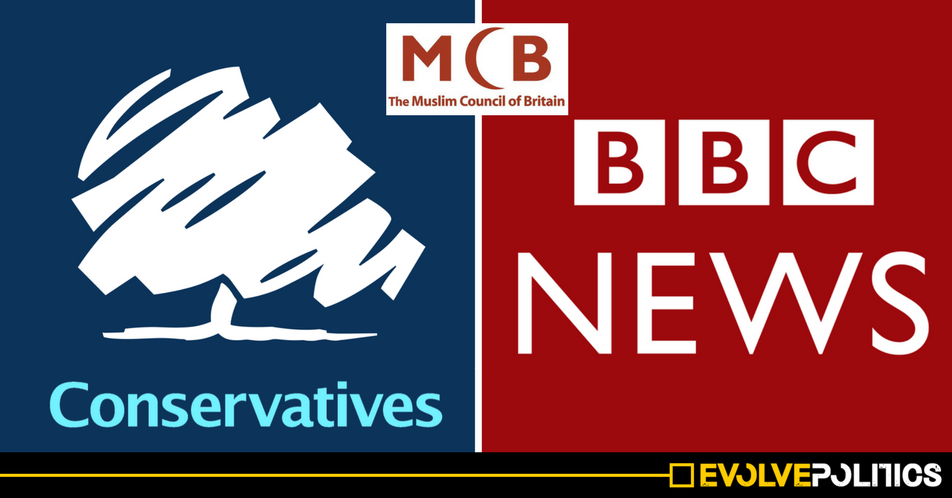 Following an incredible admission made last week by the former Tory Minister, Baroness Warsi, that there are now “weekly occurrences of Islamophobic incidents“ within her Party, the Muslim Council of Britain has demanded an urgent “inquiry into Islamophobia within the Conservative party”.

Despite running essentially wall-to-wall coverage on the recent anti-Semitism storm within the Labour Party over recent weeks, the BBC have so far refused to report on the current Islamophobia storm within the Conservative Party with anywhere near the same level of prominence.

Indeed, three Conservative Council Candidates have been suspended within the past few weeks alone for alleged anti-Muslim hate:

In 2016 – following the Conservative Party’s ‘disgusting’ London mayoral campaign which labelled Labour’s Sadiq Khan as a “closet extremist” – the Muslim Council of Britain (MCB) called for an urgent investigation into Islamophobia within the Tory Party.

The MCB said at the time:

“Just as the Labour Party is rightly conducting an inquiry into antisemitism, it is important for the Conservative Party to reflect upon the extent of Islamophobia in its own ranks. We should have zero tolerance for both antisemitism and Islamophobia”

Not only did the BBC fail to report on the MCB’s demand for an inquiry in 2016, the subsequent lack of pressure from the British media enabled the Tories to get away with ignoring the calls for an inquiry, with the MCB telling Vice News:

And now, following a ridiculous amount of Tory candidates, members and Councillors being suspended for anti-Muslim comments and abuse, as well as Baroness Warsi’s incredible admission last week that there are now “weekly occurrences of Islamophobic incidents“ within the Conservative Party, the MCB have reiterated their called for an urgent inquiry into Islamophobia within the party.

“We would reiterate our call for an inquiry into Islamophobia within the Conservative party, especially given the statement that there are ‘weekly occurrences of Islamophobic incidents’ in the party”

However, in perfect correlation to the BBC’s lack of a reporting of the MCB’s demands in 2016, the Corporation have remained deathly silent on their latest calls for an inquiry into Tory party Islamophobia. This despite running wall-to-wall coverage on Labour’s struggle with anti-Semitism.

It is utterly incredible that, despite their clearly defined impartiality guidelines, the BBC can continually get away with this kind of blatant journalistic double standards.

All forms of racism need to be stamped out, and the only way we will be able to achieve this is by treating all forms of hatred with equal disgust and equal prominence – by calling it out wherever it occurs and by whoever it is perpetrated by.

The BBC’s disgraceful failure to uphold their own guidelines by refusing to  report the demands of the Muslim Council of Britain with anywhere near the same level of prominence as Labour’s recent anti-Semitism storm clearly shows just how low the Corporation has sunk – not just in terms of political impartiality, but also morally in the fight against all forms of hatred and discrimination.