The BBC published a story on Thursday regarding several teachers who complained about ‘cheating watches’ being sold online to aid students in exams.

Seeing as many schools, colleges and universities actively ban even analogue watches in exams, this seemed like a non-story in our eyes.

However, EvolvePolitics has been conducting its own investigation for a number of weeks into this exact subject. We’ve trawled private forums to gain the inside info into the real goings-on in the murky world of modern exam cheating technology. Our findings, quite frankly, have been shocking.

Before the development of smart phones, cheating in exams used to come in many different and ingenious forms. From long-sleeve shirts covering reams of notes scrawled in biro on your arms, to subtler methods like coded taps or coughs, aided by the help of another exam-sitter; the inside-intellectual.

However, modern day cheating has come a long, long way since the good old days. Since the development of the Internet, coupled with the expansion of the micro-electronic industry, exam invigilators have had to keep up with a huge and varied array of devices that students may use to cheat.

During our investigation, our attention was quickly drawn to the new and rapidly expanding market of micro-spy technology. Devices that are almost invisible, extremely easy to hide, and offer students an almost risk-free method of cheating.

There are quite a few products on the market offering different and creative ways to help students cheat, with items varying from bluetooth glasses to 3G camera pens. I’m sure even James Bond would be impressed.

Many products on the market are openly available online and specifically designed to help students cheat. EvolvePoltics found many sites offering such items (curiously, a few retailers also mention that cameras can be used to look up skirts…) to suit all budgets, from earpieces to camera pens. Some items cost over £1,000 – it’s a lot of money, but is it a price worth paying to ensure you pass your exams?

Many students, of course, take exams and hope for a good grade with all the studying they did or by winging it. For some students the urge to pass is simply too great, or an absolute necessity, and thus look in to alternative ways to pass. By trawling through popular student forums, we found a student who admitted to frequently cheating in his exams.

The 16 year old boy, whom wanted to be known only as ‘Rudiger’, is a Year 11 pupil studying for his GCSEs. He, along with two friends, scrimped together enough money to buy a pen with a hidden camera. As they are studying different subjects, they take it in turns to use the pen in an exam. The exam-sitter takes screenshots of the exam paper which is sent to a nearby accomplice who can whisper the answers to them via an almost invisible earpiece.

Rudiger explains to us why he decided to invest in a cheating device. “I really needed to pass my biology exam, I failed the first one. I really tried hard in that exam but I still got an E. My friend suggested I cheat but I knew it isn’t easy as we can’t have phones or watches on us in an exam. He Googled ‘cheat in exams’ and found the pen, it was so expensive but the reviews looked really good. He said he wanted one, and another friend was also keen we all chipped in. I used all my birthday money to buy it but it was worth it.” Rudiger also added that they will sell the cheating device on to other students when he and his friends finish school.

Of course, many students – especially school-aged children- simply cannot afford to spend thousands of pounds on sophisticated cheating devices, no matter how badly they may need one. Rudiger told us that he felt that he “had to [cheat] to pass” and no doubt this is what many students do feel. We have all been students – we know the fear of failure, the late-night study sessions where we attempt to cram our heads with dates and times, as well as the exams where we have done little or no planning for. It really is sad that students do feel like they need to cheat – the education system cares so little for the individual, the emphasis instead is on getting good grades. Whilst I’m not saying that grades aren’t important, other things matter too.

Students should never feel forced to cheat – why isn’t trying their best good enough any more? The companies making money off desperate students are simply using the system to their advantage, with no regard for the student. Students caught cheating in an exam can receive an automatic fail and can also be suspended from their institution. One bad decision could ruin their life before they are even old enough to legally drink.

“Yes I could have been caught but I risked it. I was really scared but it was okay and I got an A in my biology exam so I am well happy!” Rudiger told me. He also said that “invigilators didn’t pay any attention” which suggests that a major problem with the system is a lack of vigilance from invigilators. Electrical devices such as phones and watches are now banned from examination halls but what else can be done to dissuade cheaters? Do students need to go through an airport scanner or be patted down?

However, if ever there was a deterrent from cheating, it is this Amazon review for a watch designed to help students cheat. It reminds me of someone but I simply cannot figure out who… 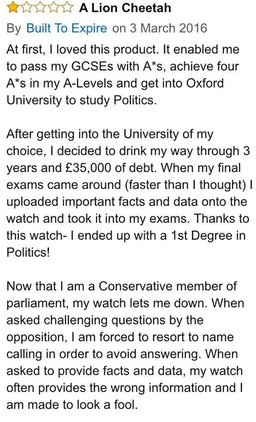